The previous night the u23 had lost by some fourteen points the first time Gibraltar had lost against Wales since the start of the five-match schedule.
Sunday was to see the Gibraltar Under 18s play for the first time facing a much bigger U23 Welsh side.
This time the u18s wanted to bring something different to the court and went and didn’t hold back from quick breaks from the start.
Stuart Felices was on the line for the u18s which brought a different strategy to the court.
Gibraltar’s determination not to fall back too early saw them bring the score to a 5-4 for Wales.
Gibraltar’s U18 we’re struggling to stop the long shots as Wales added another three to make it 8-4, then another two from distance for the 10-4.
Right on the buzzer before being timed out Gibraltar made it 10-6 but stealing in defence didn’t convert the quick break and missed a chance to come even closer.
Not defending the outer perimeters Gibraltar allowed Wales back in again with a further three points to make 13-6 and then adding another for the. 15-6 as Gibraltar failed under the hoop.
Gibraltar’s attempts at the three points were way-off from any threat giving the ball back to their opponents who were also proving superior in defensive rebound.

The first quarter was a steep challenge for Gibraltar who although showing determination allowed Wales to keep command of the scoreline.
After some five attempts Gibraltar finally scored to cut the score to 15-8.
But Wales were as resolute in keeping their points gap and soon added another.
Gibraltar finished the first quarter trailing 17-9.
Gibraltar started the second quarter grabbing the first two points. Although moving the ball well Wales we’re closing Gibraltar down well and didn’t allow them to step away by grabbing their own two in a second attempt.
Gibraltar’s response was a good one with a good turn under the basket to feign a shot before grabbing their next two points.
A clever play by Cassaglia giving himself space to notch a further two as Gibraltar cut the deficit to four at 19-15.
The conversion of two free shots and then regaining possession and driving their way under the hoop saw Wales take their lead to a 23-15 with six minutes still on the clock for halftime.
Gibraltar were again failing to effectively stop players taking a shot for a three pointer by focusing their defence into the middle and allowing more space from just outside the perimeter. This allowing Wales to go ahead 26-15.
Immediately after Gibraltar had performed a brilliant quick pass move for their 17th point wales tempered the crowd with a three point having been given ample space.
The crowd were treated to some excitement as Gibraltar responded with another quick pass play to score again. With four minutes for half time the score now at 29-19 in Wales’ favour but with Gibraltar still showing a lot of bite in their game.
With the crowd rising to the occasion Gibraltar added another to cut it to a 29-21.
An intense final minutes of the second quarter was seen as Wales went 31-21 ahead but found themselves with a determined Gibraltar u18s supported by a vociferous crowd pushing them on.
The two were to arrive at the halftime break with Wales leading 39-26.
The positive signs seen in the first half of the game where Gibraltar had moved the ball about well and confidently continued from the start of the third quarter. However, so did their scoring rate not converting their first nine attempts whilst Wales scored two out of three, one of them a three pointer to go 44-26 ahead within the first three minutes.
Gibraltar did not lack determination but saw Wales add another two points on the scoreboard which could have been three had the player not missed he was just about stepping inside the D.
Gibraltar finally scored with a three pointer with over four minutes gone to make it 46-29.
Possession did not seem to be a problem for the Gibraltar U18s. Instead it was the effectiveness under the hoop. The the first half of the third quarter Gibraltar having greater possession and more attempts than Wales but it was the visitors notching up the points.
Wales had a moment exerting themselves on court which saw some easy steals, although this was also a moment the momentum was lost on both sides with neither scoring.
Gibraltar was to add three points with three minutes left to make it 48-32 giving the crowd something to cheer for.
A hot, stuffy Tercentenary Sports Hall with little air running through the hall was starting to play its role as the initial intensity of the first half was lost. The visiting side looking slightly more sluggish than the hosts, although doing enough to keep their momentum forward and keeping their lead intact.
Wales with two minutes left on the clock for the end of the third quarter 50-32 ahead.
Gibraltar added two points after some confident passing and deliveries. However, Wales response was immediate and delivered their own two points and a chance to step further ahead with a free shot that they did not convert.
It was Wales again who opened the scoring in the fourth quarter.
With a comfortable lead Wales did not look hurried on the court. The fourth quarter was to be a low scoring final quarter for both sides.
They were to cruise to a 65-49 victory, the second Welsh victory from four matches played. Although the Welsh’s slowed down pace allowed Gibraltar to cut the deficit having been 18 points ahead at one stage. Tiredness playing its part whilst Gibraltar’s youngster were playing for pride in front of their home crowd. A respectable number of spectators turning out to watch and filling half of the stands.
The defeat, although highlighting some issues was to provide many positives. The Gibraltar U18s showing confidence in their passing game which had provided many chances and space for their shots. The conversion rate not matching that same confidence and determination.
The fifth and final match will see Gibraltar’s senior squad play Wales senior squad. 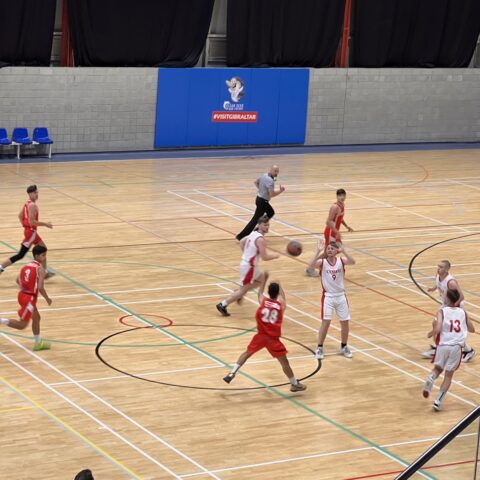 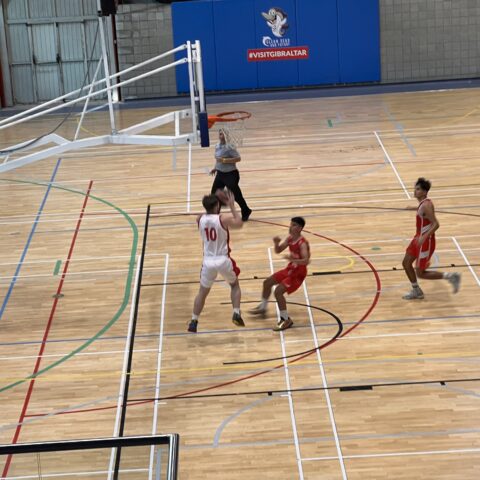