Wembley, venue for UEFA 2020 final, was once home to Gibraltar’s evacuees

Many of us watching Europe Cup 2020 final being played at Wembley are, perhaps, not aware that Wembley was commissioned by the War Office to accommodate over 400 Gibraltar evacuees from August 1940 till July 1944.

By early September 1940 there were in London 12,000 evacuees accommodated in institutions, flats and hotels which were converted into evacuation centres.

Despite the Blitz, by early 1941 the London Gibraltarian Football Association was already founded under the sponsorship of the Ministry of Health and presided by Mr Farrow. 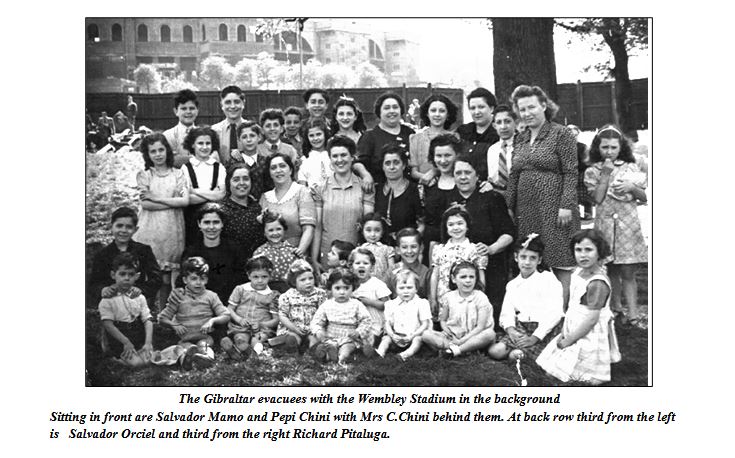 A cup competition between the different centres was held to select the teams to play either in the senior or junior league.

By October 1941, football amongst the evacuees was already becoming a regular feature in providing leisure, sports and entertainment for the evacuees in London.

By then, both the senior and junior league divisions were in their starting positions in accordance with their standard of play. Some teams were by then being rated as favourites like Ivanhoe in the senior league and Lancaster Gate in the junior with some of the most important matches played at Wormwood Scrubs in Shepherds Bush where there were many pitches. 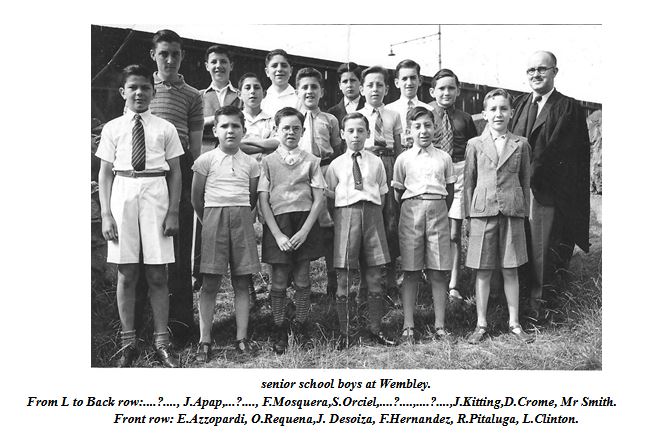 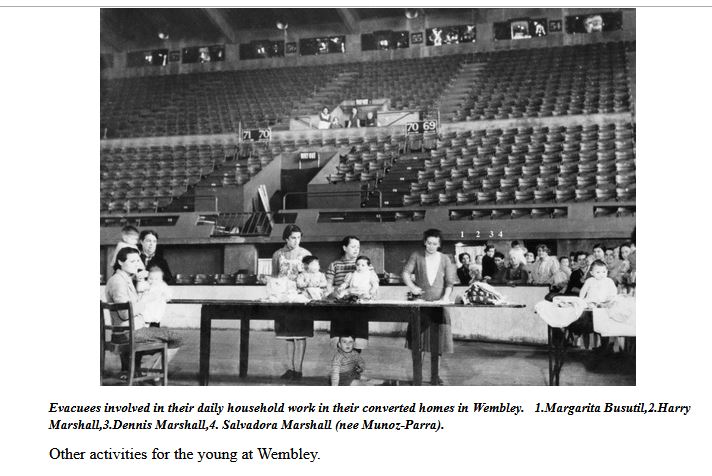 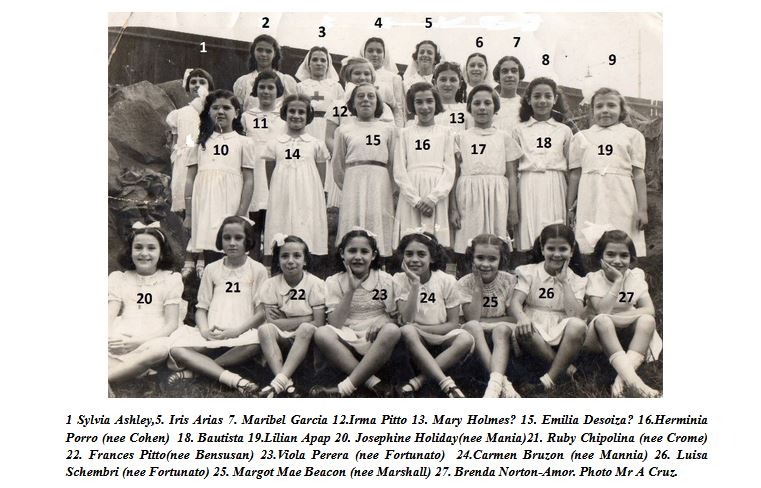 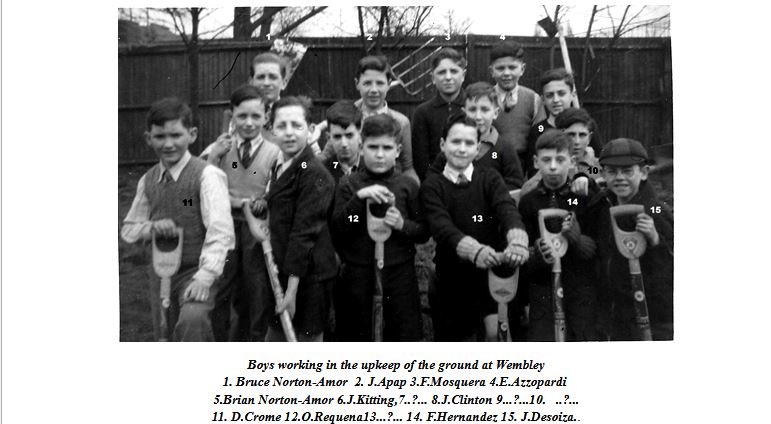 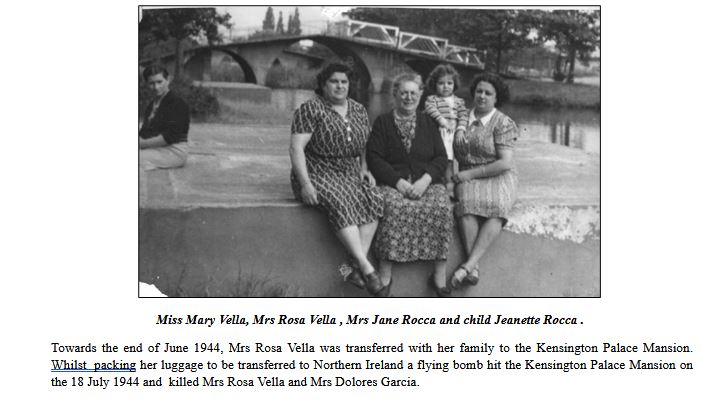 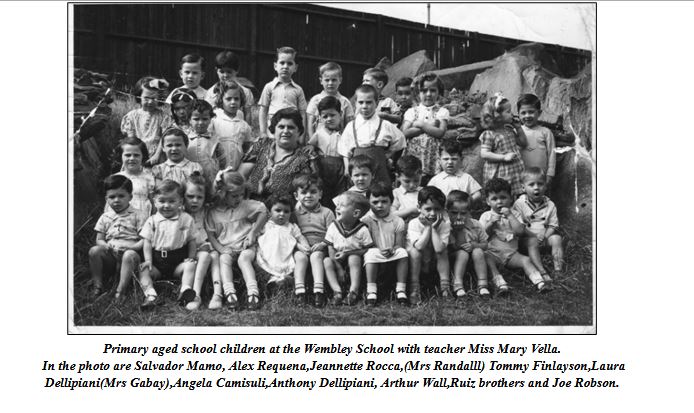 Sitting in front L to R: W. Bado J. Castro M. Rodriguez and I. Duo. Evacuees manufactured their football shirts from pieces of garments and their short from black out curtains. Note on the shirt GE – Gibraltar Evacuees. It seems that only the goal keeper court afford a Wembley Shirt.

In May 1942 the Highlands Heath and Courtlands teams reached the finals in the junior league and Ivanhoe and Dr Barnardo’s teams in the senior league.

Highland Heath won by 4 to 0 and Ivanhoe by 4 to 2 in the Junior and Senior Leagues respectively.

These matches were played on Saturday 9th May 1942 at the Queen’s Park Rangers football ground in Loftus Road, Shepherds Bush. All the proceeds from these matches went to the Spitfire Fund.

One of the last football games was played by the Calpe Football Club and won the minor football league for the 1943-1944 Season at the Tottenham Hotspurs Ground in White Hart Lane on 26 April 1944 against the Southgate Olympic winning by 1 -0.

The very last football match played by the Gibraltar evacuees consisted of a combined team which played on Sunday the 4th June 1944- a few days before Normandy Landing and the onset of the flying bombs. They played against a team called the Free Austria F.C. The games were played at West Acton Playing Fields in aid of the Red Cross and St. John Fund.

In addition to sports other leisure activities were also were organised by the evacuees. One of the most notable early events held at the Wembley evacuation centre was a Gala Dance, which took place in July 1941 to raise money for a memorial fund in aid of the sunken battlecruiser HMS Hood. The dance was attended by many Gibraltar evacuees from different centres.

The Mayor and Mayoress of Wembley and other well-known local personalities were also in attendance at the dance. The Mayoress was presented with bouquet by an evacuee child who also placed the first coin in the box for the HMS Hood Fund.

Just before Christmas 1941, there was a terrible accident at Wembley resulting in the death of four years old boy Basil Norton-Amor, the son of Mr James Norton-Amor clerk of the Justice in Gibraltar.

At the entrance of what was the dining hall for the evacuees there was a sports gong which most of the children used to have fun with the gong by hanging to it and swinging.

Apparently when Basil tried to swing with the sports gong it overturned fracturing Basil’s skull.