In a speech to the House of Commons that was greeted before and after by standing ovations, Mr Zelensky repeated his call for a no-fly zone to be established by the West, begging for the UK to “make sure that our Ukrainian skies are safe”.

The historic address came shortly after Business Secretary Kwasi Kwarteng announced the UK will phase out the import of Russian oil and oil products by the end of the year as part of a ratcheting up of sanctions on Moscow for the attack, which was launched on February 24.

Elsewhere, there has been frustration at the slow progress in processing Ukrainian refugees, with Defence Secretary Ben Wallace offering military support to the Home Office to help deal with the backlog of people trying to get into the UK.

During his address to the Commons, Mr Zelensky – who is said to have to keep his whereabouts a secret due to the threat of assassination in Kyiv – appealed to MPs by quoting from Shakespeare and paraphrasing Churchill.

In a nod to one of the former British prime minister’s most inspiring speeches of the war, Mr Zelensky said: “We will fight until the end, at sea, in the air. We will continue fighting for our land, whatever the cost.”

“We will fight in the forest, in the fields, on the shores, in the streets.” 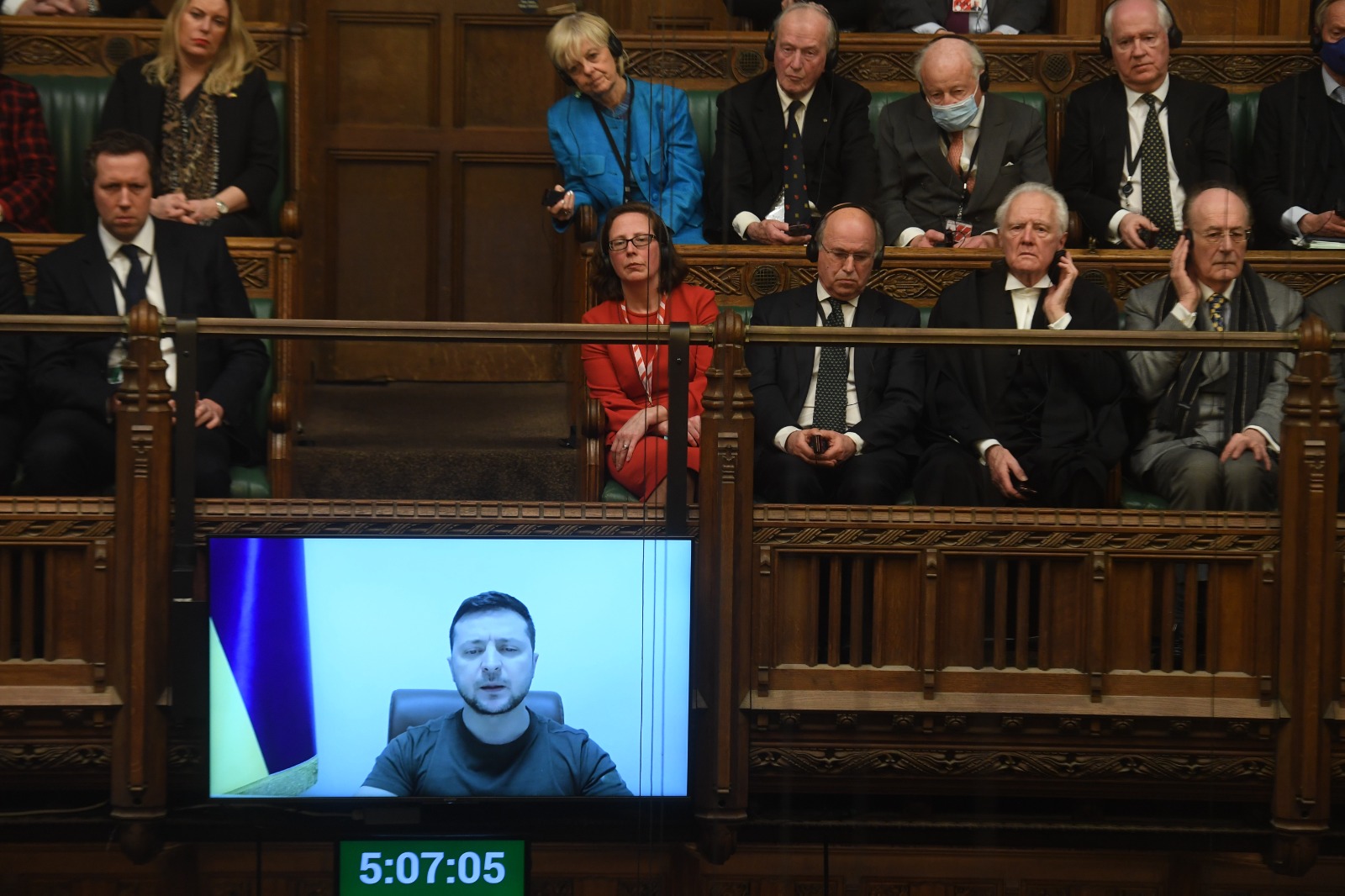 He also pressed home the desire of Ukrainians for their independence to continue, despite their homeland being under attack by Kremlin forces, with a line from Hamlet.

“The question for us now is to be or not to be,” he said, in a translation by Parliament TV.

“Oh no, this Shakespearean question. For 13 days this question could have been asked but now I can give you a definitive answer. It’s definitely yes, to be.”

The embattled president said Ukraine faced a similar dilemma to the one Britain encountered in the Second World War.

He said the current conflict, in which he said 50 children had been killed, was akin to when Britain “didn’t want to lose your country when the Nazis started to fight your country and you had to fight for Britain”.

Prime Minister Boris Johnson, who received a personal thanks from Mr Zelensky for his support, told the Commons after the speech that “never before in all our centuries of our parliamentary democracy has the House listened to such an address”.

“In a great European capital now within range of Russian guns, President Volodymyr Zelensky is standing firm for democracy and for freedom,” Mr Johnson said.

Before the speech, the UK and the US jointly announced they would be banning the import of Russian oil and related products by 2023 as the allies looked to pile further economic pressure on President Vladimir Putin.

Business Secretary Kwasi Kwarteng said the nine-month delay until impact meant the fuel sector and other firms would have “more than enough time to replace Russian imports”.

With 8% of UK oil demand coming from Russia, the Cabinet minister urged businesses to “use this year to ensure a smooth transition so that consumers will not be affected”.

A new taskforce will also be established to help firms find “alternative supplies” before the ban comes into force, Mr Kwarteng pledged.

No UK petrol demand comes from Russia, nor heating or fuel oil, according to the Digest of UK Energy Statistics (Dukes) 2020.

However, 18% of total demand for diesel and 5% of jet fuel comes from Russia.

Officials said the ban, with the import of Russian oil making up almost half of Russian exports and 17% of federal government revenue through taxation, would “choke off a valuable source of income” for the Kremlin.

Speaking in Washington, President Joe Biden said the US joining in with the phased oil prohibition would be a “powerful blow” to the war being raged by Mr Putin on Kyiv.

But he warned Americans that the sanction would have ripple effects at home, telling them that “defending freedom is going to cost” after Brent crude rose 7% to 131.95 dollars per barrel on Tuesday after media reports surfaced about the ban.

A year ago, Brent was trading at around 61 dollars per barrel.

The Prime Minister suggested that diesel prices could be set to rise further in Britain after the announcement, with prices at the forecourts already having soared following Moscow’s attack on Kyiv, but predicted the decision “won’t affect” domestic businesses.

Mr Johnson said the UK was “less exposed” than some European nations when it came to restricting Russian oil, with the European Union importing more than a quarter of its oil from Moscow.