Salvors working on the wreck of the OS 35 removed 80 tonnes of heavy fuel oil from storage tanks at the rear of the vessel on Friday, hours after emptying the ship of the diesel it was carrying on board.

The ship was carrying 215 tonnes of heavy fuel oil, 250 tonnes of diesel fuel and 27 tonnes of lubricant oil when it was beached 700m off Catalan Bay on Tuesday morning to prevent it sinking after its hull was damaged in a collision.

The ship’s hull has since “crumpled” and the salvage operation has focused on removing polluting oils from on board.

Some of the oil was released into the sea on Thursday after two vents that had been capped popped when the hull cracked, resulting in a surface slick that drifted south and was pushed by southwest winds around Europa Point and into the Bay of Gibraltar. 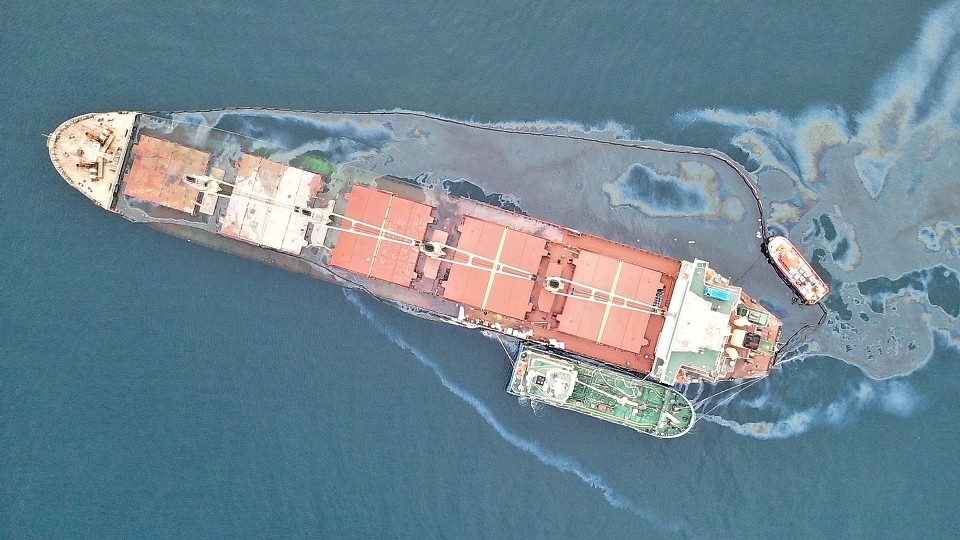 On Friday, as clean-up operations continued at sea, some of the oil washed up on shore here and in La Linea, although officials on both sides of the border described it as minor despite dramatic images of large patches of sheen in the bay.

The first focus for salvors working on the wreck was removing the diesel, an operation that began on Thursday and was completed by midday Friday. Only five tonnes of diesel remain on board, to be used to power the vessel’s machinery.

The salvors then moved on to empty the aft heavy fuel tanks, managing to remove 80 tonnes by evening with another 16 tonnes left in that tank. They expected to empty that tank during the course of the night.

The second phase of that operation will focus on the foreword tank but will prove more complicated as this is located at the bow of the vessel under a cargo hold and submerged under water.

Salvors had hoped to pump that fuel to the aft tank but this proved impossible so they will have to tap into the foreword tank to remove, a complicated operation that will involve divers and will take some time.

Ahead of that, the Gibraltar Port Authority will deploy a new boom around the ship in diamond formation in order to better contain any oil that may seep as a result.

“The process of placing this boom is highly complex, involving numerous assets, and may take 12 hours or more,” the Gibraltar Government said in a statement. 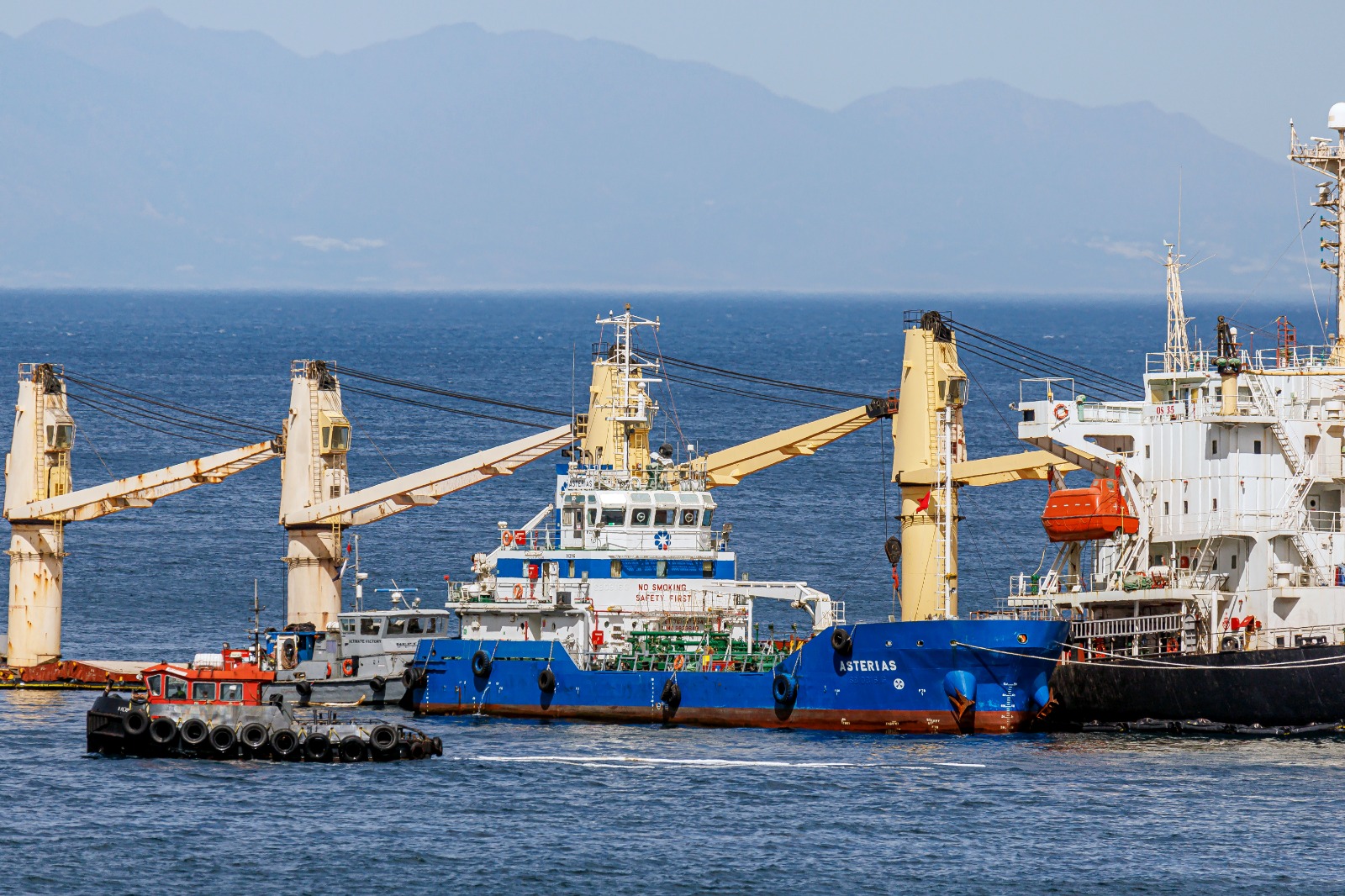 On Friday afternoon a truck arrived from the Netherlands carrying additional specialist equipment for Resolve Marine, the company handling the salvage operation in coordination with the vessel’s P&I insurance firm, QBE Europe SA/NV, and the GPA.

Each stage must planned and method statement prepared and approved.

The salvage team is working carefully but rapidly, conscious that while the weather has been favourable to date, the area is exposed should it worsen in the coming days.

The hope is complete the operation while conditions are good before deciding what to do with the wreck.

While the salvage operation is under way on site, a separate team is considering longer-term option to deal with the wreck.

That could include trying to refloat it to tow into a sheltered area, perhaps the port, or dealing with it on site.

Estimates as to how long that might take range from anywhere between six to 20 weeks, an operation that will be further complicated by the fact the OS 35 is fully loaded with a cargo of steel rebars. 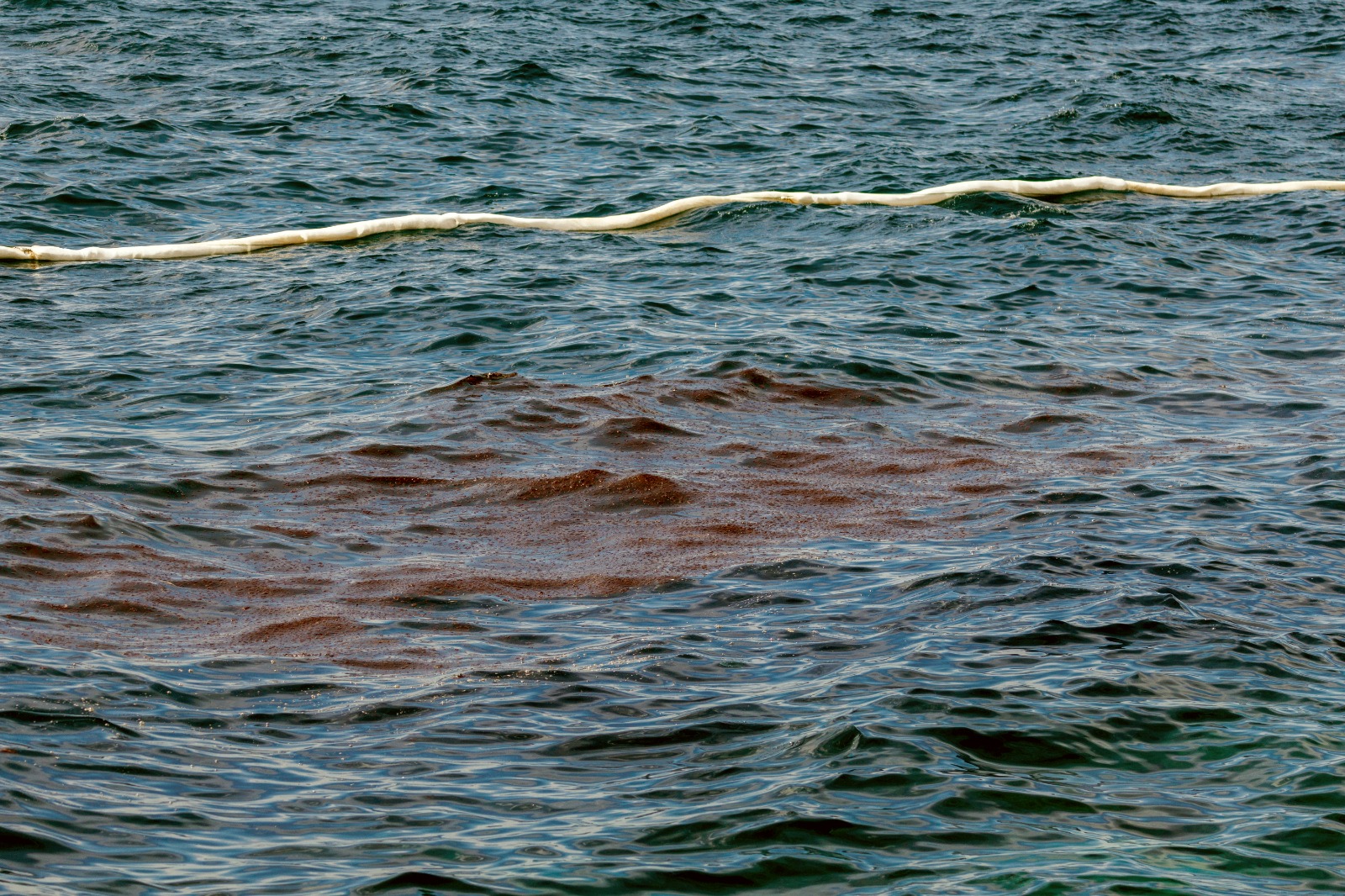 Chief Minister Fabian Picardo, who along with the Governor, Vice Admiral Sir David Steel and other member of the Gibraltar Contingency Council is being briefed regularly, said nothing had been ruled out at this stage.

“All options for removal are being considered,” he told the Chronicle. 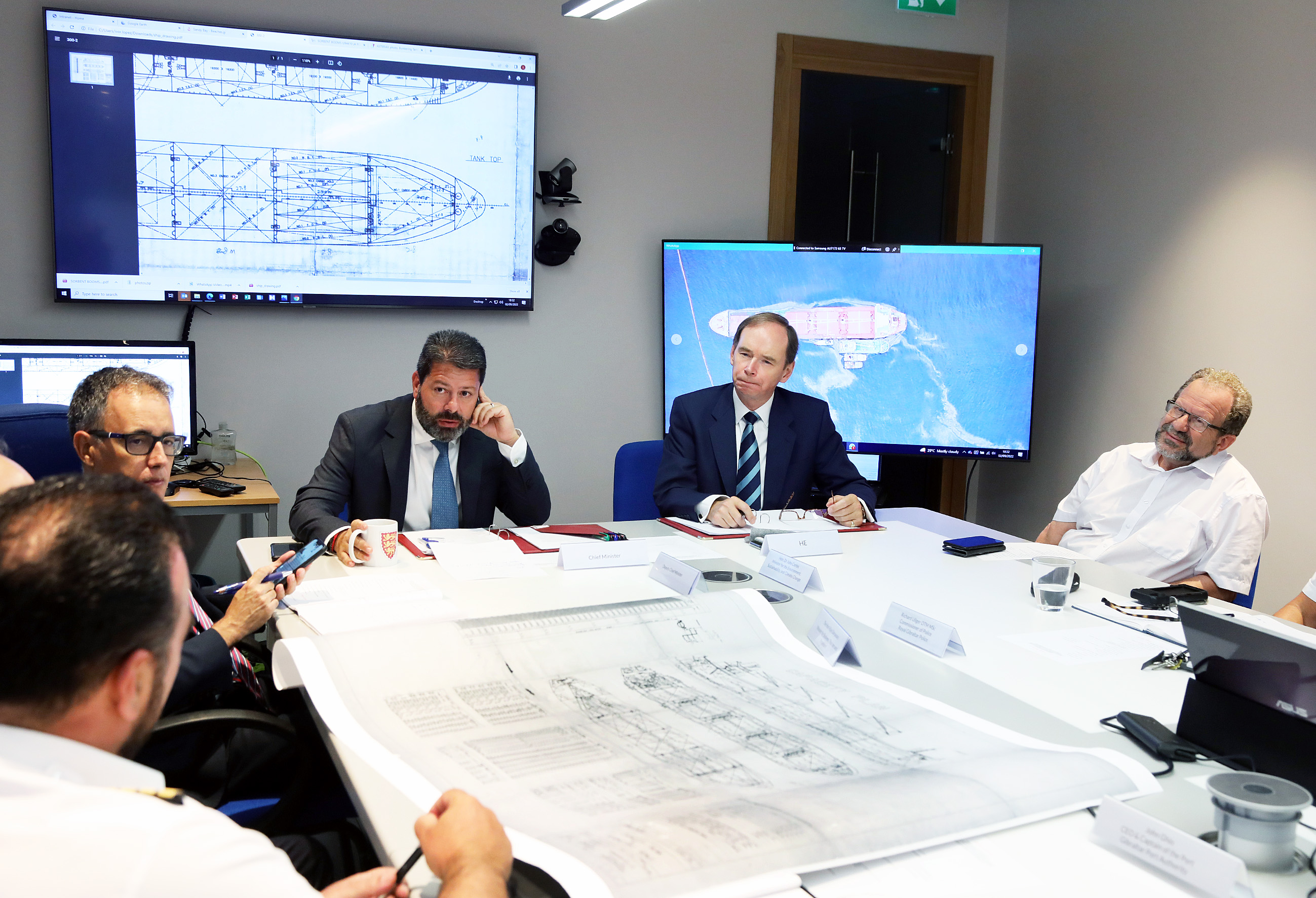 At present though, the condition of the wreck is stable and there are no immediate concerns that it could break up.

Once the tanks are empty, salvors will also assess whether they need to be flushed to clean them of any residue and further minimise the risk of pollution once the removal operation commences in the coming weeks.

Spanish maritime assets remain on scene and the cooperation with Spain is constant, including in-person briefings for Spanish government salvage specialists from the Port of Algeciras. 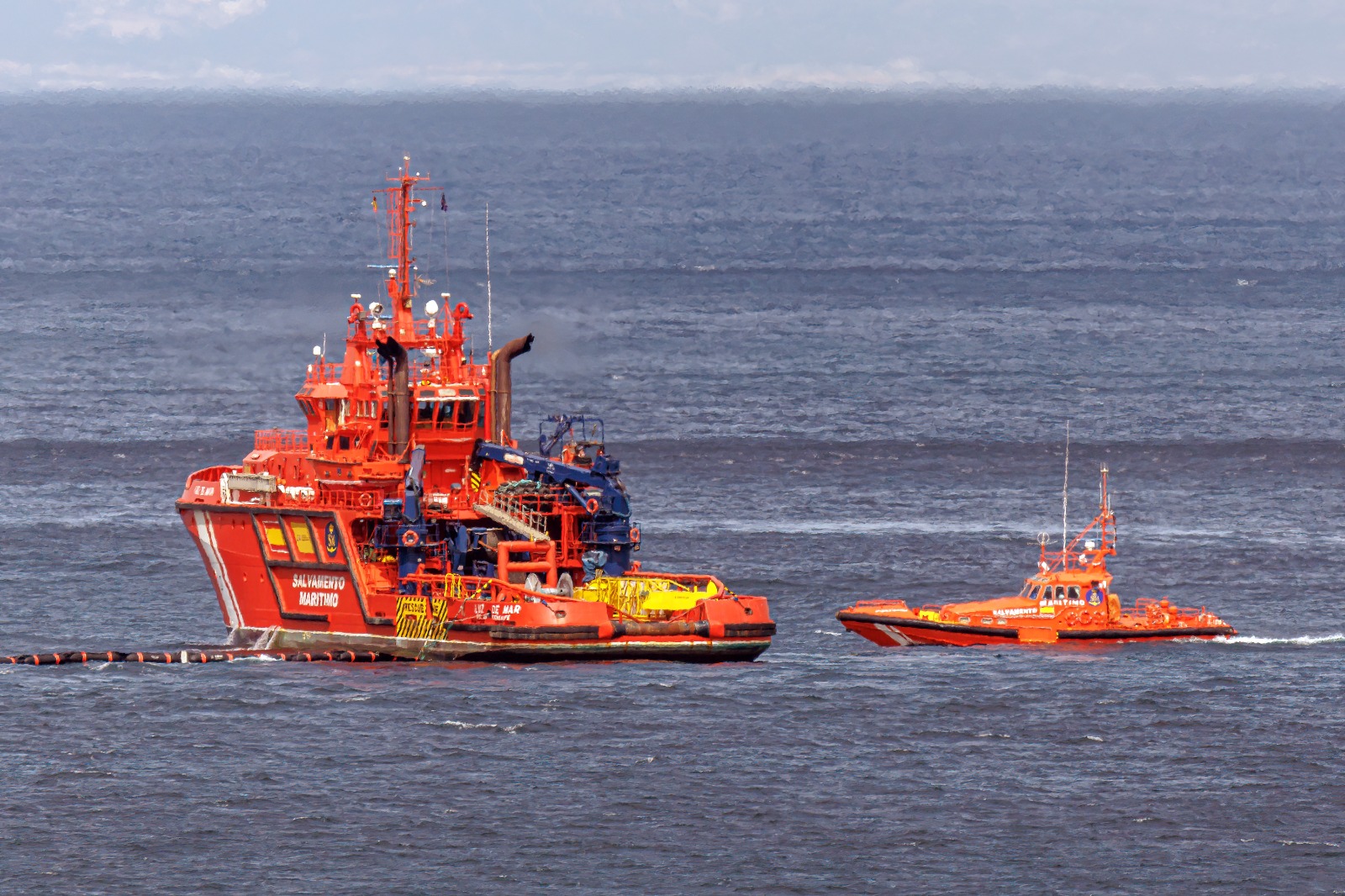 In the air, Spanish helicopters provided surveillance and intelligence of the moving spills in coordination with the Gibraltar authorities.

Despite criticism from some right wing politicians in Spain, the mayors of Los Barrios and La Linea have acknowledged the close contact with Gibraltar, as have Spanish Government ministers.

Isabel Rodrigues, the Spanish minister who is also spokeswoman for the Spanish Government, said Madrid had offered all support to the Campo and “to the authorities in Gibraltar” to tackle what she described as an ecological drama”.

Juan Manuel Moreno Bonilla, the Partido Popular president of the Junta de Andalucia, said his administration was prepared for any eventuality and remained “at the disposal of the state as well as the Gibraltarian authorities for anything that they request from us”.

On Friday, Camp Bay and Little Bay were closed to bathers and all fishing activity in the Bay of Gibraltar was suspended by the Gibraltar Government as a precautionary measure.

In another development, the Royal Gibraltar Police confirmed that a man arrested on Thursday in connection with the OS 35 incident had been released on bail while investigations continued.