‘A Pictorial History of Gibraltar’ featured in Literature Week

Dr Sam Benady and Sarah Devincenzi spoke to Conchita Triay about their book ‘A Pictorial History of Gibraltar’ during Literature Week organised by Gibraltar Cultural Services.

Ms Triay gives an introduction to the two stating that Mr Benady calls himself a veracious reader who developed an interest in writing very early on in life when he was still in school.

Since then he became both a paediatrician and author of seven books he co-authored with the late Mary Chiappe, he has written non-fiction books on the history of epidemics and the history of St Bernard’s Hospital.

Ms Devincenzi is described as coming from a very different background who had a career in arts, crafts and design including jewellery and painting murals. In addition, she managed a company of signsmiths. 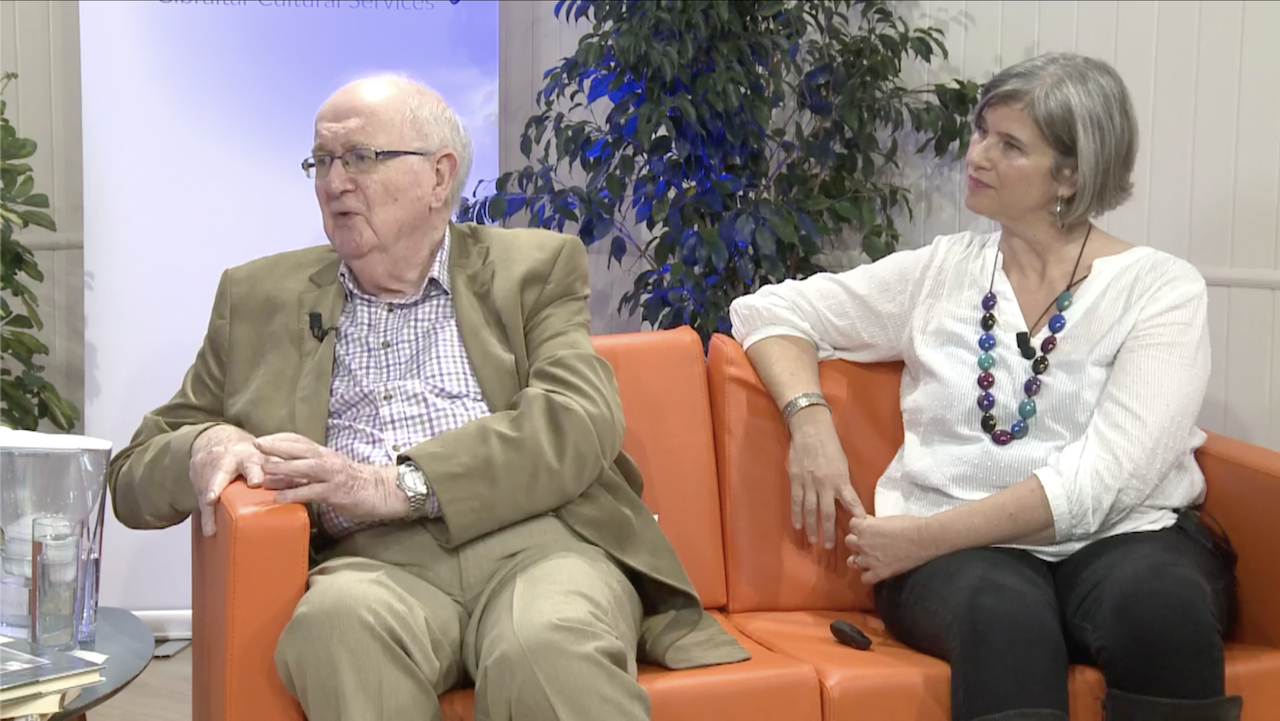 The creativety and imagination of these two minds came together and wrote the book ‘A Pictorial History of Gibraltar’.

“I have been thinking about it for a long time, for years in fact,” said Dr Benady.

“But, I could write the story but I could not draw the pictures.”

“As Sarah could witness as I showed her some of the sketches,” he laughed.

“I didn’t know who I could ask to do the pictures so I put them [the story] away for years until one day I said to my daughter I would really like to get this going and she said ‘why don’t you ask Sarah?’”

That was the start of the collaboration.

The project would not have been entirely unusual for Ms Devincezi as she has some of Gibraltar’s history through art previously.

“For two or three years I did an art class at the Gibraltar Heritage Trust with Elizabeth Farrell and we taught Gib history through the medium of art to young children between six and ten and it was really successful,” she said.

“It was something I found interesting.”

Ms Triay told the authors that when she heard of their book she envisaged a large tomb and was pleasantly surprised to see it was a colourful slim book that reminded her of the Horrible History stories her children used to read.

“Our aim was not to frighten as a lot of people will shy away from history books and we wanted a history book that would be user friendly,” said Dr Benady.

“And, for adults as well not only children.”

Ms Triay agreed on the not only for children comment and stated she was one of the people who had shied away from Gibraltar history.

Mainly because it was not taught in school and when she was older she felt that the history of Gibraltar was always clouded in this mist of canon fire and sieges.

“Things frankly I found quite daunting and didn’t appeal to me and I think you wanted to cut through this fear of local history,” she said.

Dr Benady explained that often people who write history books are military people and they like writing about military history and canons but there is more Gibraltar’s history than the sieges. “There was people living here,” he said.

“You have to talk about the sieges because they were there but you also have to the people who were there suffering the sieges and the way that the Gibraltar community developed.”

The duo are particularly interested in appealing to children and to give them a history that they can identify with.

“The only way you can make people interested in Gibraltar’s history is to catch them young,” said Dr Benady.

Ms Triay stated that the fact that it is colourfully illustrated will attract young readers and she asked if Ms Devincenzi was inspired by any other books like this.

She recalled that her children liked to read books like Asterisk and TinTin and that she was a fan of graphic novels.

“Because I am an artist I am always attracted to visual things and they were definitely an inspiration and also Horrible Histories because I know my children and a big generation of kids are growing up seeing history as fun.”

“And, I think for this book as well, as something you are part of,” she said.

“If you are a kid in Gibraltar this is your history, this is where we all came from. This is how our community became what it was.”

“When you are illustrating something you have to imagine you are there so I would be walking around Gib looking at the Moorish Castle and seeing things in a completely different way and I hope when a child reads our book and really see what they are looking at and what we are talking about.”

Ms Triay also pointed out it could be a starting point for adults who might move on to something deeper and more detailed.