Action 4 Schools has been sponsoring hernia operations in Sierra Leone, enabling a nine year old girl to receive an operation on her umbilical hernia.

Aminata, not her real name, is one of many children suffering from an umbilical hernia in the country where the condition is very common due to low birth weight and premature births. At present there are seven others in need of the procedure, some of which are orphans.

“We sponsored our first ever umbilical operation for a child in January 2022 and the operation was carried out at Masanga Hospital, it was a success,” said Jimmy Bruzon from Action 4 Schools.

“Umbilical hernia operations are relatively simple procedures which have a huge impact on patients’ lives.”

“Children’s hernias go untreated due to lack of family income and they worsen with time becoming unsightly, uncomfortable and dangerous to the child’s health with part of the intestine protrudes through the wall of the cavity around the umbilicus,” he added.

The operation came about when speaking to a friend who is a missionary in Freetown, Sierra Leone, who asked him for help to send money to fund a day out at the beach for a group of children. After the day out Mr Bruzon was sent a photo and when he looked at it he noticed there was something about one of the children. Asking his friend he was told that the child had a hernia.

“I said how about we get it treated,” Mr Bruzon told his friend upon hearing it is not an expensive operation.

Finding out the cost of the procedure and the secondary expenses attached such as transport he realised the charity could fund the operation for other children. 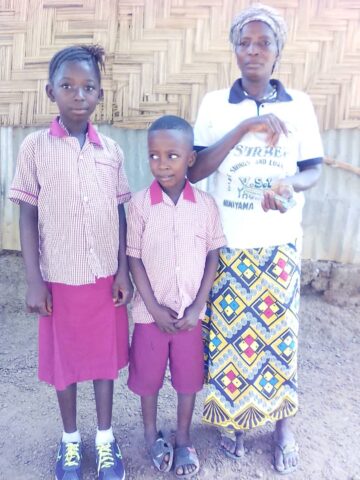 He asked Philip a man who helps him with his projects in Sierra Leone if he knew of any other children only to be told that his niece who lives with him has a hernia.

Mr Bruzon was saddened that he had not been made aware of this sooner and told Philip he would pay for the operation. This child is Aminata.

Mr Bruzon is making a plea for people to set up a monthly standing order so that the charity can fund more life changing and lifesaving operations.

“People are too poor to pay for such operations and children often have to suffer the consequences of these uncomfortable and potentially dangerous hernias, operating and removing an hernia is life changing,,,, leaving them as they are is life threatening,” he said.

According to Mr Bruzon there are two girls aged 15 and 14 and three boys aged 12, 11 and seven in Regent that need urgent umbilical hernia operations.

“Parents cannot fund them and some of the children involved are orphans,” he said.

Aside from these children there are two men, Junisia who is 42 and Joseph who is 39 who need male adult advanced inguinal hernia operations. These are more expensive at £150 but still as life changing and lifesaving.

Mr Bruzon is asking people to make a difference, “you can”, he states.

“Please don’t wait for others to do it, “action turns hope into reality”. 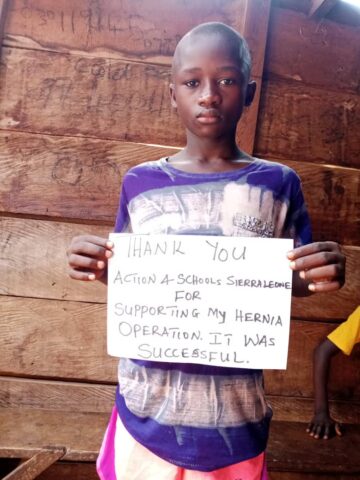 As a means of saying thanks to the Masanga Hospital for their care of Regent Action 4 Schools aims to provide them with a new water well in the coming months.

To donate or set up a direct debit or standing order these are the necessary payment details:
Action4schools-Sierra Leone
NatWest Bank, GIBRALTAR
Account 48084352 – Sort Code 60-60-60