After a busy Saturday outside, Govt urges common sense as it eases Covid-19 regulations

By Cristina Cavilla and Priya Gulraj

The Gibraltar Government signalled on Saturday that it would not hesitate to reconsider plans to ease lockdown restrictions if people failed to respect social distancing rules and limit their excursions solely to those allowed under the Covid-19 regulations.

That was the message from the Minister for Health Paul Balban on Saturday, as he called for people to use “common sense” and only go out to purchase essential items.

This comes as a high ranking police officer expressed disappointment at the number of people out and about in Main Street on the first day a relief measure allowing shops to reopen came into effect.

Taking to social media and tweeting an image of a busy Main Street, the Assistant Commissioner of Police, Richard Ullger, said: “Gibraltar this was not meant to happen today.”

He added: “This is not helping our Royal Gibraltar Police officers at all and is certainly not going to save lives. We are not out of the woods yet so please stay home and save lives and only do the essentials.”

Mr Balban said the Government would need to assess how full Main Street was on Saturday, even as he expressed confidence that the increased activity witnessed on day one of shops reopening would likely ebb as the days go on.

On Saturday, Main Street was busier than it has been for many weeks and, while most people continued to observe social distancing rules, there was concern that some were not sticking to the guidelines.

In the morning spring sunshine after weeks cooped up, there was a sense of normality on Main Street that jarred with the fact the Covid-19 public health crisis is far from over.

And while most people appeared to adhering to the rules, the Government said it would closely monitor the situation over the coming days to see if its initial exit strategy needs refining. 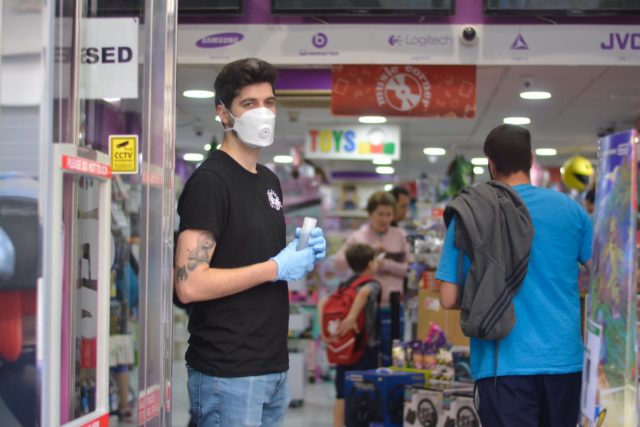 “If people aren’t observing the laws and the rules that we’ve imposed on social distancing etc, then we’ll need to reconsider and see what we do,” he said.

“But this is just the first day and we expect that, come next week, things will be more normal.”

Speaking at the daily press conference Mr Balban said: “The law sets out clearly that we are still in lockdown, we are only allowed to go outdoors to exercise, go to work or shop at certain establishments.”

“We will be slowly returning to a more normal life in terms of what we can do, but for the moment, going to the beach and sitting on a towel is not exercise.”

“Driving to the beach, parking your car and sitting on the sand is not exercise, but driving there if absolutely necessary or preferably walking or cycling there and perhaps taking a swim and then walking, cycling or driving back is exercise.”

“In two weeks’ time we could have a surge but not necessarily so, if we are sensible and take care. This is our aim.” 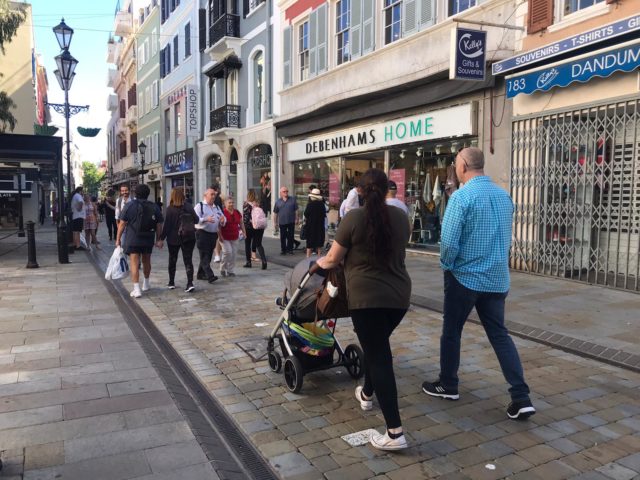 Mr Ullger told the Chronicle that policing the Covid-19 regulations on Saturday morning presented its own set of challenges.

Police officers tasked with policing the town area approached groups of people advising them not to congregate outside shops or to maintain the two-metre distance between each other as advised by the Government.

Mr Ullger said that while the shops were open for essential items, it was “not an excuse for people walking up and down Main Street”.

On Saturday morning, barber shops were a particular concern for the Royal Gibraltar Police as there were queues of people outside while awaiting their turn.

Under the new regulations, people can only go there on an appointment-only basis.

“When we have very large crowds it becomes very difficult for us to manage.”

Policing resources have had to be redeployed in order to ensure the lockdown regulations are adhered to while other crime continues to happen and needs to be investigated and policed, thus stretching resources, he said.

After access to Gibraltar’s Eastern Beach was temporarily restricted on Friday, further controls were in place at all beaches on Saturday to avoid overcrowding.

Access to beaches and the Upper Rock was restricted, with the Royal Gibraltar Police, Customs officers and Gibraltar Defence Police officers on hand to enforce the Government’s measures.

Feetham’s message to Govt on public finances: ‘We told you so’

Govt has lost financial control of a GHA ‘in crisis’, Phillips says

GHA to change board structure to more ‘strategic role’