When an artist found herself isolated at home during the pandemic, she spent the time dressing up her dog to recreate famous artwork, gaining thousands of fans in the process.

Eliza Reinhardt, 25 from Texas, and three-year-old Finn took part in the Getty Museum Challenge in May, which invited art lovers to re-create a work of art using objects they found at home.

However, the pair found they enjoyed it so much, they have done it every weekday since – recreating many famous pieces and gaining legions of fans for their work. 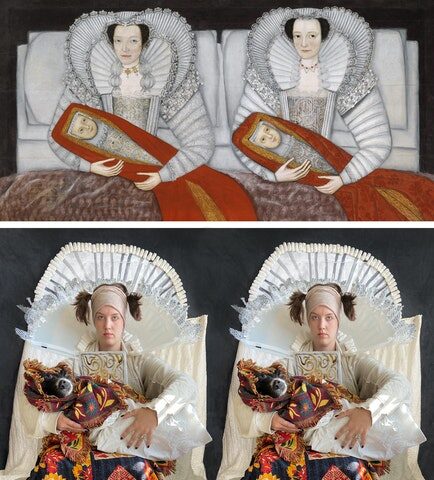 Among the works Ms Reinhardt and her dog tackled was Hieronymus Bosch’s The Garden of Earthly Delights, in which the artist’s hellscape was recreated with the help of a range of toys and some carboard costumes.

Another was Henry Fuseli’s 1781 work The Nightmare. In her version, Ms Reinhardt lies across a bed while being overlooked by a demonic incubus – in this case played by a rather more placid-looking Finn.

In a show of his versatility, Finn also wears an elaborate and aptly-named ruff with a bonnet in a reworking of Michael Conrad Hirt’s 1642 piece Portrait of Anna Rosina Marquart.

The duo now also sell postcards and calendars of their work.

Ms Reinhardt became a “full-time dog mother” to three-year-old Finn after she lost her job in March.

She had been working at a museum and interning at a gallery, but with both forced to close she wanted to find a way to channel her creativity.

She told the PA news agency: “Finn is quite the wild energetic boy, and we lived in a loft – it was not ideal for him.

“It’s hilarious to see how serious he takes it,” she said.

“He will sit on top of little tiny stools, and he has a big butt and he’s kind of a funny shape and he will just wedge himself up there and wait patiently. He let me put a moustache on top of his nose. He does absolutely anything.”

Finn takes artistic direction, and during one particularly difficult pose, she said she printed out the art to show him what he needed to do.

“I vividly remember he wasn’t doing it right so I printed out the picture and showed it to him and I was like, Finn you need to look like this,” she said.

“And I took the picture, and he did it. And I was like, there’s no way that registered with you, but it must have.”

Recreating the poses takes several hours a day, with one – Bosch’s hell – planned the night before, and requiring 12 hours of work to finish.

The pair have built up a community around their work, which Ms Reinhardt said has helped her deal with being in isolation for so long, as she is deemed high risk.

She said: “Finn demands to do it every day. I don’t think I can stop ever because he is upset. I have my studio upstairs and he will sit in the place where we usually take it and he’ll just stare.”

Despite coming from a family of artists, Ms Reinhardt discovered her creative outlet after she hit her head on a door handle when she was 18 and suffered significant memory loss.

“I tried everything in college to try and find something I liked, and I finally found art when I was a junior,” she said.

After self-publishing a volume of their earlier work, she is now hoping a publishing house will take on a second volume.

“I can’t imagine not doing this with him, although I know it will have to end eventually,” she said.

“It is just seeing how far we can push it before it gets old.”

The Arborealists visit Gibraltar for ‘Being With Trees’ exhibition