As Royals land in Gibraltar, a message from the Queen

by Eyleen Gomez and Gabriella Peralta

Queen Elizabeth II yesterday reaffirmed the close ties between Gibraltar and the Crown, in a message to Gibraltar issued issues as her youngest son, Prince Edward, and his wife Sophie, the Earl and Countess of Wessex, landed on the Rock at the start of a three-day Royal visit.

After technical issues delayed their flight by some five hours, Prince Edward and Sophie finally arrived in Gibraltar and were greeted warmly by crowds outside The Convent.

The Queen had kind words for Gibraltar upon their arrival, having visited the Rock herself in 1954 during her Commonwealth Tour.

“Over the years I have watched Gibraltar prosper as a multi-cultural and multi-faith community, proud of its rich history while dynamic and forward looking,” Queen Elizabeth II said in a statement.

“In my Platinum Jubilee year, I am delighted that my son and daughter-in-law have the opportunity to visit Gibraltar again, and I am pleased that they will represent me at my Birthday Parade in Casemates Square, taking the salute of the Royal Gibraltar Regiment to whom Prince Edward presented new colours at Windsor earlier this year.”

“I am grateful for your continued allegiance and loyalty, and I am pleased to reaffirm the close ties that have existed for so long between the Crown and the people of Gibraltar.”

“My thoughts and prayers will remain with you for your future happiness and prosperity.” 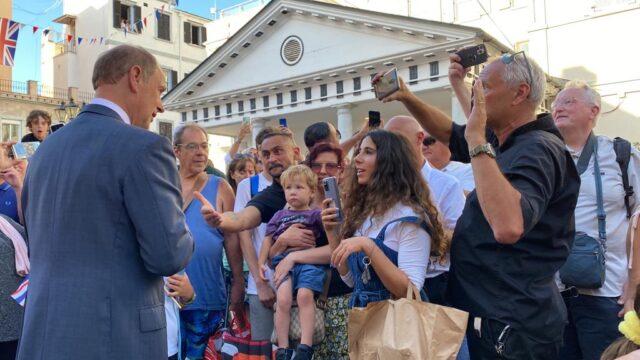 On a balmy early-summer Mediterranean evening, members of the public waited to catch a glimpse of Prince Edward and Sophie as they arrived at The Convent at 8pm on Tuesday.

The Royal visit got off to a bumpy start.

The couple were on British Airways flight that should have landed early in the afternoon but had to turn back to London shortly after take-off due to a technical problem.

That delay disrupted plans for the afternoon, including a walk on Main Street and a visit to an exhibition at the City Hall, both of which were cancelled on Tuesday.

But nothing was going to stop many Gibraltarians from greeting the couple on arrival. 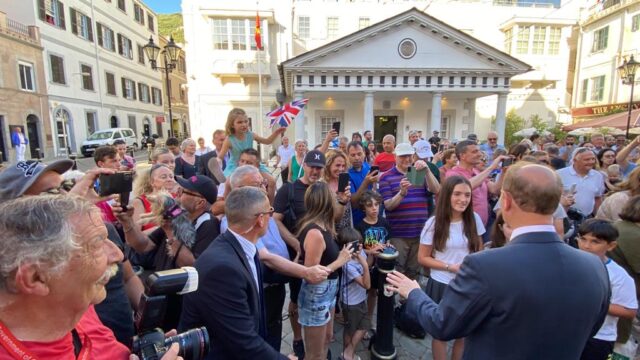 Chants of ‘God Save the Queen’ could be heard and the couple stopped to talk to the public and shake a few hands.

The Earl jokingly asked if the crowds were waiting for him or whether it was a chance encounter, telling them the flight they were on managed to make it here the second time round.

For Kelly Trico and her family, this was not the first time meeting the Earl and Countess, having last greeted the couple in 2012 during a walk on Main Street.

Remembering their visit 10 years ago, Ms Trico said Sophie had approached her daughter, Arianne, now aged 10, who was sat in a pram.

Decked out in Union Jack flags, Ms Trico waited for Prince Edward and Sophie with her daughter Arianne.

Also attending was Kaitlyn, aged 6, who was excitedly waiting for the Royal couple, waving her Union Jack flag.

Olivia Morton, 19, is on holiday in Gibraltar visiting her university friend Sophia Aonso. 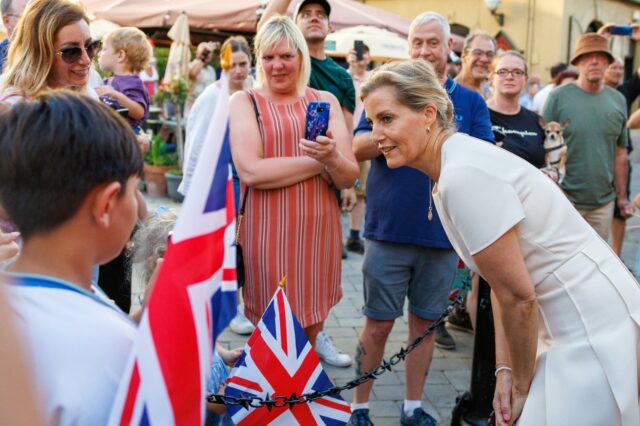 The friends met while studying at Bath Spa University and decided to incorporate the Royal visit into Olivia's sightseeing.

They briefly spoke to Earl and Countess, and even asked for a selfie.

Even before arriving at The Convent, the Royal couple were already embarked on a programme of engagements that officials were last night frantically adjusting to accommodate the delayed arrival.

The Main Street stroll is now scheduled for 11am on Wednesday morning.

Just after 7pm on Tuesday, the couple landed at Gibraltar International Airport and were greeted on the runway by the Governor, Vice Admiral Sir David Steel, and Chief Minister Fabian Picardo. 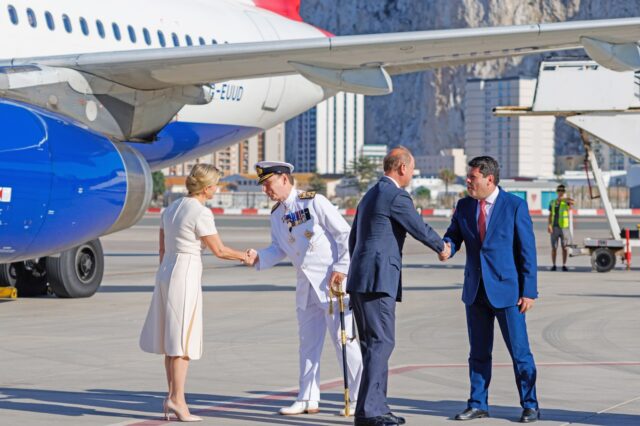 Upon arrival they headed over to the Wessex Lounge, named after the couple following their 2012 visit to the Rock.

Shortly afterwards they were met with a Royal Gun Salute from the Royal Gibraltar Regiment, with soldiers carrying their new colours which was presented to them earlier this year by the Earl.

The Regiment were joined by the Irish Guards.

Molly Peach, the daughter of Lance Corporal Peach, a member of The Band and Corps of Drums of the Royal Gibraltar Regiment presented The Countess of Wessex with a bouquet of flowers as the Countess arrived. 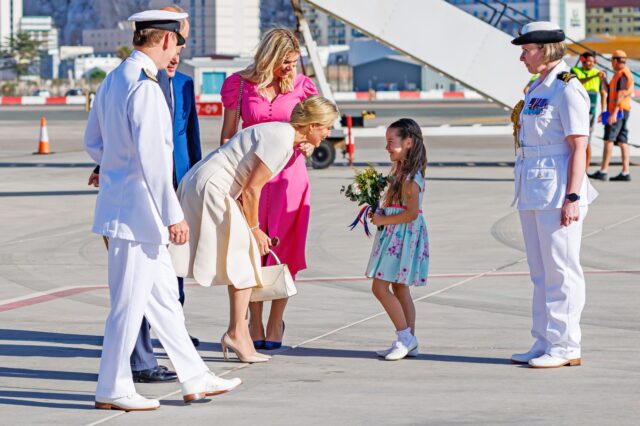 After this they visited the Nautilus Project (TNP) to see the work they do with children and the marine environment.

“The Nautilus Project are humbled with the Royals visit to their Laboratory,” Lewis Stagnetto, marine biologist and co-founder of TNP, said. 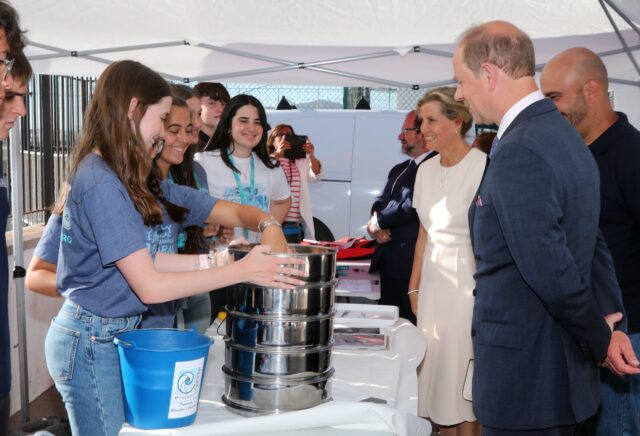 “After weeks of hard work and preparation, the teenage cohort were able to showcase the experience and knowledge they've have acquired as volunteers for the charity.”

“Many of those present are currently sitting their GCSE examinations yet they felt that this special opportunity afforded to them was a once in a lifetime experience.”

This marks the couples second Royal visit to Gibraltar in 10 years, and sees Prince Edward follow in the footsteps of his mother Queen Elizabeth II, who visited Gibraltar in May 1954.

This was the Queen’s first and only visit to Gibraltar, a year after her 1953 coronation when she was on a Commonwealth Tour stretching from Canada, Australia, Sri Lanka, Uganda, Malta and lastly, Gibraltar.

Prince Edward and Sophie’s presence on the Rock is seen as a demonstration of Gibraltar’s close ties to the UK. 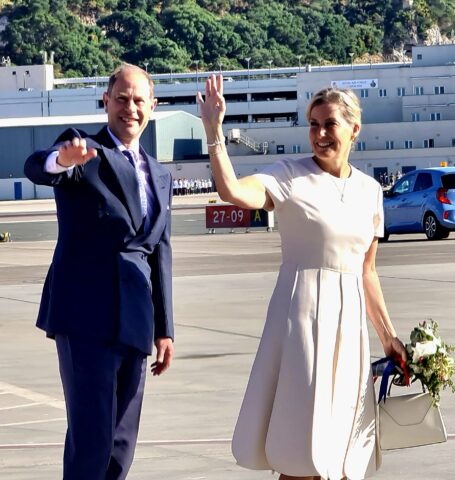 They were last in Gibraltar in 2012 to mark the Diamond Jubilee. Now, a decade later, the Queen’s youngest son is marking her Platinum Jubilee with a visit to Gibraltar.

The visit comes just days after Queen Elizabeth II celebrated 70 years on the throne, with thousands of official events held across the UK.

In Gibraltar her Jubilee has been marked with an exhibition, a food festival, and street party, and now a visit from Prince Edward.

The Royal visit, however, has not been without some controversy.

The visit comes against the backdrop of ongoing talks for a UK/EU treaty on Gibraltar’s future relations with the bloc and has drawn a diplomatic protest from Spain.

Madrid said the timing of the visit was unfortunate, though British officials insist this is a people-focused trip to celebrate the Queen’s Platinum Jubilee.

In any event, despite any Spanish unease, Foreign Minister Jose Manuel Albares said at the weekend that the visit would not prove an obstacle to the treaty talks.