As Wellington and Napoleon turn 250, we deconstruct the rivalry that reshaped a continent

The arch-adversaries hated each other - despite the fact they never actually met.

It's easy to feel sorry for the French army. In 1940, the Maginot Line crumbled against the Nazi advance like a croissant that's spent too long in the sun, and centuries of military dominance were forgotten within days.

Think of the infamous Simpsons episode that coined the phrase "cheese-eating surrender monkeys", or the urban legend that if one searches 'French military victories' in Google, it auto-corrects to 'French military defeats'.

The French actually have one of the best win-loss ratios in history, so could be forgiven for being a bit miffed that even their most celebrated commander is perhaps best-known for his defeat to an English duke. By cutting the head off the Napoleonic snake, Wellington's victory at Waterloo brought an end to 23 years of continuous war in Europe, and dismantled in a stroke the fledgling French empire.

This year marks the 250th anniversary of the birth of both Napoleon and his conqueror, the Duke of Wellington. So, here's what the history books say about the two generals, and, perhaps more importantly, what they said of each other... 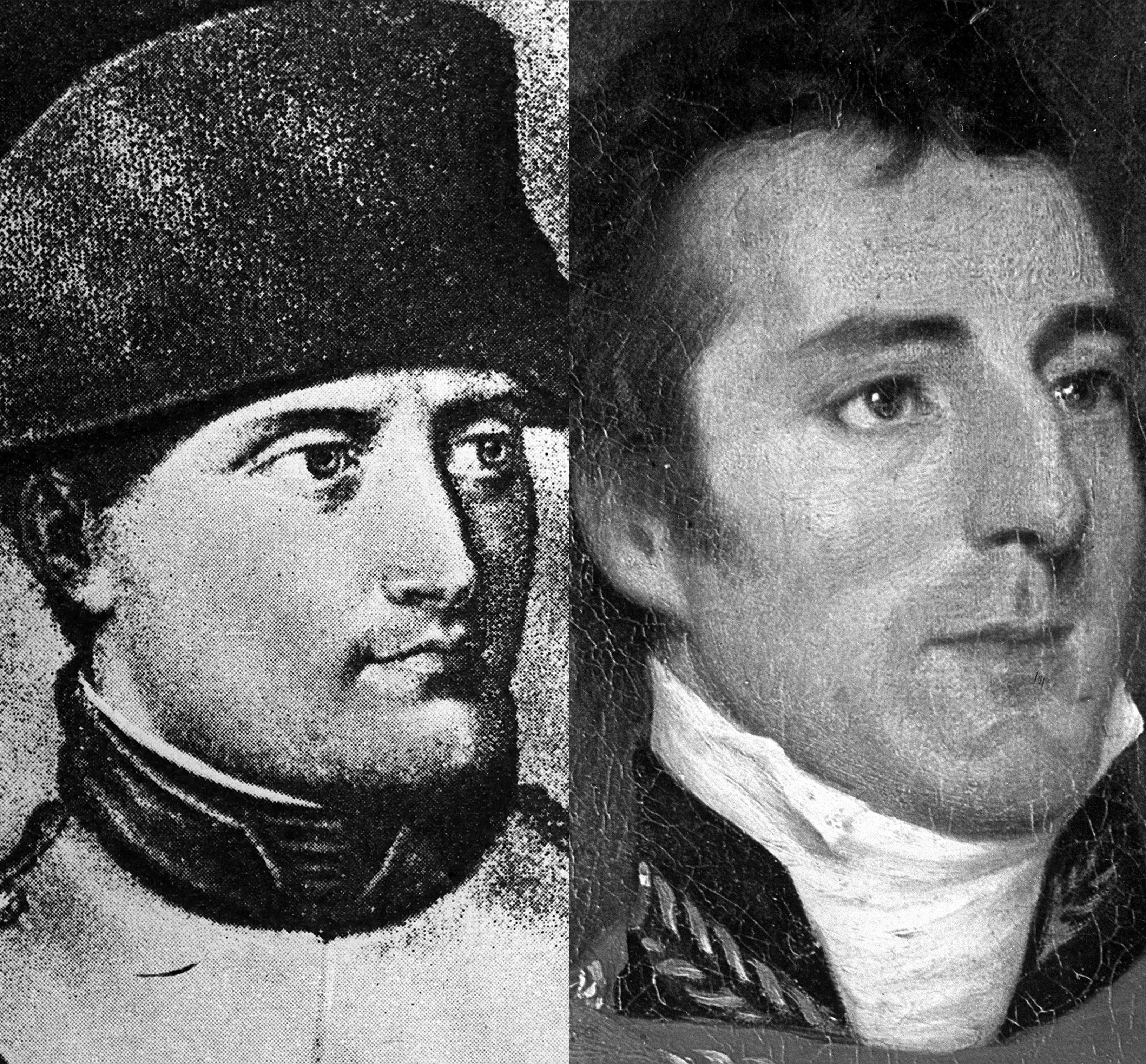 United by battle - and little else

Wellington and Napoleon were the leading commanders of their age and both were born in 1769, but that's roughly where the similarities end. History often portrays the pair as archetypes of their respective nations, and the differences between them.

Napoleon was an architect of chaos, and a product of it - a fiery, unpredictable child of the French revolution, whose grand, romantic visions were centred on an unquenchable thirst for glory and a battering-ram personality. Nearly as controversial now as he was then, you can often guess what an author's view will be of Napoleon simply from the language they're writing in.

Wellington, on the other hand, was a stiff-lipped Etonian, who'd dabbled in parliamentary politics and risen dutifully through the hierarchy of the British army. He abhorred extravagance, preferred manners to passion, lionised the class system, and believed wholly in the honourable pursuit of public service. Much less fun round the dinner table, but the perfect second in a dual.

Both men were ardent nationalists, but employed diametrically different strategies in their service to red, white and blue.

Wellington never addressed his troops en masse, communicated with short, factual, monotone bulletins, and had neither a talent nor a penchant for showmanship. His hatred for pageantry extended to his soldiers ("There's nothing so stupid as a gallant officer") and he treated praise with embarrassment and suspicion.

Napoleon was, to say the least, more outgoing. He would deliver impassioned monologues on courage and glory to his armies before battle, and in his war reports would romanticise to the point of fabrication. His extraordinary personal charisma engendered cult-like loyalty in his followers - loyalty that he rarely returned.

Neither man was overly troubled by self-doubt, but Napoleon's egomania has become the stuff of legend, and some historians have characterised him as a psychopath. Napoleon, they argue, was a despotic warlord, whose naked ambition cost six million lives.

Defenders - and even in English there are some - view him instead as a reformer protecting the values of the revolution. They point to the Napoleonic Code - still the basis for many European laws - and his exceptionally soppy love letters. Even his most ardent adherents admit, however, that his regard for human life was low.

Where Napoleon basked in the bloody fanfare of victory, Wellington was sickened by needless slaughter, and saw war as a means only to its end. A staunch conservative with a big and small 'c', he was no friend to the chattering classes (whom he accused of "idleness, dissipation, and improvidence"), but he refused to risk lives without cause.

Wellington did not possess Napoleon's instinctive genius, so compensated with extraordinary physical fitness, close tactical study, and a Thatcher-like ability to survive on very little sleep.

Inevitably, the two men are now mired in myth. Wellington reputedly said that 'the Battle of Waterloo was won on the playing fields of Eton' - hardly likely, since he a) hated Eton, and b) Eton didn't have playing fields at that time. As for Napoleon, 'Little Boney' was in fact average height.

In their own words

Until the Battle of Waterloo in 1815, Napoleon and Wellington had never battled each other directly, but they most certainly knew of each other. Wellington praised his arch-rival's generalship ("I have seen most other marshals... and Bonaparte was the best of them"), but described his character with unparalleled venom.

"Bonaparte's whole life," he wrote, "civil, political, and military, was a fraud. There was not a transaction, great or small, in which lying and fraud were not introduced." He scorned Napoleon's populist peacocking (he would wax lyrical before his armies about the great deeds of individual soldiers - fed to him by aides off-stage), and was infuriated by his tendency to trumpet victories back in France that had in fact been defeats on the battlefield.

"Bonaparte's foreign policy was force and menace," he went on, "aided by corruption... And in most cases the unfortunate victim did not dare to avow that he perceived the fraud." In these writings, Wellington used the non-French spelling 'Buonaparte', to emphasise the non-French lineage of his Corsican nemesis.

Napoleon, on other hand, took aim less at Wellington-the-man, more at the English commander. "He ought to be heartily grateful to old Blucher [Wellington's Prussian ally]," he wrote from exile on St. Helena. "Had it not been for him, I know not where his Grace might have been today, but I know that I, at least, should not have been on St. Helena.

"Wellington's troops were admirable", he conceded, "but his plans were despicable, or should I rather say, that he formed none at all... He has reaped the fruit of a brilliant victory, but did his genius prepare it for him? His glory is wholly negative. His faults were enormous."

Clearly no love was lost: In his will, Napoleon left 10,000 francs to a former soldier named Cantillon, who had been accused of trying to assassinate Wellington in Paris in 1818.

Napoleon considered Wellington a stuck-up aristocrat, whose glories came with a good deal of help and chance. Wellington thought Napoleon a bully and a yob, whose "great abilities, and the great stakes he played for, threw the knavery into the shade".

Both were exceptionally partisan, but neither was entirely wrong.

Battle of the century

When the day of reckoning came, the battle was closely-fought - and indescribably bloody. All told, around 55,000 men were counted dead, injured or missing, and several acres of field turned red with the blood of the slain. Wellington called the carnage "the nearest-run thing you ever saw".

By this time. Napoleon was facing a coalition of four European powers, and Wellington's army contained entire battalions of German, Dutch and Belgian soldiers. And, after Napoleon made the fatal mistake of delaying his attack, while waiting for the ground to dry, Blucher's Prussians arrived mid-afternoon to decisively sway the tide of battle.

The Prussians wanted Napoleon's head, but Wellington intervened, saving his life if not his dignity. Promptly exiled to St. Helena, he died in 1821, aged 51.

If there's one thing in which Wellington could never match Napoleon, it was stomach for the fight. He broke down in tears on the battlefield while reading the 'butcher's bill' (the list of the dead), and spoke only fleetingly of victory in his dispatches, emphasising instead his desperate losses.

He returned to England and re-entered politics, serving twice as Prime Minister. He never lead an army into battle again.

Gibraltar Academy of Dance to return to the stage