Baby bumblebees develop abnormally when exposed to food contaminated with a certain type of pesticide, scientists have found.

Researchers from the Imperial College London scanned the brains of bees exposed to imidacloprid, an insecticide with a similar chemical composition to nicotine.

They found the key region of the brain that facilitates learning showed reduced growth in the insects exposed to imidacloprid.

The researchers said the findings, published in the journal Proceedings of the Royal Society B, show that residues of this insecticide in flowers and plants can cause permanent brain damage in bees. 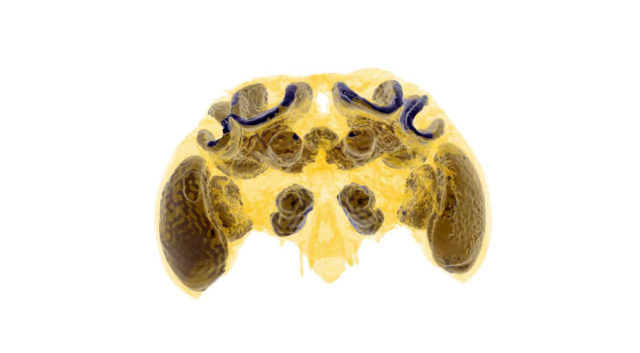 Dr Richard Gill, from the department of life sciences at Imperial and the lead researcher on the study, said: "Bee colonies act as superorganisms, so when any toxins enter the colony, these have the potential to cause problems with the development of the baby bees within it.

"Worryingly in this case, when young bees are fed on pesticide-contaminated food, this caused parts of the brain to grow less, leading to older adult bees possessing smaller and functionally impaired brains; an effect that appeared to be permanent and irreversible.

"These findings reveal how colonies can be impacted by pesticides weeks after exposure, as their young grow into adults that may not be able to forage for food properly."

Use of some insecticides like imidacloprid, which are also known as neonicotinoids, are restricted within the European Union but not around the world.

The team exposed bumblebees to small amounts of imidacloprid during their development as larvae or very young adults.

The learning ability of the larvae was tested after three days and after 12 days once they emerged as adults.

Bees that were fed imidacloprid when they were developing as larvae showed "significantly impaired learning ability" compared to those that were not, the researchers said.

The team then scanned the brains of nearly 100 bees from the different colonies.

They found that baby bees exposed to imidacloprid during larval development had a smaller volume of the brain region associated with learning.

The findings suggest the effects of larval exposure to the insecticide could not be overcome, the researchers said, pointing to a potentially permanent effect.

Lead author Dr Dylan Smith, also from the Imperial's life sciences department, added: "There has been growing evidence that pesticides can build up inside bee colonies.

"Our study reveals the risks to individuals being reared in such an environment, and that a colony's future workforce can be affected weeks after they are first exposed."