Kenneth Jophnson, 82, moments after he disembarked from the cruise ship Columbus, which stopped in Gibraltar to allow him to get home after cancelling a round-the-world voyage. All photos by Eyleen Gomez

A round-the-world voyage on the cruise ship Columbus ended in a sunset adventure in the Bay of Gibraltar for one 81-year old Rock resident, whose dream holiday was cut short by the global Covid-19 pandemic.

Kenneth Johnson, a British Gibraltar resident, sailed from London last January and was enjoying his 120-night voyage on Columbus when coronavirus brought the trip to a halt.

Cruise and Maritime Voyages, the company that operates the ship, said there were no Covid-19 symptoms or health issues with any passengers or crew members on board Columbus, adding all were routinely screened.

But as ports locked down around the globe as a result of the Covid-19 pandemic, the company was forced to cancel itineraries and send its vessels back to their home ports, with Columbus set to arrive back in London on April 14. 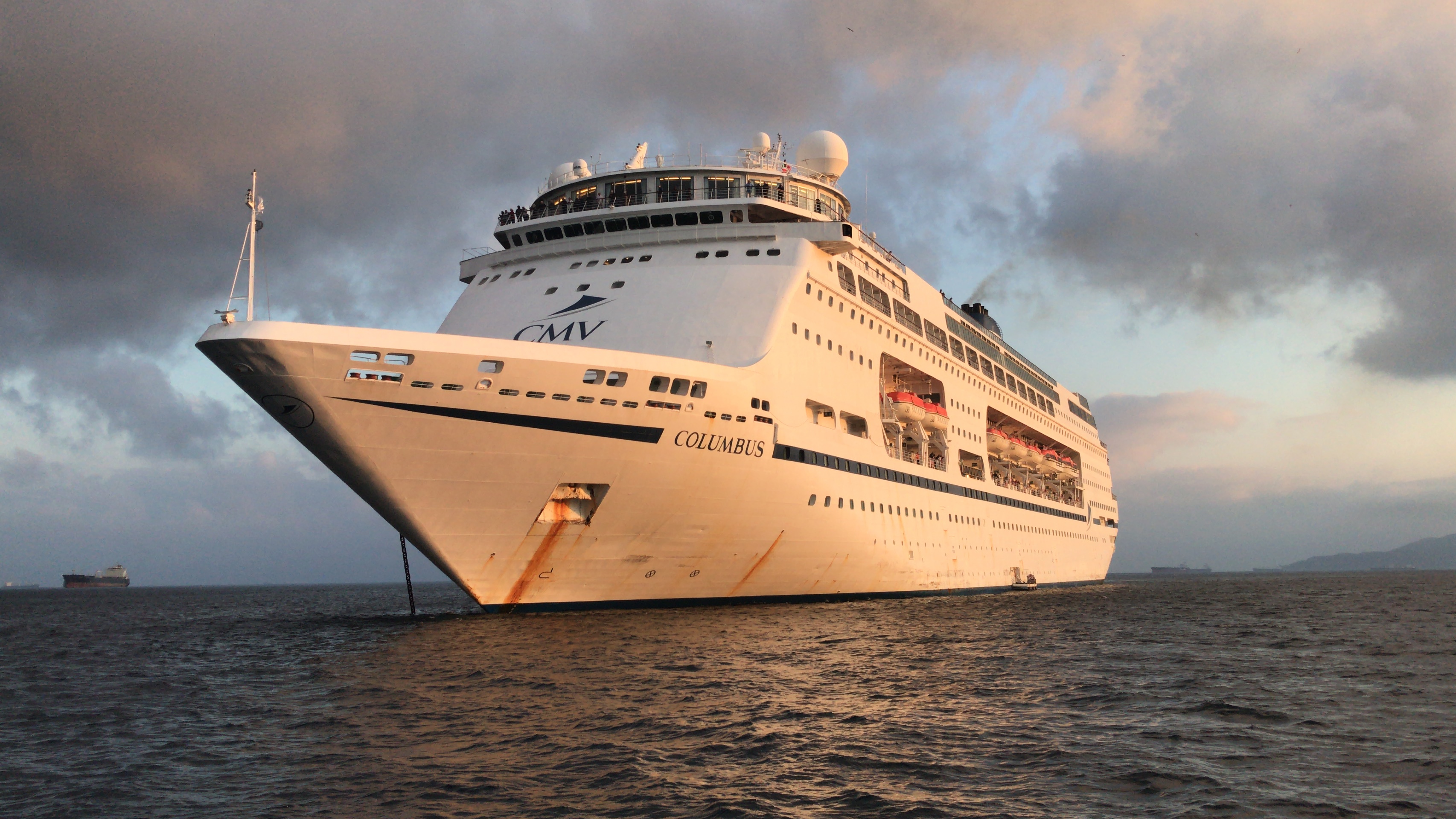 After weeks at sea bound for the UK, a logistical operation began on shore in Gibraltar to get Mr Johnson home as Columbus sailed through the Strait of Gibraltar.

Gibraltar ship agent Incargo Shipping collaborated with the cruise company, the Gibraltar Port Authority, Gibraltar Pilots and public health officials to pull off the task, drafting in Neptune Marine, which operates harbour boats, to make the transfer as safe and as comfortable as possible for the octogenarian.

Columbus entered the bay at sunset on Thursday, just as Gibraltarians applauded the Rock’s frontline workers at 8pm to a chorus of horns from ships anchored in the bay.

As the grey levanter cloud hung over the rock, the sea remained relatively calm despite the wind as Mr Johnson made his way across the gangway from Columbus onto the harbour boat Ultimate Dream. 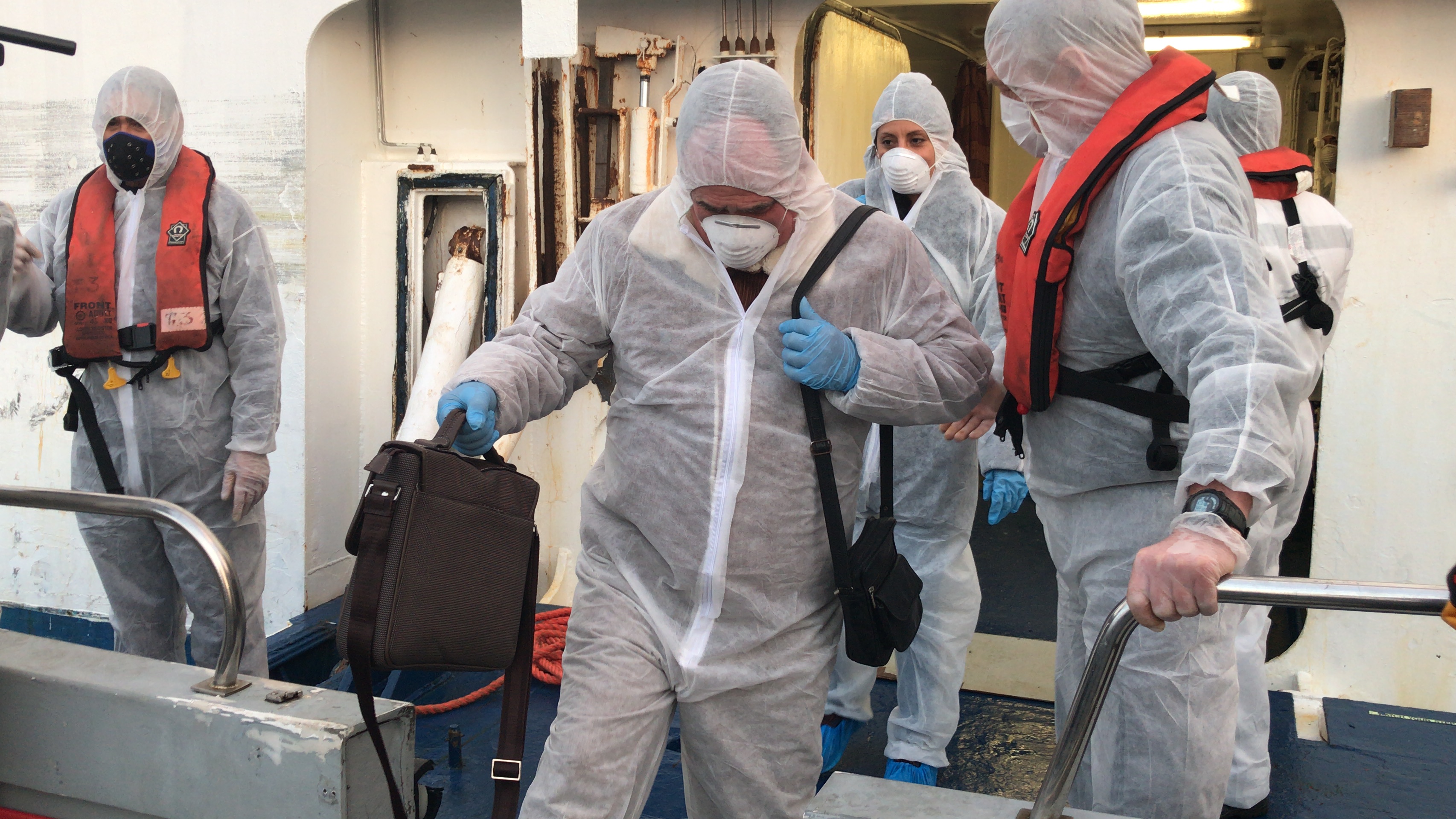 “Wow, what a palaver,” remarked Mr Johnson to the Chronicle once he was ashore.

Mr Johnson had spent the past 14 weeks on board Columbus and judging by the send-off he had made a lot of friends along the way.

“It is the first time I have been cruising on my own and it’s a bit of a swan song,” he said.

“The sad part of it is that it went a little bit wrong.”

“The even sadder part is that whereas a lot of the people could say ‘oh we, will do it next year’ because CMV are doing deals with them, I can’t afford it.”

“But anyway, it has been one hell of an experience” he added. 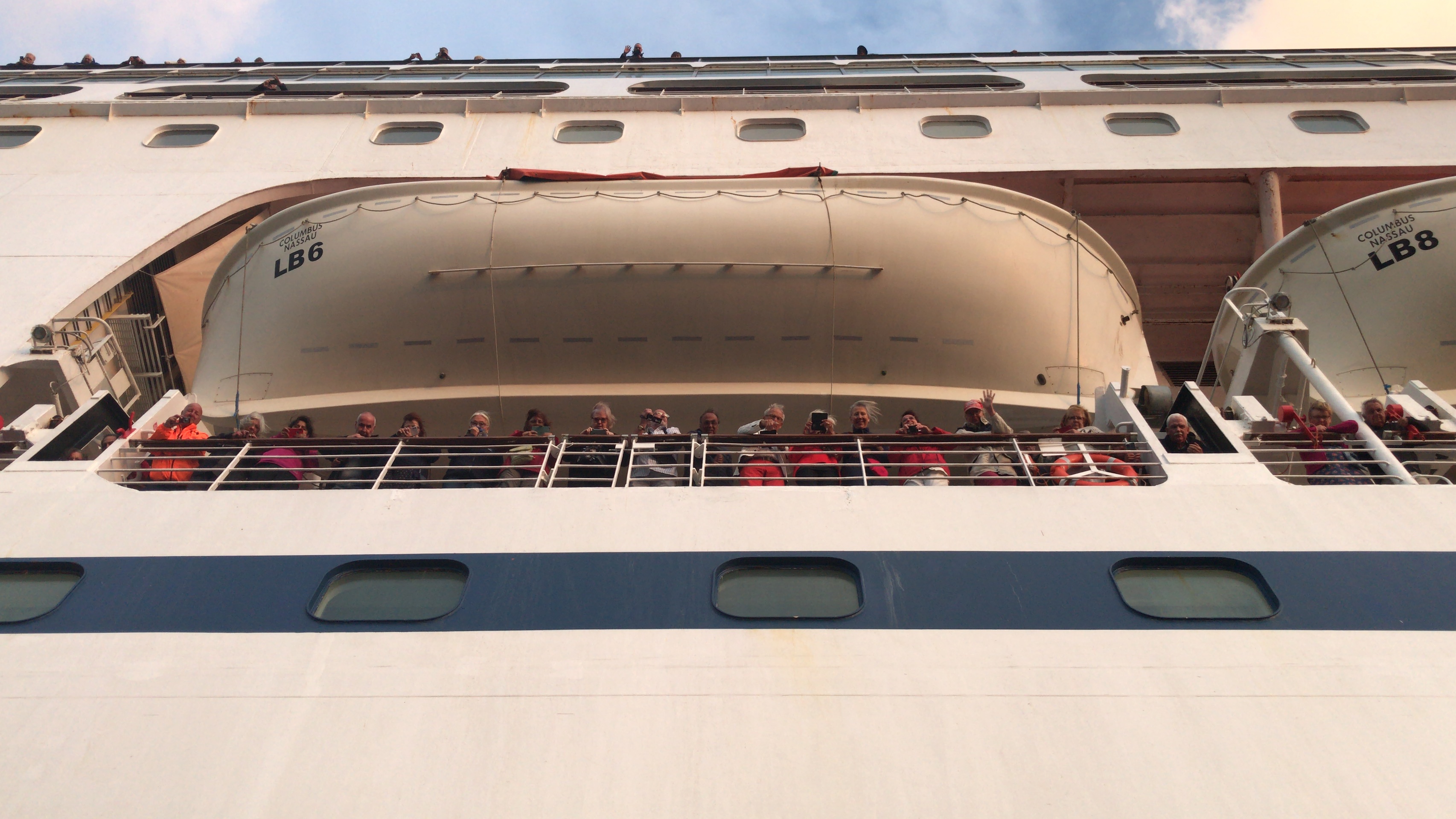 As the harbour boat pulled away, Mr Johnson waved at the other passengers who had gathered at the gunwales to bid the octogenarian farewell.

Mr Johnson and his fellow passengers found out that Columbus was being sent back to the UK while sailing around Indonesia in mid-March. 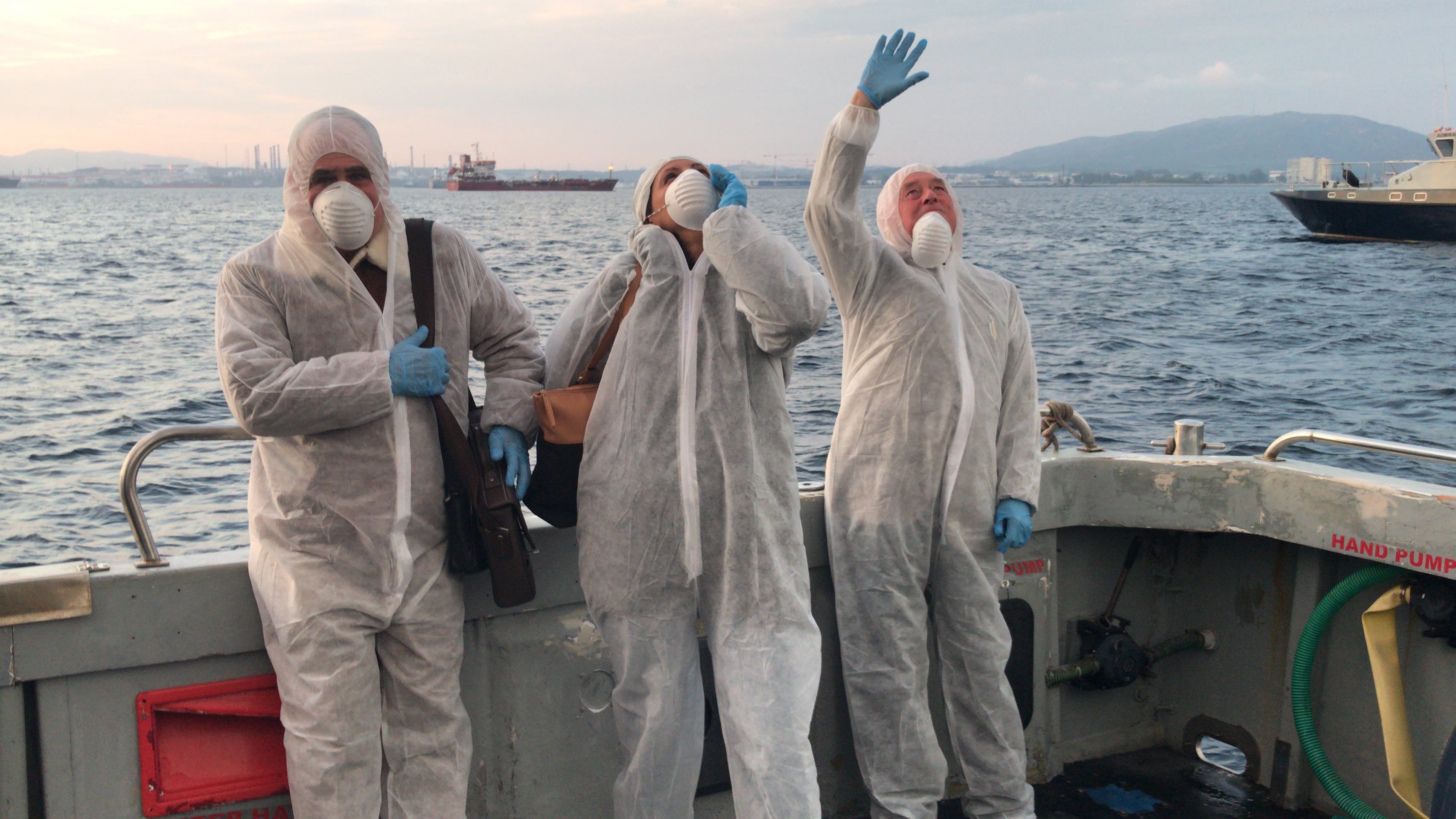 While Mr Johnson had donned a hazmat suit, plastic booties and a mask to leave the ship, underneath he was dressed in a very dapper suit, shirt and tie, an outfit he called his usual attire.

“I’m dressed sloppy when I am onboard but when I am involved with something I do it right,” he laughed.

As he made his way on board Ultimate Dream to the Port of Gibraltar, he disclosed that he was somewhat relieved that he was on his way home.

“Because I was frightened of having to spend two nights in the UK because I couldn’t get a flight,” he said.

“I am relieved I am getting ashore but I am disappointed that it has not gone as planned.”

“But that is God’s will, tough luck, you have made it through and I just hope that now I can wear out the problem that everybody has.”

He noted how excellent it was that Gibraltar had such a low number of Covid-19 cases and no deaths.

“So maybe there is a chance for me,” he joked.

The episode has not put the avid shipping spotter off cruising and he has promised himself he will return to the ocean but for a shorter length of time. 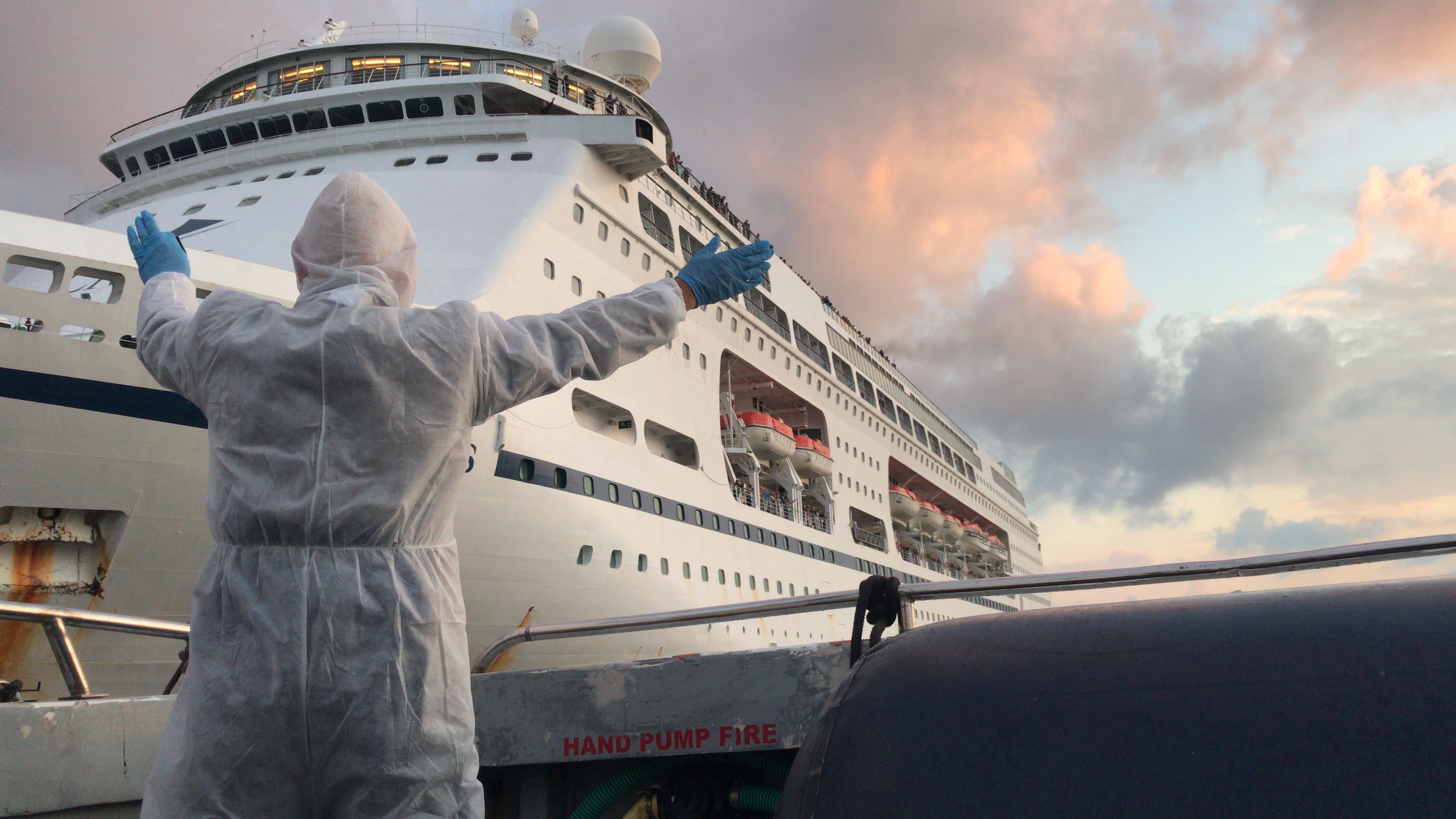 For those who spent days organising Mr Johnson’s return, having him back on dry land was a relief.

As part of its lockdown, Gibraltar has banned cruise ships from carrying out anything but technical calls.

But in recent days, the port has also allowed a small number of people to disembark from vessels in order to get home, including a British cadet who was allowed to fly to the UK.

Allowing Mr Johnson’s disembarkation required the coordination of multiple agencies and local businesses, including clearing from public health officials. The fact the ship spent weeks at sea and had no health problems on board helped.

“The important thing is that this elderly gentleman is back in the comfort of his home,” said George Dyke, a director of Incargo Shipping, who was instrumental in organising the operation.

Albert Victory, coxswain and owner director of Neptune Marine, was approached by Mr Dyke to assist in the repatriation of Mr Johnson.

He eagerly accepted and together with three other crew members, seaman Stephen Chiplona, coxswains Frank Ajudo and Christian Bonfante.

Used to crew changes out in the bay or the strait, Mr Victory and his crew were unfazed by having to pull up alongside the large cruise ship.

They had Mr Johnson off the vessel and ashore in less than 15 minutes.

All of the companies involved gave their time and assistance for free.

In addition, George Desoisa from GibMaroc provided Mr Johnson with fresh fruit, vegetables, bottled water, bread and other items to get him through the next couple of days. 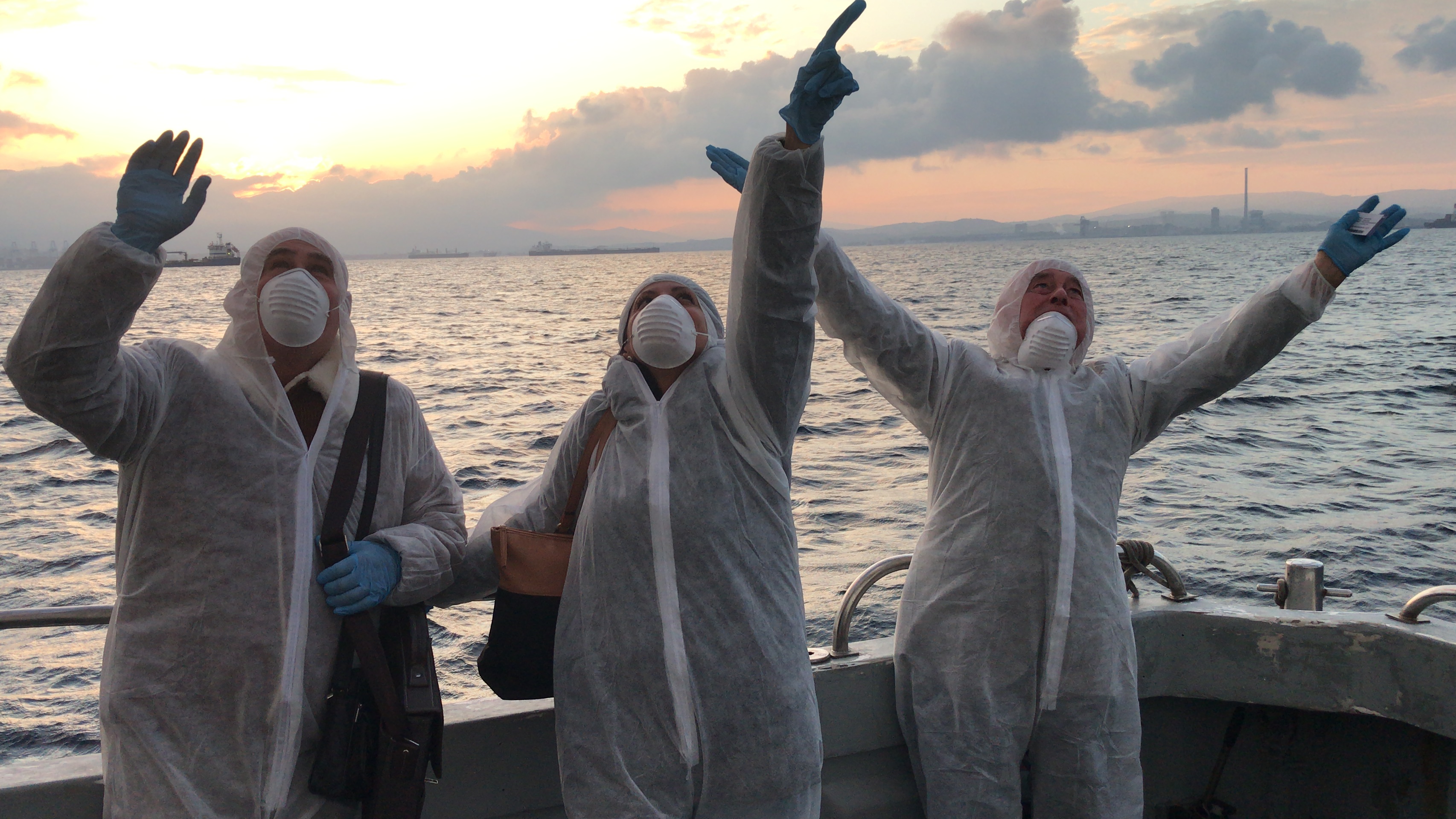 Upon hearing of this donation Mr Johnson stated: “Oh good heavens, thank you.”

“They are really looking after me,” he added.

Mr Johnson was collected from the dockside by a taxi which took him directly home.

He will now spend an undefined length of time locked in at home, where he will also celebrate his 82nd birthday later this month. 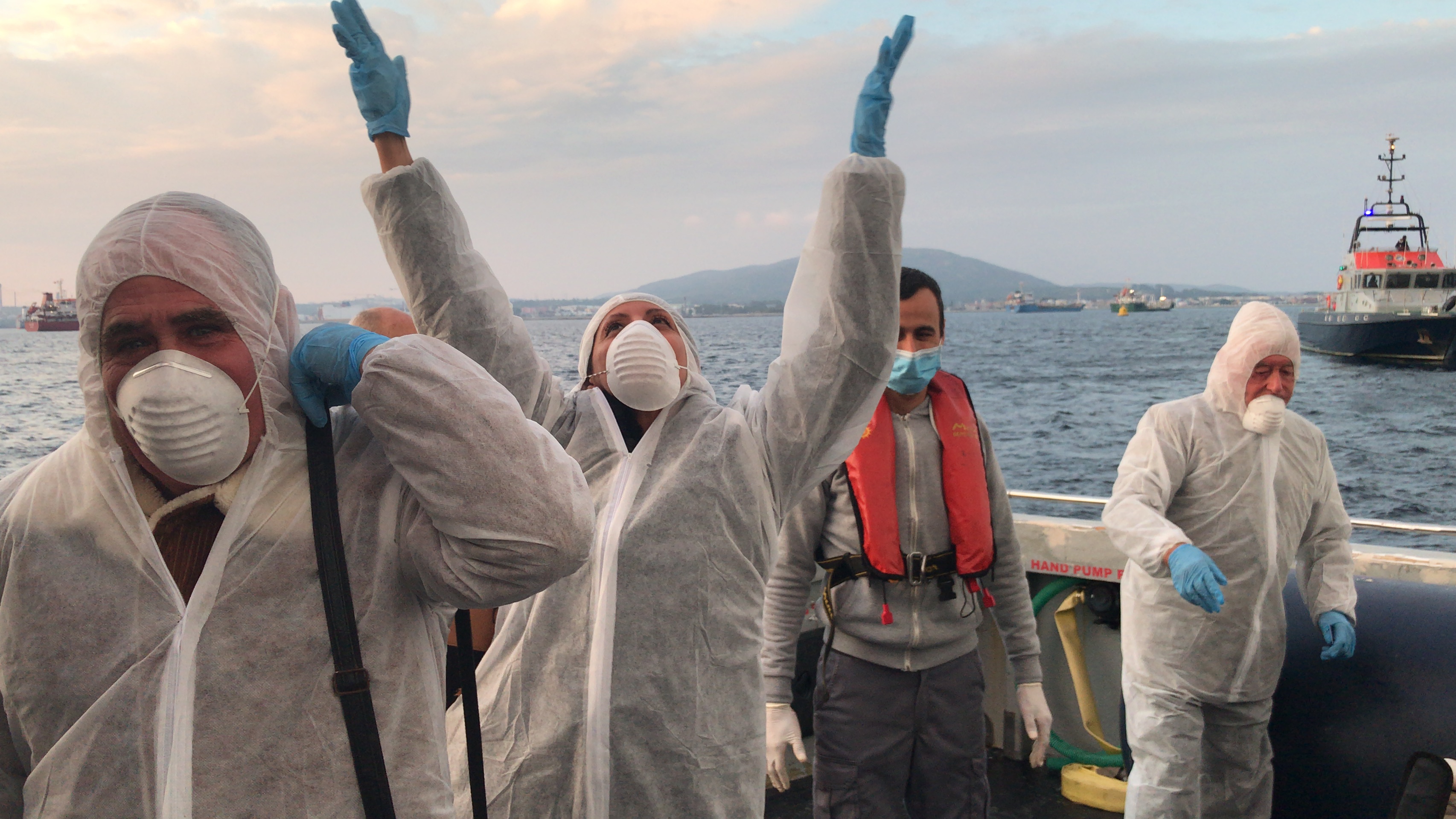 Mr Johnson was not the only to disembark from Columbus.

Spanish nationals Simon Cruz Ojuelo, 62, and Silvia Mercedes Villacis Landivar, 47, were also allowed off and were taken straight to the border, where they were allowed to cross thanks to the cooperation of Spanish authorities.

Relatives were waiting on the other side and the ship was not allowed to leave until the couple were in Spain.

Paul Foster, from Paul Foster PR, which represents the company, told the Chronicle that Columbus is currently sailing on a 7,842 nautical mile repatriation voyage directly back to the UK, with 907 passengers including 602 British nationals and 619 crew members onboard.

CMV is working with the UK Department of Transport, Border Force, UK Public Health, the Port of Tilbury, as well as the Cruise Lines International Association (CLIA), to confirm details of Columbus’ arrival into London Tilbury on Tuesday next and the disembarkation process that will take place.

“We are tremendously proud of our onboard and shoreside teams for their fantastic job in delivering this effective repatriation operation to bring our passengers home,” said Christian Verhounig, Chief Executive at Cruise and Maritime Voyages.

“On behalf of the directors, staff and especially our hard-working crew CMV would like to thank all our current passengers for their support, patience and understanding at this time.”

He also stressed that during the repatriation process, the company’s top and overriding priority was the health and safety of all its passengers and crew.

“Columbus remains under heightened levels of hygiene protocols and all passengers are screened for symptoms,” he added.