Beat Covid App 'could have been used more', says Isola

The role of the BEAT Covid app during the pandemic could have been more extensive, the Minister for Digital and Financial Services has said.
Due to the BEAT Covid app’s tight security, no records were kept of how many people received exposure notifications, meaning that it has been tough to gauge its impact.
This, compounded with the fact that positive cases were not offered a code used to notify their contacts and instead needed to request it, has meant that its effectiveness has been curtailed.
Since the app was launched last June, some 105 positive cases have requested a special code which would notify any close contacts, but the true impact of the app is unknown.
This is as the Contact Tracing Bureau were not asked to keep records of people calling following an exposure notification from the app.
The Beat Covid app has cost the Government €70,000, been downloaded 33,146 times, and is currently active on 11,171 devices.
“If we go back to the very beginning, we opted for a platform and a system which limited the amount of data on people’s phones and limited who had access to that data, and the end result was nobody did,” the Minister for Digital and Financial Services, Albert Isola told the Chronicle.
The app works by sharing information with other devices, which have also downloaded the app and is within range of two metres and for a time frame of 15 minutes.
If a person is in that range for that length of time, the app will register the contact.
Those details are retained for 14 days, after which this information disappears.
Mr Isola said no one, not even the phone owner, will know how many people it has registered.
The idea behind this was to ensure the utmost privacy.
But this means gauging how effective the app is is not currently possible. 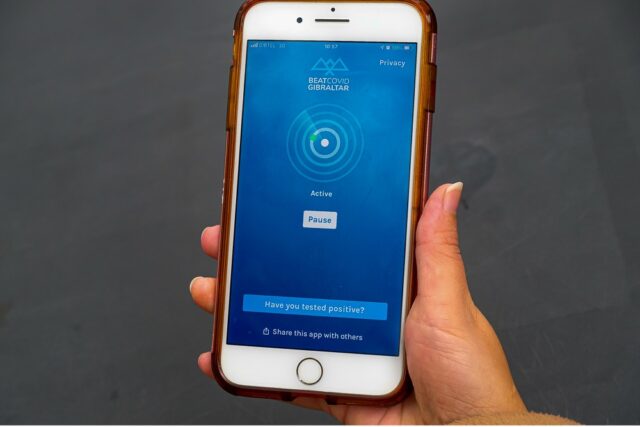 People who receive an exposure notification are meant to immediately call the Contact Tracing Bureau (CTB) and seek advice.
The CTB have not taken records of the number of people calling up after receiving an exposure notification and Mr Isola believes that more could have requested that code but this was not noted by the CTB.
“No, they don't keep a list of how many people have it,” Mr Isola said.
“Again, we put things into context in the cold light of day.”
“Today with X percentage of our population vaccinated the pressure on the health service is nothing like what it was two weeks ago, four weeks ago, six weeks ago, just imagine at that time when they were getting when we had 1300 cases positive the hospital is under extreme pressure as were the Contact Tracing Department, as were the people receiving calls.”
“There was no requirement and we didn't ask them to note down if they were calling as result of an [exposure notification].”
“Inevitably they would say ‘I've had an alert my phone that I've been close to someone’, [CTB] would note that down, they would then be told what to do.”
“So, in terms of monitoring how many people - we don't.”
Mr Isola added: “The GHA rings you and says you're positive, the last thing on your mind is ‘Can I have the code for my telephone?’ There's a panic.”
Mr Isola recognised that the CTB should have offered this to positive cases when they called.
“They should, but again when you’re under pressure like they were, when it's three in the morning and you get a phone call, in the cold light of day, yes they should,” Mr Isola said.
“In the reality that we live today, I was never ever going to tell one of those people that work their guts off ‘You should have done this, you should have done that.’”
“They did a damn good job and I'm happy to reflect that, to say that we are at the outer end of that problem.”
“Did the app work?”
“I think Fabian said on day one if this app serves to notify one case and save one life, it's been worth every second of work that we put into it and I've got no doubt that it did.”
“I'm very satisfied with the work that we did. Could it have been used more? Yes.”
Mr Isola acknowledged that despite the app not being used as widely as anticipated, the CTB have worked hard to ensure that all possible contacts have been identified.
“Also, in a community the size of ours, you know if somebody's tested positive and you know them, with or without an app, you know pretty damn quick because you know everyone,” Mr Isola said.
Mr Isola added that the app picks up people that the person spends significant time with.
“Could it have worked better? Yes, of course.”
He added: “Did it work? I think it did work. Did it provide us with results? It did provide us with results. Could it have been better? Everything can be better.”