A national charity to support UK police dogs has been launched, with retired police dog Finn, a Britain’s Got Talent finalist, named as the official ambassador.

Finn, who appeared in the 2019 series of BGT, alongside his handler Dave Wardell, wowed the celebrity judges, including Alesha Dixon and Simon Cowell, with his magic tricks and mind-reading skills.

The Thin Blue Paw Foundation has been set up to support both serving and retired police dogs in the UK.

There is currently no financial support for police dogs, meaning the cost of their care falls to their new owner or ex-handler. Unable to get pet insurance due to their working life, many are left with ongoing vet bills which can amount to thousands.

The foundation provides financial support to the canine heroes and their owners, enabling them to have a long and happy retirement.

One of the dogs helped by the foundation is German Shepherd Elsa, a retired Surrey police dog. She was adopted by Steve Ellis and his wife in August last year but less than a month later they discovered a suspected-cancerous lump on her mammary gland.

She was rushed to the vets for investigation and treatment with an operation costing £1,500 — the financial burden of which fell on her new adopted owners.

Elsa is now signed up to receive support from the Thin Blue Paw Foundation for future treatment, meaning the couple can enjoy their time with Elsa without worrying about how to pay for future vet bills.

Mr Ellis said: “I’m so grateful that the Thin Blue Paw Foundation now exists, without a charity like this our retried police dogs wouldn’t have the support they so very much deserve.

“It’s thanks to the Thin Blue Paw Foundation that we can spend quality time with Elsa, knowing that if we need support, they will be able there to help us.”

Ambassador for the charity Finn was stabbed in the line of duty in 2016 while pursuing a 16-year-old suspect. The attack led to an online campaign and in 2019 Finn’s Law was passed, which prevented those who attack or injure service animals from claiming self-defence. 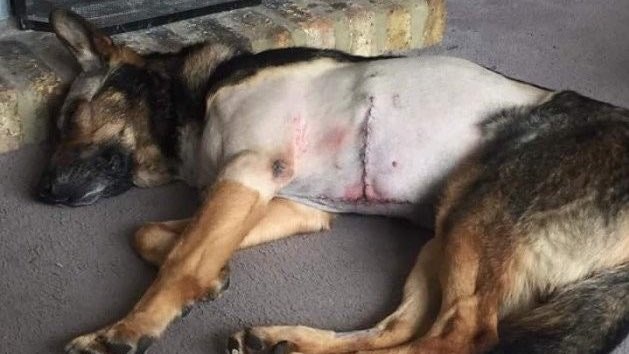 Pc Wardell, a trustee for the foundation and owner of retired police dog Finn, said: “I’m extremely proud to have founded this charity with our board of trustees.

“As a serving police dog handler, I know first-hand the amazing work these incredible canines do on a daily basis, from finding suicidal people to catching armed robbers it’s only right that when they retire, they’re treated like the heroes that they are.

“I will be forever grateful to Finn for saving my life on that frightful night in October 2016 and I can’t wait to support other retired police dogs through the foundation, who like him have served their country with courage, bravery and selflessness. We will be forever in your debt.”

The charity has now set up a website, where donations can be made at: www.thinbluepaw.org.uk