Prime Minister Boris Johnson said on Sunday the UK Government would “never, never, never” allow any change to the British sovereignty of Gibraltar, adding that the parts of Theresa May’s Brexit deal relating to the future of the Rock “will be preserved”.

Mr Johnson was speaking at the Gibraltar reception on the margins of the Conservative party conference in Manchester, where he delivered a rumbustious speech laced with patriotic jingoism that drew cheers and applause from a packed room.

The Prime Minister trumpeted the UK and Gibraltar's longstanding relationship, underscored Gibraltar’s contribution to the Andalusian economy, took a swipe at Labour leader Jeremy Corbyn and compared the UK Government’s support for the Rock to the ancient Pillars of Hercules.

"I think we know where the other Pillar of Hercules is," he said.

"I think we know which is the symmetrical Rock of Gibraltar."

"It is the Rock of the British Government, which will never, never, never allow the sovereignty of Gibraltar to be diluted, or adulterated or in any way changed."

"That is our position and that is the position of the people of Gibraltar..."

Mr Johnson said the UK would protect Gibraltar in any withdrawal agreement reached with the EU.

He said Gibraltar was “absolutely vital” to the Andalusian economy “…and we think that our Spanish friends and partners understand that.”

CROSS PARTY BACKING
The Prime Minister's comments come after similar public statements from senior figures in both Labour and the Liberal Democrats, signalling solid cross-party support for Gibraltar not just on life after Brexit, but also on the crucial issues sovereignty and self-determination.

Despite the upheaval in British politics and the deeply opposed, entrenched positions on Brexit, all the main political parties in the UK share some common ground when it comes to Gibraltar.

Gibraltar itself has been present at all the main party conferences, with ministers and officials from Gibraltar House in London engaged in intense lobbying aimed at protecting this community's position regardless of the fractured nature of UK politics.

At the Labour conference last week, shadow Foreign Secretary Emily Thornberry addressed guests at the Gibraltar reception and also underlined her party's staunch backing for Gibraltar and the Gibraltarians, who she acknowledged had voted overwhelmingly for Remain and were "my kind of people". 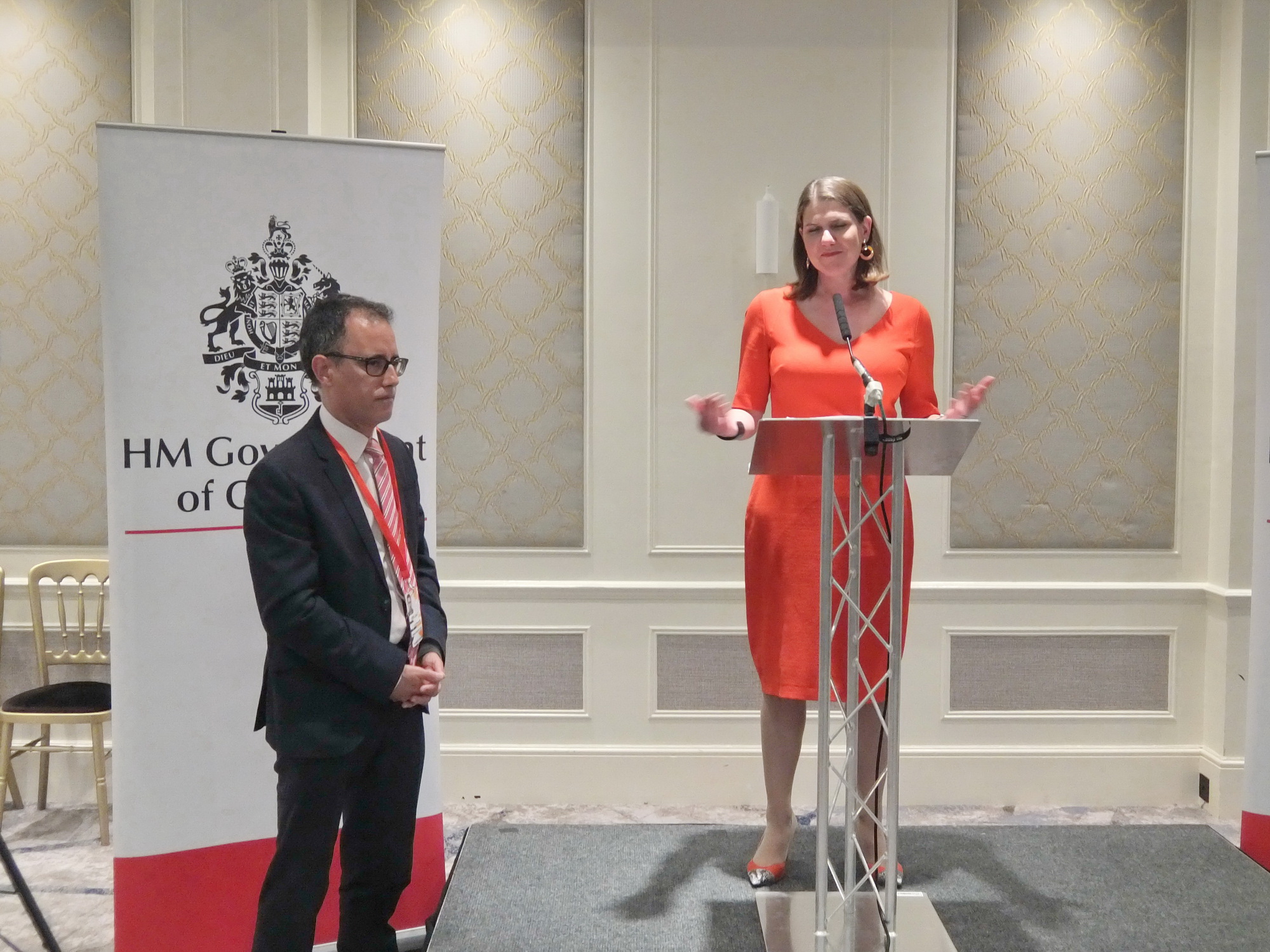 "This Tory government doesn't seem to give a stuff about the impact of Brexit on the people of Gibraltar or, frankly, on the rest of the United Kingdom," she said.

The Prime Minister, she told guests at the reception, "had nothing meaningful to say" about the impact of Brexit on Gibraltar.

"That's what I've had to conclude because no friend of Gibraltar could be possible be prepared to get behind Boris Johnson's disastrous vision of Brexit, one that leaves the people in Gibraltar worse off…and thousands of people facing huge delays to get to work every day between Gibraltar and Spain."

Mr Johnson's vision of Brexit "…will leave ordinary people in a worse state."

And she added: "Labour has always made it clear that we are not prepared to accept any change in the rights or status of people living in Gibraltar because of Brexit."

"And we know that the best deal for Gibraltar is the deal that we already have, remaining in the EU."

"So in my view, we need to campaign to remain and I'm sure that the people of Gibraltar will be doing exactly that."

A similar message had already been delivered three weeks ago at the Liberal Democrat conference by the party's leader, Jo Swinson, who signed the guest book at the Gibraltar stand with this message to the Rock: "We stand with you."

Addressing the Gibraltar reception at the start of the Lib Dem conference, Ms Swinson said Gibraltar had "many, many friends in the Liberal Democrats" and that she spoke for the whole party when she wrote those words. 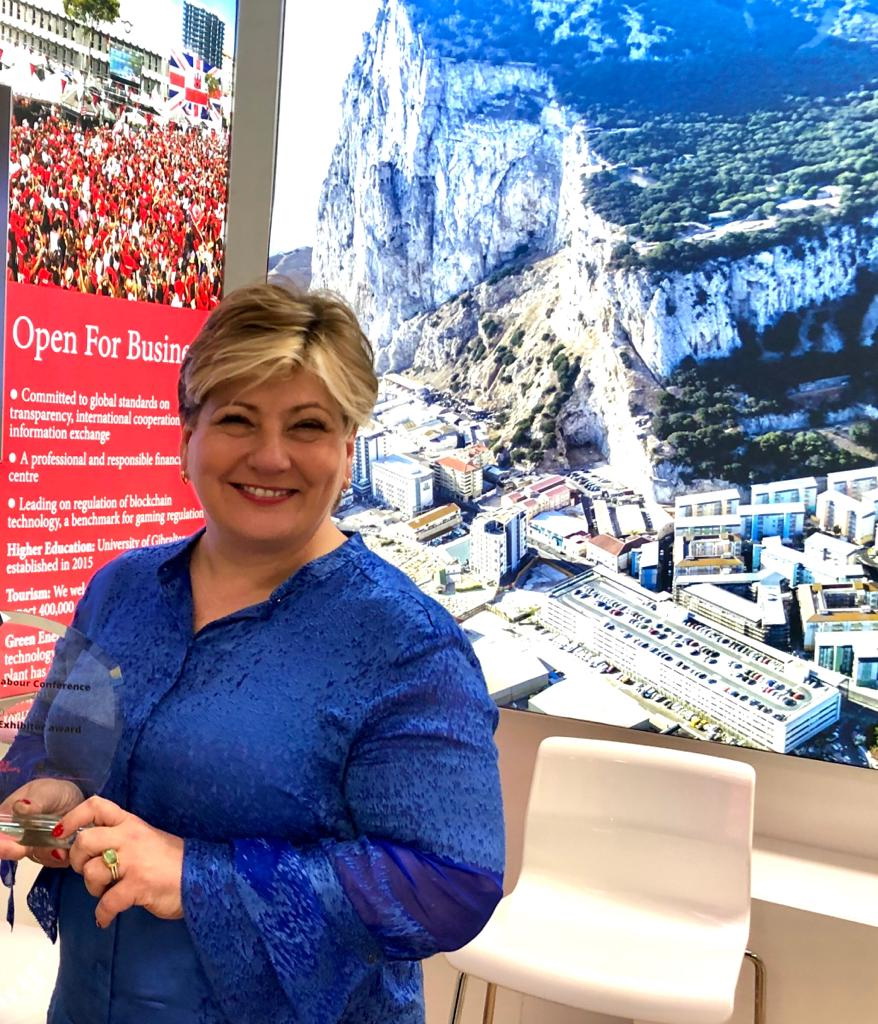 She was speaking after the Liberal Democrats toughened their anti-Brexit stance, formally adopting a policy to stop the country from leaving the EU if the party wins power at a national election.

"The impact of Brexit is felt by many of the most vulnerable, whether that's those in our society who have the least in terms of resources, or whether it's those parts of country that can too often be forgotten about," she told guests.

"Whether it's those in the border communities in Northern Ireland, or those people living in Gibraltar."

"The complexity of the situation, with 15,000 crossings a day, the impact of Brexit on a place like Gibraltar, is truly shocking."

"And that's why we have to stop Brexit."

The Prime Minister's appearance at the Gibraltar reception on Sunday came at a time when he is under intense political pressure, not just over Brexit but also following controversy about his personal life.

The Prime Minister was this weekend forced to deny claims that he squeezed the thigh of a female journalist under the table during a private lunch.

He has also faced allegations about his relationship with American entrepreneur Jennifer Arcuri and whether she enjoyed preferential treatment while he was mayor of London.

On Sunday, Mr Johnson said he would not quit as Britain's Prime Minister even if he fails to secure a deal to leave the EU, insisting only his Conservative government can deliver Brexit on October 31.

At the beginning of his party's annual conference, Mr Johnson wants to rally his party with a "do or die" message that he will deliver Brexit by the end of October, with or without a deal.

But there are hurdles to clear, not the least of which is what Mr Johnson calls "the surrender act", a law parliament passed to force the Prime Minister to request a Brexit delay if he has not secured a deal with Brussels by an October 17-18 EU summit.

Mr Johnson again declined to explain how he plans to circumvent that law and deliver on his Brexit promise, deepening uncertainty around Britain's biggest trade and foreign policy shift for more than 40 years.

Asked if he would resign to avoid having to ask for a delay, Johnson said: "No, I have undertaken to lead the party and my country at a difficult time and I am going to continue to do that. I believe it is my responsibility."

Opposition MPs have been highly critical of Johnson's reference to "the surrender act", saying his language is stirring even more division in a country that has remained deeply split since the 2016 referendum on EU membership.

Mr Johnson was hosted at the Gibraltar reception on Sunday by Albert Isola, Gibraltar’s caretaker Minister for Commerce, who gave him a Gibraltar rugby shirt - "I was casting about last night for something to wear in bed, and here it is," Mr Johnson joked - and told guests that whatever happens with Brexit, "we are sticking with Britain, do or die”.

The Chief Minister, Fabian Picardo, had been unable to attend the conference given that he has electoral commitments in Gibraltar, including a GBC leaders’ debate this evening.

Mr Johnson used that absence to poke fun at Labour, which has opposed Mr Johnson's calls for an election fearful he will lead Britain out of the EU without an agreement before any such poll is held.

"I'm sorry my friend Fabian Picardo can't be here but he has the great good fortune of being able to embark now on a general election," he said.

"And my friends, do you not think it is time that the great chickens waddled hen coop and gave us the general election this country needs and deserves?"

"And will we not send them packing?"