A British-American explorer has officially become the first woman to reach Earth’s highest and lowest points.

After scaling the peak of Mount Everest in 2012, Vanessa O’Brien has travelled via submersible to the bottom of Challenger Deep, diving 10,925 metres below the waves of the western Pacific Ocean – a double feat which has been ratified by Guinness World Records.

Her June 12 voyage saw the 55-year-old spend three hours at the bottom of the southern end of the Mariana Trench, longer than any other woman, with her craft enduring up to eight tonnes of pressure.

“The journey to the bottom takes four hours… it’s a hard place to get to,” Ms O’Brien told the PA news agency.

“It may sound funny but I found the (Everest and Challenger Deep) experiences very similar.

“Oxygen is in short supply, you’re sitting for long hours or you’re standing, you’re climbing or moving very slowly – even the extreme concentration for short periods of time.

“And they both have a ‘summit’ moment – the top or the bottom.

“But they’re incredibly beautiful places and it’s always an honour to visit them because they help us understand and learn so much more about the environment.” 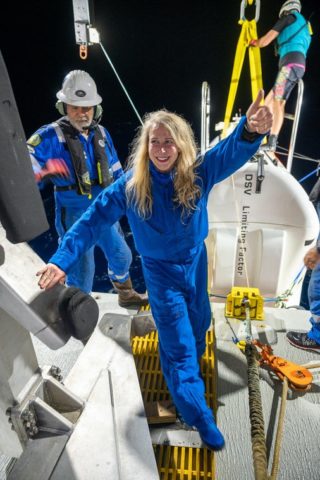 She is the second woman to reach Challenger Deep after astronaut Kathy Sullivan, who was part of Ms O’Brien’s team, just days before.

Ms O’Brien praised Mr Vescovo for the female-oriented team he assembled for the mission, which included astronaut Ms Sullivan, a female lead surveyor and honorary commander Durdana Ansari who presented her with a Royal Navy ensign to take on the journey.

“All the key players outside of Victor were women,” she said.

“To make this journey successful for him he chose to surround himself with some powerful women that could make this a success – I don’t think that was by accident.”

Ms O’Brien became the first British or American woman to summit K2, the second-highest peak in the world, in 2017 and has climbed the highest peak in every continent faster than any woman, taking just 295 days to do so.

A Fellow of the Royal Geographical Society, she has also skied to both the North and South Pole and climbed five peaks over 8,000 metres.

Ms O’Brien hopes her latest achievement will inspire other women to take on new challenges, adding that they are great candidates for expeditions.

“These expeditions tend to be long and they tend not to go according to plan… there’s a lot of stop-go, stop-go and the men will lose interest.

“The women are like ‘no worries I’m cool’… they’ll hang out and wait. I’ve always found women are really good at endurance.

“There are lots of opportunities for women – not just in Stem (science, technology, engineering and maths) – but traditionally women have shied away… it doesn’t have to be that way.”

Ms O’Brien hopes the submersible dive will draw attention to Seabed 2030, a collaborative project between the Nippon Foundation of Japan and the General Bathymetric Chart of the Oceans (GEBCO) to map all of the ocean’s floor by 2030.

She added that environmental efforts have understandably been “put on hold” by the coronavirus pandemic and urged efforts to find sustainable solutions to mankind’s impact on Earth.

“We probably saw a reduction when this all gets measured in fossil fuels and that will probably be a good thing – but that’s not really sustainable,” she said.

“I would never want another global pandemic for a bit of green good.

“What I would rather do is have some really good intellectual energy and capital going into thinking through some sustainable solutions… and we have to have global alignment.

“The pandemic is a good example of how we are one place – one thing will happen in one place and have an effect in another.

Importation of breeding livestock could halt unless ‘essential’ funding provided