Over the past month British Forces Gibraltar has seen several senior visitors to the Rock including UK Minister for the Armed Forces, James Heappey.

They were followed by Lieutenant General Robert Magowan, Deputy Commander UK Strategic Command. Both visits included tours of a number of MOD sites, meetings with civilian and service personnel as well as calls on key figures in the wider Gibraltar community. 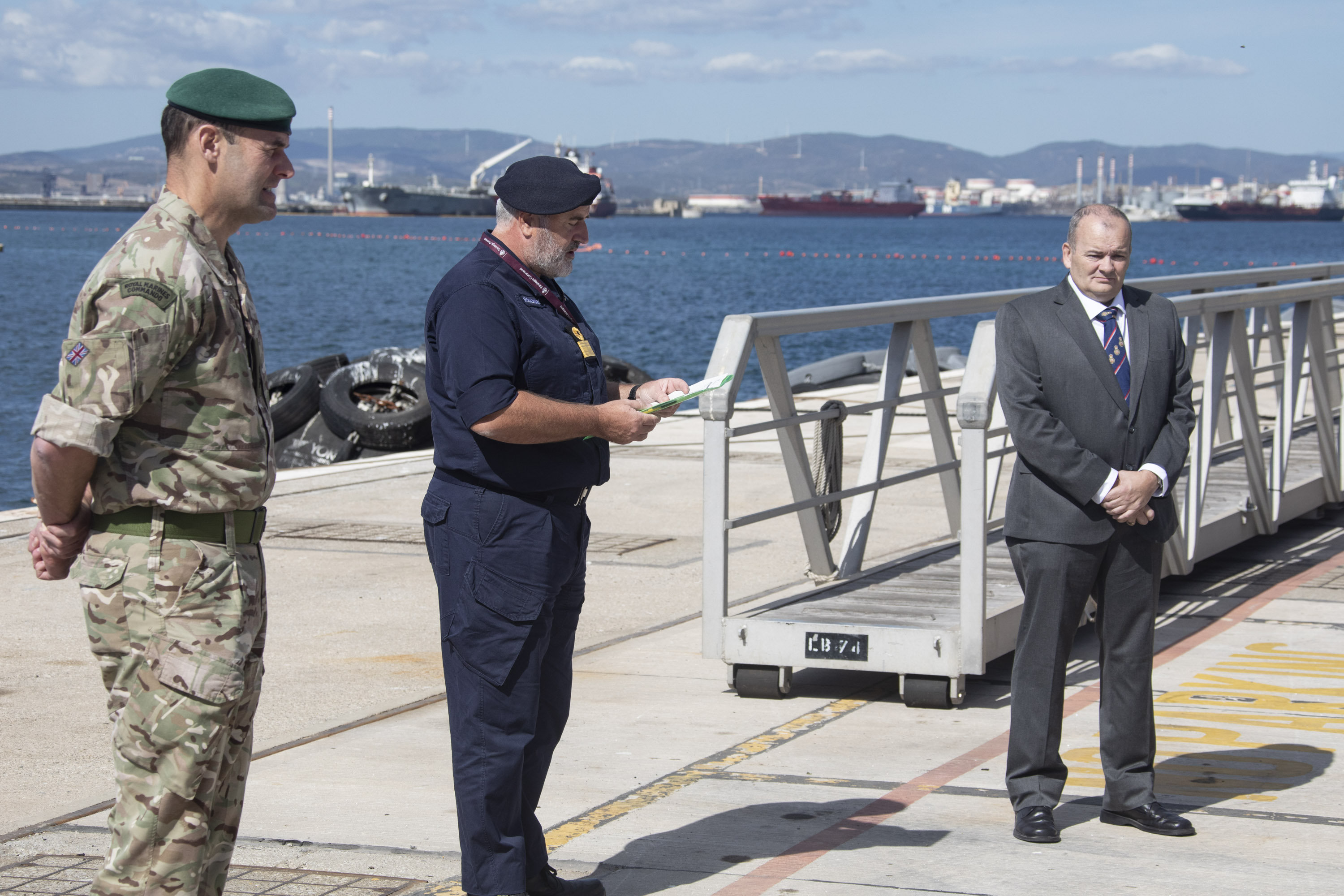 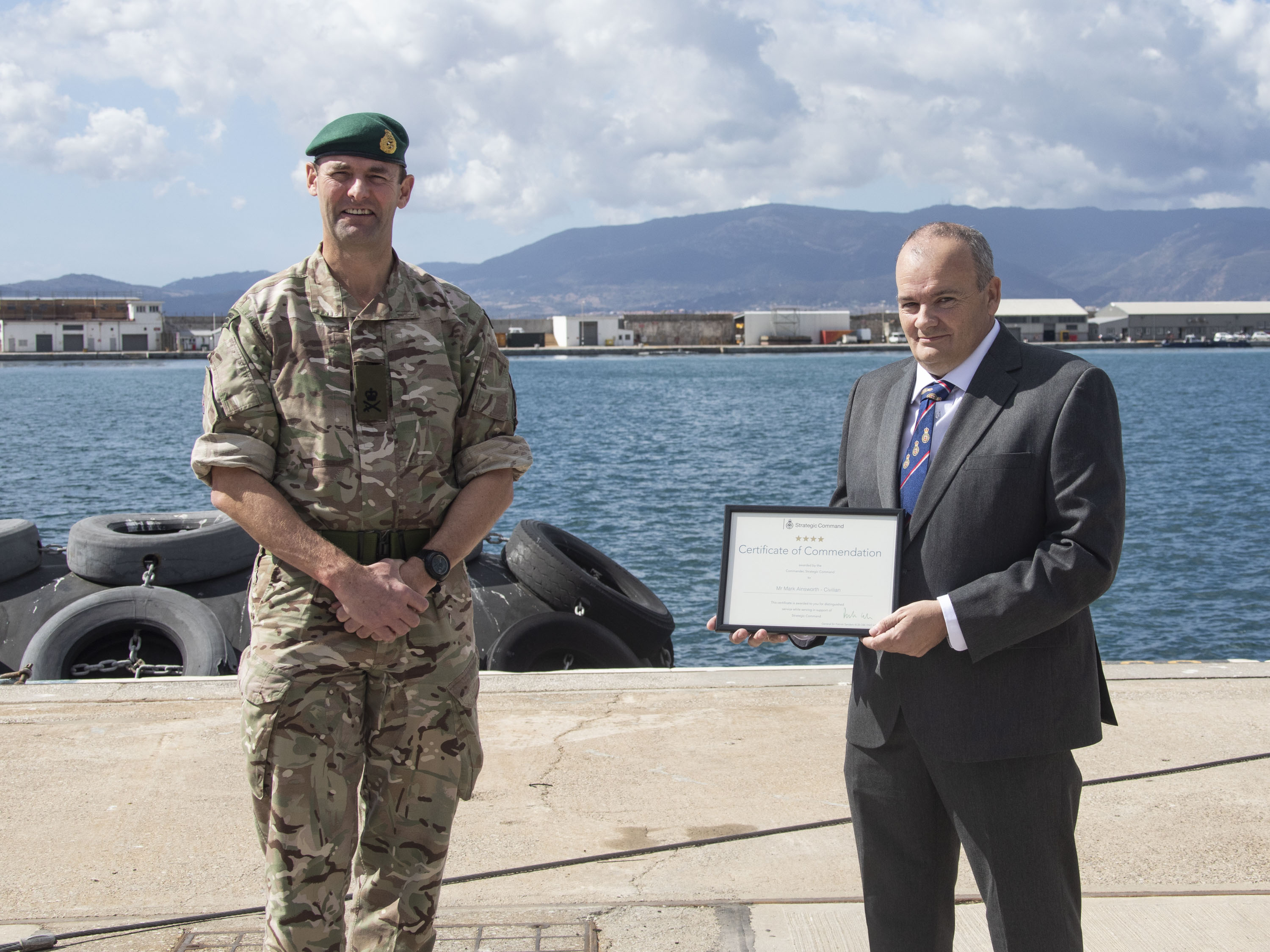 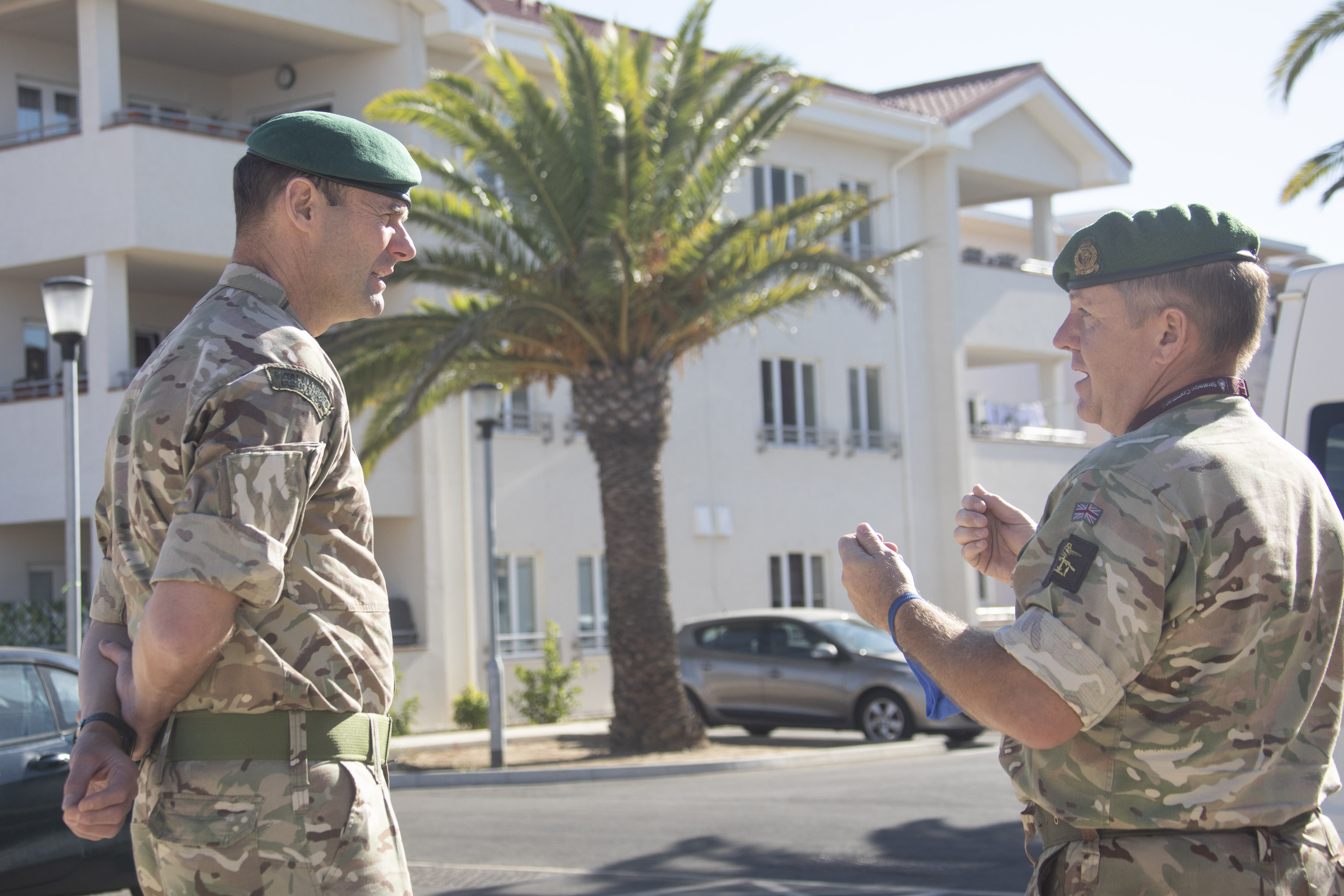 During Lt Gen Magowan’s visit, he presented a 4* Commendation to Mark Ainsworth.

Mr Ainsworth was nominated for the award in recognition of his various roles in Gibraltar, including his voluntary work with the Royal Gibraltar Cadet Force.

“Mark started his long association with the British Army as an Assistant Storeman with the Prince of Wales Own Regiment in Fallingbostal,” BFG said.

“In 1983, he secured a job with the Ministry of Defence in Gibraltar, gaining a permanent post as Armaments Storekeeper in 1988. He promoted to Storage Manager in 2010.”

“Mark joined the Royal Gibraltar Regiment (RG) Volunteer Reserves in 1985 and served with distinction until transferring to the RG Cadet Force as an instructor, often using his annual leave to accompany cadets on camps in the UK. He was awarded the Efficiency Medal in 1997, the clasp in 2002 and the Volunteer Reserve Service Medal in 2007.”

“Mark is passionate about The Rock and has dedicated much of his life to the Gibraltar Regiment and continues to do so with the Cadets. A member of the Gibraltar Ornithological and Natural History Society, Mark is credited with discovering many historically important locations in Gibraltar during his explorations.”

“His discoveries include continuations of known caves, new lakes and the ‘Operation Tracer’ Cave. During a 10-year research period he wrote several publications as co- author in partnership with Royal Holloway University. Mark is also the founder member of the Fortress of Gibraltar Group which was formed in 2015.”

“Having devoted his life to the MoD and Gibraltar, training countless cadets who have served successful service careers and sharing information he has collected with the general public and societies he supports; he is truly worthy of recognition.”

Talking to a small gathering of Mr Ainsworth's friends and colleagues, Lt Gen Magowan talked about people’s success and touched on the importance of inclusivity and empowerment.

“If people feel part of the team, if they are recognised in that team, they will feel valued and stay,” Lt Gen Magowan said.

“If not, they will leave. Whether we are at the top of the organisation or are doing critical work elsewhere across Defence, we all have a responsibility to look after those within our teams.”

“I hope that Mark, and people like him, feel empowered, that we recognise his talent and the work he has put in, to give him the freedom to get on and do what he does best - getting on with the job.”

Subsequent to this, Lt Gen Magowan visited serval British Forces Gibraltar sites, including 4 Corners, the Royal Navy Gibraltar Squadron, the Royal Gibraltar Regiment and had an office call with HE the Governor.

Speaking about current and future plans, he said he was pleased to see so much investment and interest from the MOD and UKStratCom.

Investment has included the recently deployed P2000 craft for the RNGS, the procurement of two Fast Patrol Vessels as replacements, and the development at 4 Corners.

“This, along with other investment across the Rock including the refurbishment of the Tower on the Naval Base, now well underway, has all been done in close co-operation with HMGOG,” British Forces Gibraltar said.

“Indeed, during his visit, the Northern Dispersal at RAF Gibraltar was opened by HE the Governor; a further indication of Gibraltar’s utility.”

“After Lt Gen Magowan departed, with a final visit to the RG, CBF commented that these visits are extremely important as they provide him with the opportunity to highlight the tremendous amount of work being undertaken across the British Forces community.”

“It also allows him to engage personally with senior personnel on the future of the military footprint in Gibraltar and how we can better support Defence through further investment and innovation.”

EDITOR'S NOTE: An earlier version of this article incorrectly referred to Mr Ainsworth as Mark Atkinson. The story has been corrected.