The final day began with a lecture by Professor Will Creswell from Saint Andrews University who noted how “Fifty years ago, what we knew about the migratory connectivity of Palaearctic-African migrant birds was based on anecdote: occasional ringed birds showing exceptional wintering site fidelity contrasting with the general observation of many species shifting their localized range in Africa through the winter in response to changing environmental conditions.” Tagging studies in the last twenty years has revolutionized the field of migratory connectivity; “we finally know,” he added, “quantitatively, where many species spend the non-breeding season, that most have a very high degree of site fidelity, and that migratory connectivity is low for most species.” Using an evolutionary framework “where individuals in a brood vary in both their average and range of migratory directions,” there is differential survival, and “successful routes and locations revisited as adults,” allows a clearer understanding of migratory connectivity. 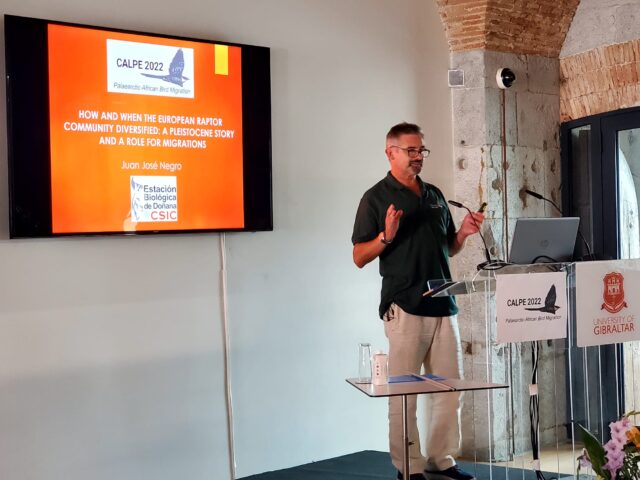 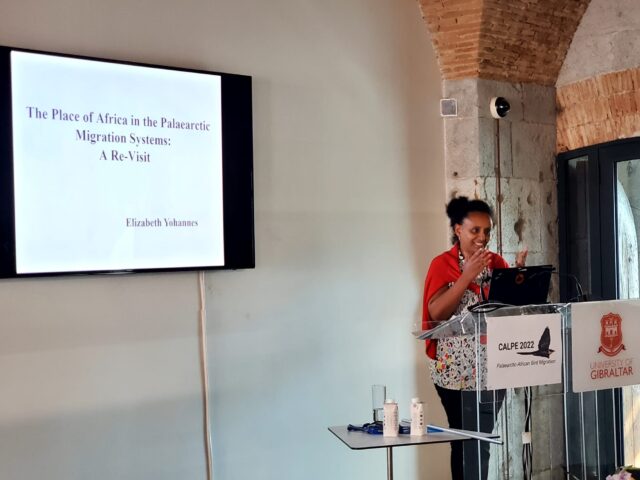 Next on was Leo Zwarts, an independent researcher from the Netherlands, who presented results of recent fieldwork undertaken in the transition zone between the arid Sahara and the humid Guinea zones. Fieldwork, that took place from 2011 to 2019, applied a random sampling regime at 1901 sites. Leo noted that: “The Sahel is thinly covered by trees, but nevertheless forms an important habitat for some 1,000 million tree-dwelling birds (among which 330 million migrants) living in this transition zone.” Bird distribution was mostly determined by the distribution of woody species rather than rainfall. Leo’s work both in wetlands and drylands are all a part of his main research question: “why are so many bird species overwintering in the Sahel in such decline?”

The next speaker, Professor Francisco Pulido from the Complutense University, Madrid, noted that: “Climate change is currently one of the major challenges to migratory birds, particularly because of the speed of changes and the increase in the frequency of extreme climate events.” Migratory birds have to adapt to environmental conditions and fitness depends on being “in the right place at the right time.” A strategy to adjust to environmental changes, he noted, “is to winter closer to the breeding grounds, thereby reducing travel time and the costs of migration.” Francisco discussed the potential of Palaearctic-African migrants to shorten migration distance and mechanisms for this, noting that: “the potential for overwintering north of the Sahara considerably varies among species. This is largely explained by differences in the control of migratory behaviour, and the flexibility of the migration program.”

The first speaker after lunch was Dr Chris Hewson, a Senior Research Ecologist at the British Trust for Ornithology where he leads on projects focusing on the migration strategies, habitat use, and population ecology of Palaearctic-African migrants, with a focus on population declines. He noted that many species of Palaearctic-African migrants “are currently in decline in the UK and across Europe. In the UK, this includes some of the most iconic and culturally significant species, and hence is a serious conservation issue.” Research of population trends has shown that the “extent and timing of the declines vary between groups of species classified according to the broad bioclimatic zones in which they spend the mid-winter period.” Recent tracking work is elucidating our understanding of migration strategies and Chris noted that this is “beginning to help us identify factors contributing to their population declines and how this new knowledge can be used to help formulate efficient conservation strategies.”

The next speaker, Professor Juan Negro of the Spanish National Research Council, who had been a speaker at Calpe 2010, noted that: “Europe may be considered as a diversity hotspot for diurnal raptors, with 38 breeding species,” comparing this total with North America at equivalent latitudes which “with twice the surface area, only holds 30 breeding species.” He explained that time-calibrated molecular phylogenies indicate that the species richness of diurnal raptors in Europe “has emerged recently due to the multiplication of sister species with similar trophic ecologies,” adding that the diversification of species “mainly took place in southern climate refugia during cold periods in the Pleistocene.” Compared to North American raptor communities, European ones have greater proportions of long-distance migratory species; Juan explaining that: “in the non-breeding season, when food resources are limited, the smaller species in every trophic niche migrate to Africa to avert competition.”

The final lecture of the day, and the Calpe Conference, was by Professor Elizabeth Yohannes, currently at the Swiss Ornithological Institute in Sempach, Switzerland. She highlighted that: “Africa holds a prime position in the wider Palaearctic migration system, receiving over two billion passerine and near-passerine birds each autumn.” After crossing the Sahara, she explained, many long-distance migrating species converge for a stop-over period below the Sahel and north of the Equator that lasts from weeks to months. Surprisingly, in the case of some species, this initial non-breeding period is “comparatively longer than the breeding residency phase at the Palaearctic and often equivalent to the residency at further non-breeding sites in Africa.” Competition is a factor in the maintenance of resident-migrant biodiversity and Elizabeth noted that: “coexistence of competitors is promoted by divergence of resources, contraction of species’ niche breadth, and by local ecological conditions,” adding that: “these possibilities require thorough investigation.”

The Minister gave thanks to all; he had been present for many of the weekend lectures and noted that: “It was wonderful to see so much new material... and newly-worked material... it stimulated very good discussion and no doubt, it’s inspired further work and further analysis.” With his politician hat on, he welcomely added that: “It’s been a wonderful conference; if I can make one slightly political point I think it’s a very good use of taxpayers’ money to which His Majesty’s Government of Gibraltar remains committed for many years to come.”

During Calpe, both in tea, coffee and lunch breaks, and lectures, there had been several almost subliminal references to the prominence of the Palaearctic versus Africa in the migratory systems discussed. The final speaker, Elizabeth Yohannes, born and raised in North-East Africa, for example, had explained how some species had longer non-breeding periods in Africa, than breeding periods in the Palaearctic. The Minister, I think, picked up on this nomenclatural nuance and concluded his conference closure speech saying that it would be of value to review the interesting subjects raised in Calpe in five years’ time and noted: “But I have one suggestion, and I think Elizabeth, you will appreciate this; we should call it a review of the African-Palaearctic Bird Migration Systems.”