Poisonous Portuguese Men O’ War have washed up on Gibraltar’s eastern beaches, with their small size making them hard to spot by an unsuspected beachgoer or dogs.

Marine biologist Lewis Stagnetto, from the Nautilus Project, explained: “It’s a siphonophore made up of four different animals.”

“So you have the animal that makes up the float.”

“You have the animal that makes up the stinger.”

“So all in all you have four separate animals living in a colony and each kind of gas bladder is one of the colonies made up of many individuals of one of those four types.” 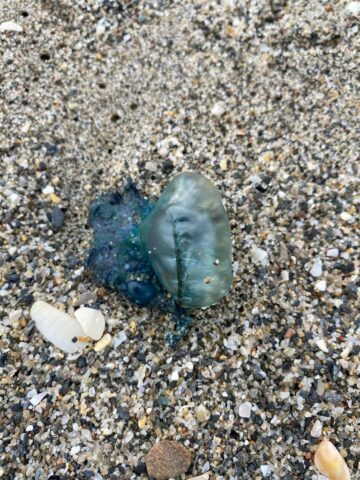 The ones that washed up on Eastern Beach are estimated to be eight months old on average.

People are often surprised when they see a Portuguese Man O’ War because the photographs of them usually portray them to be larger than they actually are.

“An adult is normally just over six or seven inches, no bigger than that and the others with increasing youthfulness if you like going down they can be as small as a couple of inches,” said Mr Stagnetto.

It is thought that they were pushed in onto the beach by the recent storm and are in the process of dying.

“When the bladder starts degassing they are dead. Definitely dying at present,” said Mr Stganetto.

He also warns people not to touch them as the sting is very painful.