So far, they have raised £25,000 which will be divided between Cancer Relief and Calpe House, two charities in which they have a close and personal interest.

The two cyclists finally crossed the border into Gibraltar late Saturday evening, October 7, together with members of the local cycling club who had accompanied them for the final push home.

A Royal Gibraltar Police escort led them across the runway and into Ocean Village where relatives, friends and supporters cheered them home. 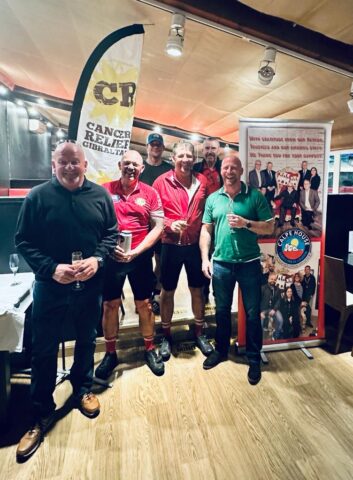 The route of ‘Clock2Rock 22’ took them from Westminster to Portsmouth and then down through the length of France before crossing the Pyrenees into Spain and onto Gibraltar.

The epic journey required an average distance of 250kms each day. Atrocious weather and strong headwinds marked the early days before encountering the physical and mentally demanding mountain climbs up to an altitude of some 1000 metres.

Lost time was putting the challenge at risk until a tactical change got the pair back on track. The riders and their support team of Neil Crawford and Mike Milward were aware that they needed to increase the time on the road and distance covered daily to more than 300 kms.

Sleeping was reduced to a few hours at night either in camp sites or simply in sleeping bags by the side of the road. This exhausting schedule brought the team back on target.

“In my Army life I've done some harsh training, but this is the toughest thing I've ever done,” said Mr McNulty.

“At times, especially on the hill climbs, I wondered if we were ever going to make it to Gibraltar, but we were spurred on, in the knowledge that the money we were raising was going to such good causes.”

Anyone wishing to support their achievement can do so via www.gofundme.com/clock2rock22