The Minster for Business, Tourism and the Port, Vijay Daryanani, this week welcomed two inaugural cruise calls to Gibraltar. 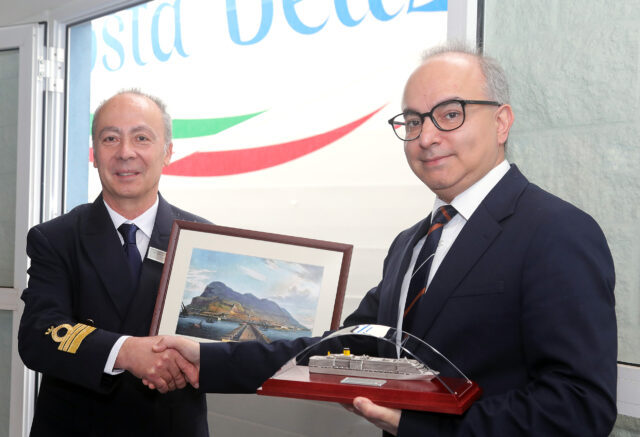 The Le Bougainville and the Costa Deliziosa cruise ships arrived at Gibraltar Port during the morning of Tuesday, April 12 and both departed later on that afternoon.

Costa Deliziosa is owned by Carnival Corperation and operated by Costa Crociere. This vessel has a max capacity of 2,828 passengers across its 12 decks and was today carrying a total of 818 passengers and 856 crew members.

Mr Daryanani engaged in the traditional exchange of plaques ceremony with Captain Giles Thomas from Le Bougainville and with Captain Nicolantonio Palombella from the vessel Costa Delizioza.

“I am absolutely thrilled to welcome these two cruise ships to Gibraltar. It is not often that we have two inaugurals on the same day. The cruising sector has taken a battering but we are now on our way to recovery,” Mr Daryanani said.

“This year we have 184 calls booked, only 13 less to pre-pandemic in 2019. We have done a lot of hard work behind the scenes over the last two years and we will now start our more visible marketing with visits to the most important conferences in Miami, Southampton and Genoa over the next three months.”

“I have had many reports of a busier Main Street and businesses doing better: this is what we all want. The Government is committed to the cruising industry for Gibraltar and I hope to showcase what we have to offer during the year to all the most important cruise executives worldwide as I embark on an unprecedented marketing campaign for this sector”.