Italy has always appealed to the pilgrim and the cultural tourist. Assisi, the small medieval town which beckons to the sightseer in Perugia, combines a strong religious element and an unrivalled artistic heritage. As the birthplace of St Francis, it offers the pilgrim a chance to recall the life of this exemplary person. It also draws thousands of art lovers who want to contemplate the unique collection of frescoes which form a narrative sequence of the life of Francis, a life now encrusted with charming legends and miraculous happenings.

Parking is almost non-existent in Assisi; most of the town is pedestrianized and the streets are narrow and winding. The coach or bus will leave you at the opposite side of the town from where the great basilica is situated so that ideally you would just walk there.

We started our stroll along Via S. Gabriele dell’Addorata until we found ourselves in the Piazza del Comune, where we were struck by the facade of a white church: the tempio di Santa Maria sopra Minverva. The traveller familiar with Rome would be forgiven if she thought the famous Roman church with the same name had been miraculously transposed to Assisi. However, the church in Assisi has a very distinctive feature: it combines classical with Christian characteristics. The original pagan temple, almost certainly dedicated to the goddess Minerva, now houses a church. The facade is a rare blending of six Corinthian columns, architrave and pediment. Attached to this structure, still gleaming white after many centuries, is the belfry of a Christian church.

The guide book claims a tribunal was held inside this building but, more interestingly, that a jail was installed inside and this is confirmed by one of Giotto’s frescoes in the Basilica. The painting in the Upper Church shows Francis giving his mantle to a poor knight. The background consists of the Minerva temple with five columns facing the viewer and two more to the side to create a feeling of depth and perspective. The prison windows are definitely there! 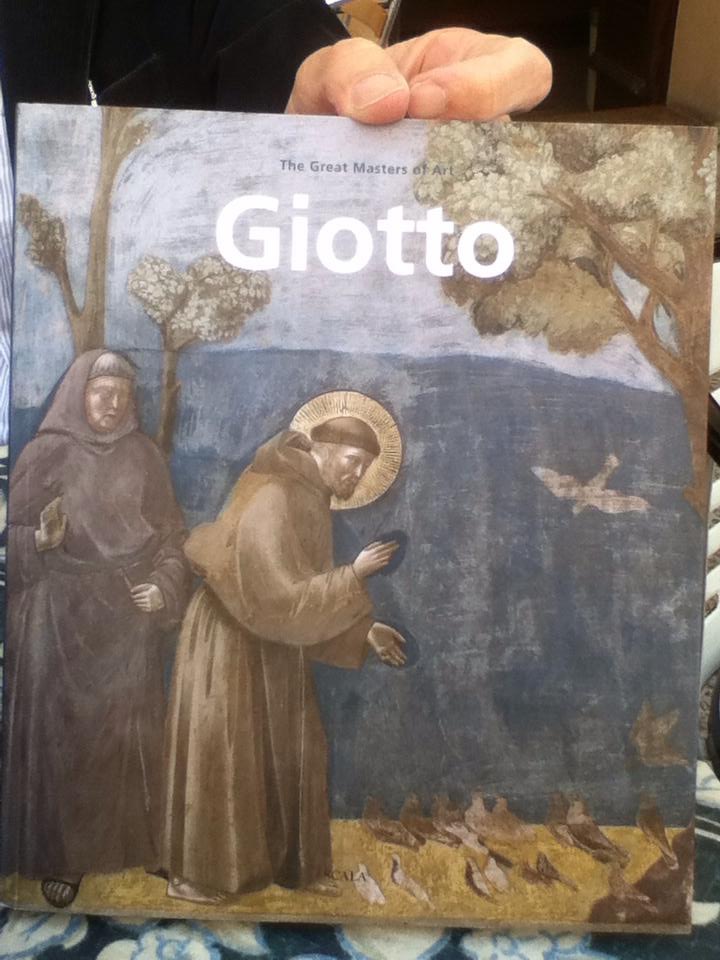 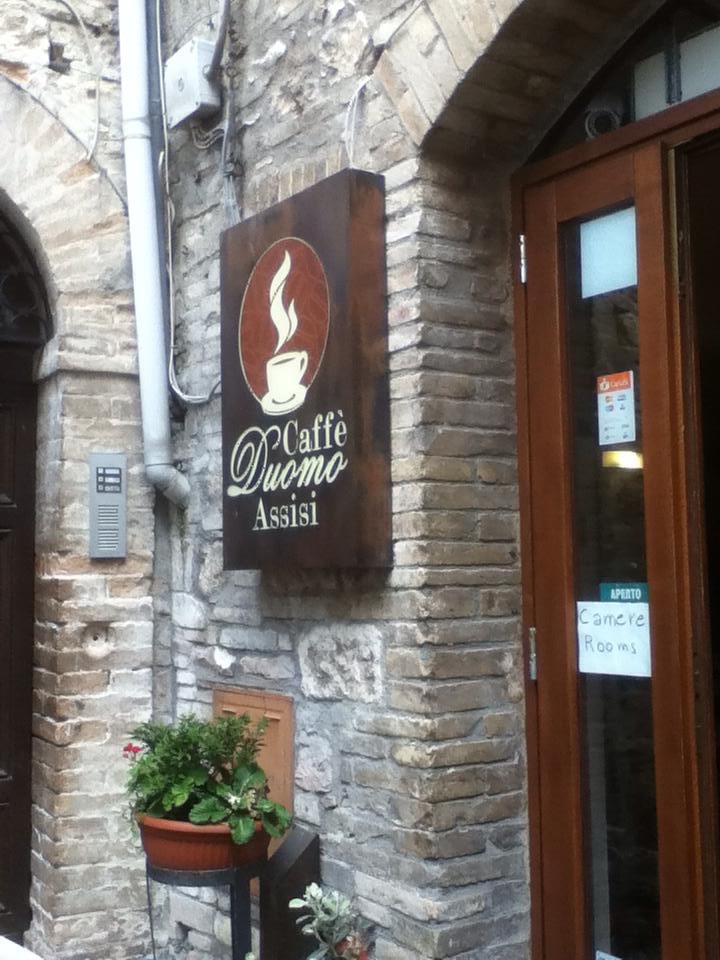 We carried on walking along Via Portica and Via Seminario which led us to Via San Francesco, its name heralding the imminent appearance of the famous basilica.
Along the way we counted around nine churches in Assisi, the largest and most important being the Basilica di San Francesco. This huge temple also has one very peculiar feature: it’s actually two churches in one. It consists of the upper church (basilica superiore) and the lower church (basilica inferiore). Later, over a coffee, we read up about the history of this very grand and impressive church, a prime example of Italian gothic. Building works were started just after 1228, the year of Francis’ canonization and completed in 1253.

The lower church is studded with magnificent frescoes by Giotto and Cimabue. The upper church houses paintings of scenes of the life of Francis previously ascribed to Giotto but now thought to be by other artists. The involvement of Giotto in the whole cycle of frescoes has become a bone of contention among academics, but you can ignore all the kerfuffle and just allow yourself to be absorbed by the pristine beauty, simplicity and innocent quality of the paintings. Francis was very fortunate an artist of the calibre of Giotto decided to depict his wondrous life on the walls of his basilica.

We couldn’t possibly dwell on the paintings individually, but two stand out as epitomising Francis’ life and message: Francis preaching to the birds and Francis receiving the stigmata. The sermon to the birds shows a Francis who has been heralded as the first environmentalist, a man who believed nature was not haunted by demons. The stigmata picture portrays a man familiar with deep suffering but totally selfless in his surrender. 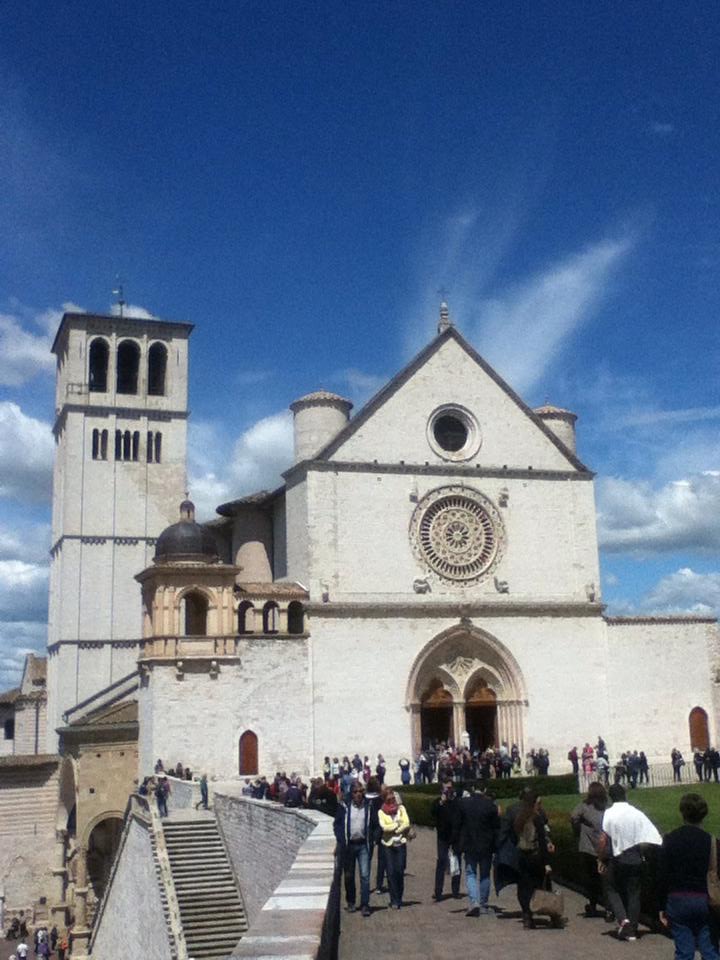 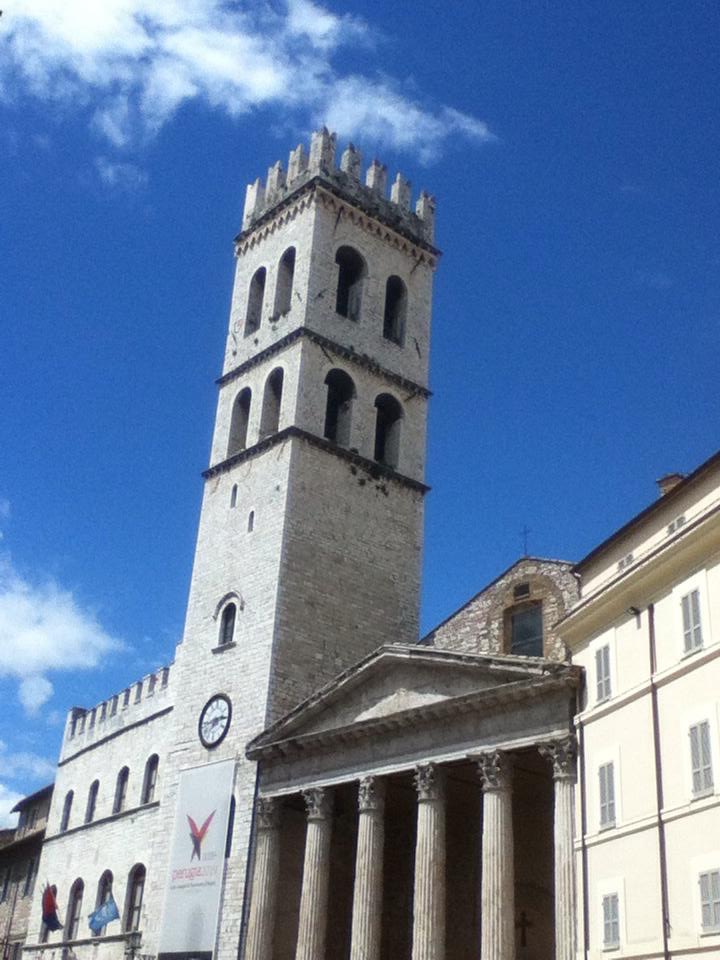 Our tour of both churches was punctuated by a rasping voice calling for ‘silenzio’-not that anyone paid the slightest attention. People were so enthralled and thrilled by the paintings they could not refrain from making some kind of comment.

However, when we descended to the lower church and crypt the silence was enveloping and unbreakable. Here was the tomb of the humble man himself. The sarcophagus is an austere affair of stone and metal-there is nothing gorgeous about it, in keeping with Francis’ teachings on humility and simplicity. However, even in death the poor man was the inadvertent cause of commotion and scandal. During the procession of Francis’ canonization, Elias of Cortona, who had succeeded Francis as head of the Friars Minor, staged an abduction of the saint’s body. He whisked away the coffin and hid it deep in the bowels of the Lower Church. It seems Elias wanted his master to have a more spectacular burial. The body was not rediscovered until 1818!

It’s advisable to go to Assisi after having done some preliminary preparation. There are many modern biographies of Francis, but the primary source is still the life written by Brother Thomas of Celano. It is also advisable to read ‘The Little Flowers of Saint Francis’. This quaint little book contains many of the stories we associate with Francis like his taming of the fierce wolf of Gubbio. But Francis was not just a good man; he was also endowed with a literary gift which is so poignantly expressed in his incandescent Cantico delle creature.

Here we find such expressions as ‘brother sun’ and ‘sister moon’ which have come to symbolise Francis’ deep love of nature. The narrative behind the Giotto and Cimabue frescoes and the many figures which populate the paintings will acquire a deeper meaning and resonance if you go well prepared. The Christian story and that of some of the saints are becoming less familiar so that what was before common knowledge now requires explanation. The frescoes are a veritable feast for the eyes, but they also carry a burden of meaning which only careful research will illuminate.

The Italian poet Gabriele d’Annunzio wrote an eponymous poem dedicated to Assisi. The first line starts with the name of the town: ‘Assisi, nella tua pace profonda’-Assisi, in your profound peace. D’Annunzio must have visited before the era of mass tourism! However, we thought that the peace he talks about could not be shattered by chattering tourists; it is deeply embedded in the very fabric of the town, its churches and art, and it emanates from the man who lived there so inconspicuously many centuries ago.