A view of one of two areas now being used at a warehouse facility in Dover, Kent, for boats used by people thought to be migrants. The boats are stored following being intercepted in The Channel by Border Force as attempts to make the crossing continue. Pic by Gareth Fuller

Dozens of assorted dinghies used by migrants to make the perilous trip across the English Channel are lying in storage in Dover.

Drone pictures show more than 100 small boats piled up in rows in a fenced-off compound – evidence of perhaps thousands of people’s journeys to the UK in 2021.

This year has seen record numbers of migrants crossing to the UK despite vows from the Home Office to make the route “unviable”. 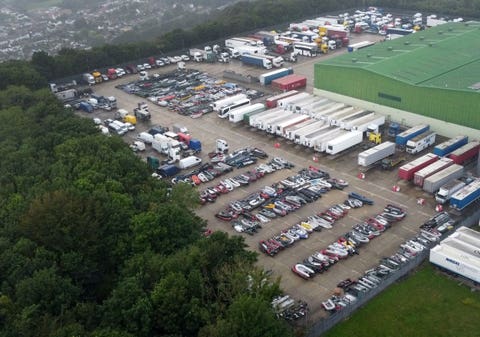 Border Force were active in the Dover Strait again on Tuesday, but higher winds were set to make crossings difficult.

More than 9,000 people have crossed the Channel so far this year on board small boats, despite the dangerous journey claiming lives in the past.

In July so far, more than 3,300 have arrived in the UK in a new record for a single month, according to data analysis by the PA news agency.

Government officials fear that high numbers of crossings will continue as summer goes on, with small boat arrivals this year having already passed the total for the whole of 2020.

Despite this, the UK continues to see fewer boat arrivals and asylum claims than many of its European counterparts.

At least 44,230 people have arrived in Europe via the Mediterranean by land and sea so far this year, according to data from the United Nations High Commissioner for Refugees (UNHCR).

In recent months, law enforcement agencies have noticed the organised gangs behind the English Channel crossings becoming increasingly sophisticated, launching boats from a wider area of the northern French coast.

They will also send out vessels in waves – smaller boats sent out first to tie up the French authorities, while more craft carrying larger numbers of migrants make the crossing later in the day.

Officials have been alarmed by the overcrowding in the vessels – one boat last week had 83 people on board – and the safety conditions.

They have come across inflatable boats held together with duct tape and migrants with rubber rings or bike tyre inner tubes rather than life jackets.

Last week Home Secretary Priti Patel announced an agreement to more than double the number of police patrolling French beaches, with the Government to give France £54 million.

But, while efforts to address the problem have been stepped up by Emmanuel Macron’s government – with around 2,700 people taken back to France so far this year after being intercepted at sea – there is still some frustration in the Home Office about French policies.

The French authorities will not intercept migrants who offer resistance to being rescued, but the UK has a different interpretation of the law.

British offers to help board vessels in French waters have so far been rebuffed by Paris, it is believed.

The Home Secretary told MPs last week that she had made her views on the situation “abundantly clear” to her French counterpart.

The UK is also helping to fund aerial surveillance along the French coast but legal difficulties in France have meant that the drones are not being used as much as had been hoped.

Officials acknowledge there is no silver bullet to tackle the situation, but they have been in contact with counterparts in Australia and Greece to discuss how those countries cope with situations off their coastlines.