Gibraltarian priest Mark Miles was ordained an Archbishop on Sunday in a moving ceremony during which he was commended to work with “an open, generous, steadfast and compassionate heart” in his new role as Apostolic Nuncio to Togo and Benin.

Archbishop Miles was appointed the papal ambassador to the west African countries by Pope Francis, whose mandate was read to the congregation of about 800 people gathered in the Europa Point sports hall, transformed for the occasion with an altar as the focal point for the service.

Archbishop Miles had chosen to be ordained in Gibraltar, where he was born in 1967 and where he commenced his life as a priest in 1996 before entering the Vatican’s diplomatic service, during which time he has held prominent roles including stints as translator for Pope Francis and, most recently, as Permanent Observer of the Holy See to the Organization of American States in Washington. 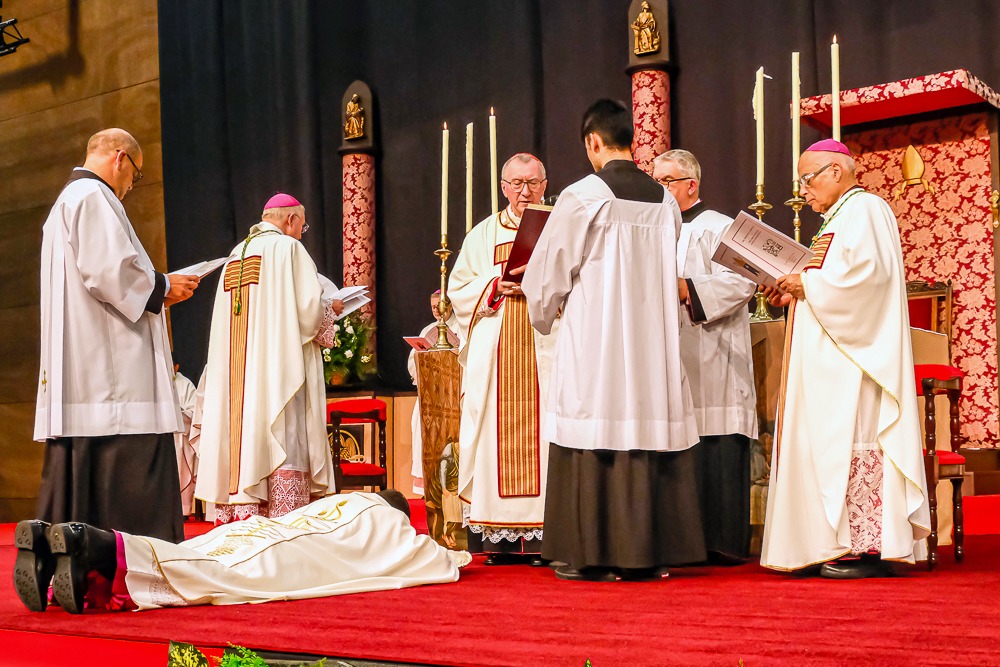 “Though born and raised at the Pillars of Hercules, beyond which the ancients were forbidden to pass, you yourself have frequently done precisely that in your years of service to the Holy See,” Pope Francis said in his letter.

“We readily entrust you now with even greater responsibility by appointing you to the office of Apostolic Nuncio.”

The ordination took place during a mass that coincided with the feast of St Mark the Evangelist and Good Shepherd Sunday, in which the Gospel passage of the Good Shepherd is read during the liturgy.

It was a theme that was threaded through the service and was reflected in a homily by Cardinal Pietro Parolin, the Secretary of State at the Vatican and one of the most senior figures in the Catholic church, in effect Pope Francis’s right-hand man.

Cardinal Parolin, the principal consecrator at the ordination, described it as “a joyful occasion” that demonstrated “the vitality of the Church in Gibraltar.”

Recalling the story of the Good Shepherd, he told Archbishop Miles: “You will not be like the hired hand, who flees before dangers because he is unconcerned for the flock.”

“Nor will you turn into a mere functionary, who puts in his time and then feels free to pursue his own interests and activities.”

“Instead, you will be a shepherd in the image of the Good Shepherd, ready to lay down your life for the sheep.” 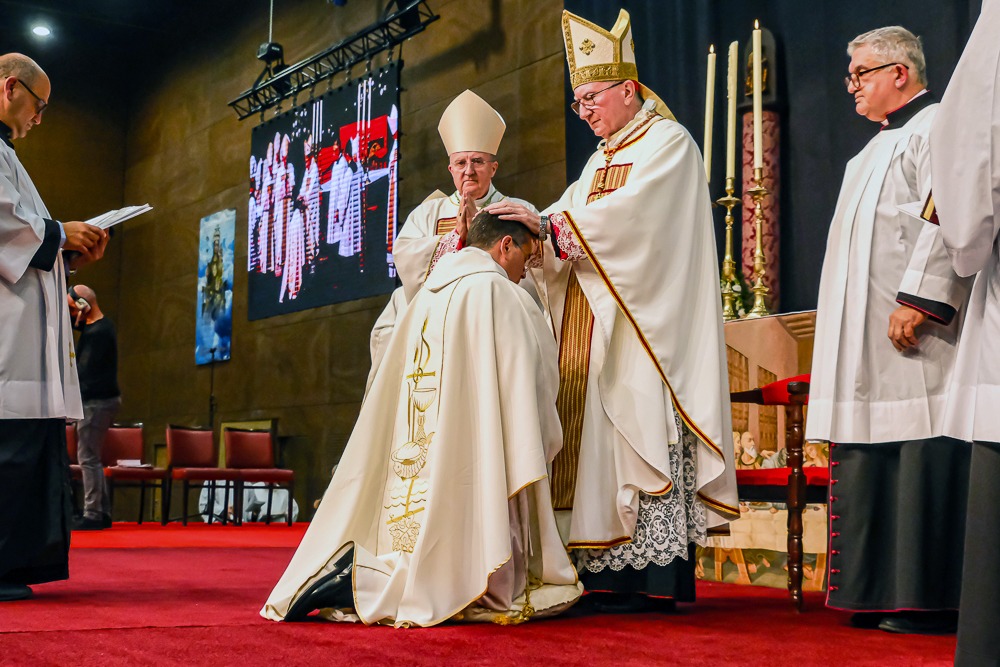 Cardinal Parolin said that in his work as a Vatican diplomat, Archbishop Miles had witnessed the complex challenges facing the Church and society as a whole, and the “great need our world has for truth, for fraternity and for genuine solidarity”.

“As a man of mediation, communion, dialogue and reconciliation, may you always seek to remain impartial and objective, so that all parties can see in the Pope’s representative a just judge who honestly seeks to defend and safeguard justice and peace only,” the Cardinal said, addressing Archbishop Miles before the congregation.

“In this way, in your new mission as Apostolic Nuncio in Benin and Togo, you will more easily lead those you encounter to value the Holy See’s voice and to recognise that it acts exclusively on behalf of the dignity of every human being and for the building of a world in which sentiments of solidarity and fraternal cooperation prevail.”

“By your impartiality and your steadfast commitment to justice and peace, you will also point beyond yourself to the one who inspires your every action and words, namely Jesus, the source of all our joy and the rock of our salvation.” 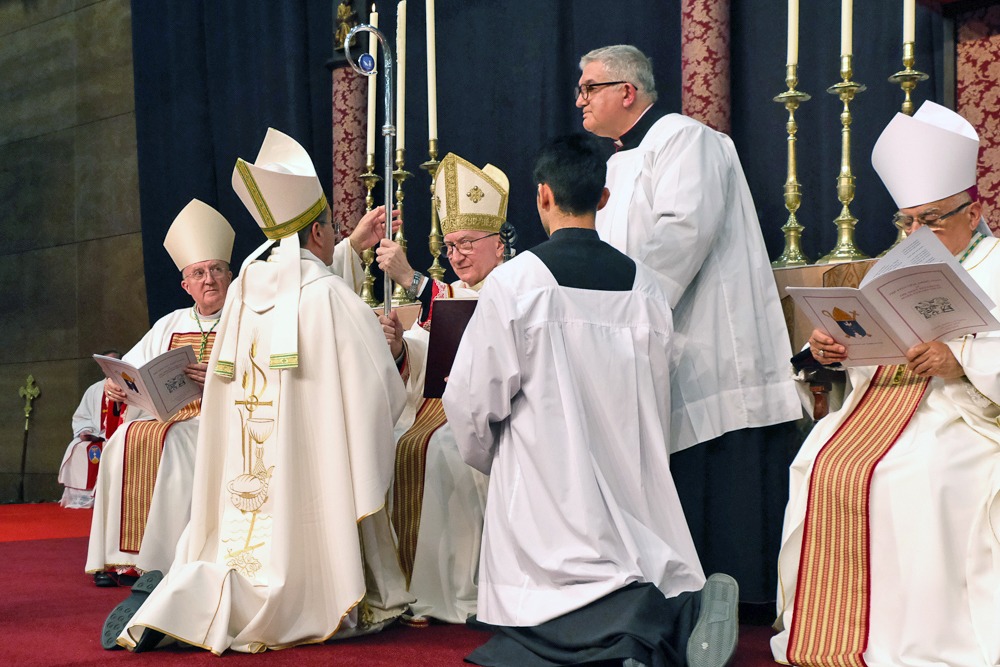 The Cardinal, who led a delegation of VIPs from the Vatican, the UK and Spain to Gibraltar for the occasion, reflected too on the strength of Archbishop Miles’ deep links to the Rock.

“We rejoice to celebrate this day with you here in Gibraltar, where you were born and raised, where you experienced the love of your family and friends, and first learned to know and love the Lord,” he said as he concluded the homily.

“This place has always been close to your heart and it was here that you have chosen to be ordained a bishop.”

“We now entrust you to the loving protection of St Mary, Our Lady of Europe, and Saint Bernard, the patrons of Gibraltar, to St Joseph and to your patron St Mark.”

“To them we commend you and your new mission, as you prepare once more to pass beyond the Pillars of Hercules in the service of Christ and his Church, we accompany you with our affection and prayers.”

The co-consecrators at the ordination were Archbishop Arthur Roche, Secretary of the Congregation for Divine Worship and the Discipline of the Sacraments, and Bishop Carmel Zammit, the Bishop of Gibraltar. 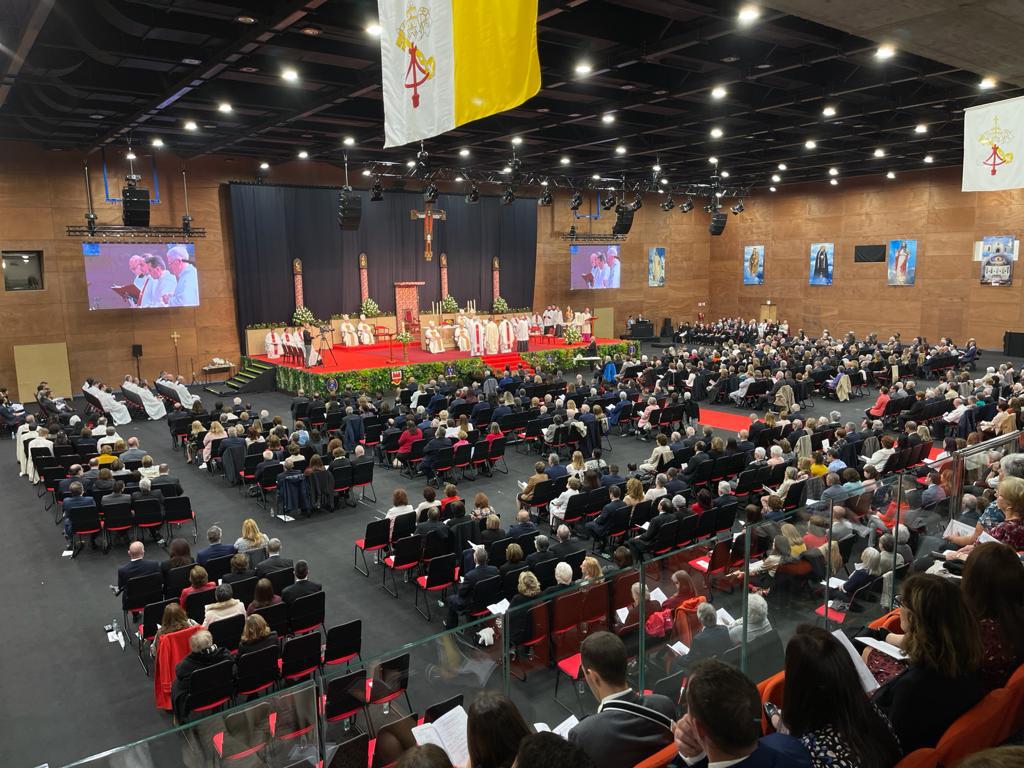 Also present at the service were other priests who had played a role in Archbishop Miles’ life since 1996, including Cardinal Luis Antonio Tagle, Prefect of the Congregation for the Evangelization of Peoples; Archbishop Paul Gallagher, Secretary of the Section for Relations with States of the Secretariat of State; Archbishop Claudio Gugerotti, Apostolic Nuncio to Great Britain; Archbishop Bernardito Auza, Apostolic Nuncio to Madrid; Monsignor Luigi Cona, Assessor of the First Section of the Secretariat of State; Father Paul Murray, Professor of Theology.

In the congregation were family and friends, a broad cross-section of the Catholic community in Gibraltar, and dignitaries including the Governor, Vice Admiral Sir David Steel, the Chief Minister, Fabian Picardo, and the Leader of the Opposition, Keith Azopardi. 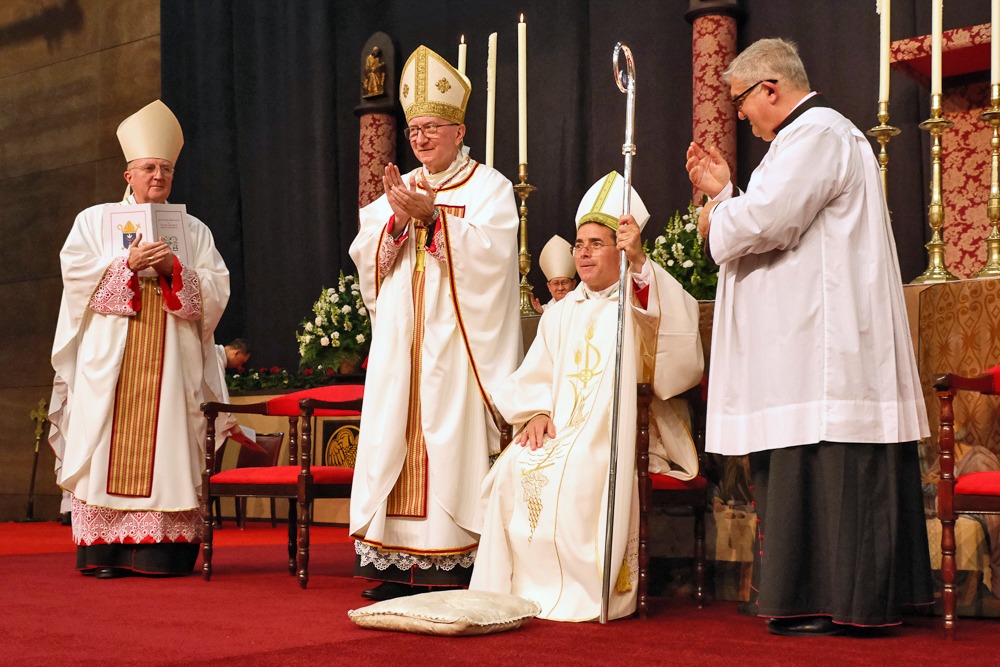 The ordination was a solemn ceremony rooted deeply in Church tradition.

But the warmth of the congregation’s affection for Gibraltar’s Archbishop was evident in the spontaneous applause that erupted as he turned to them, mitre on his head and crozier – the same one used by Bishop Devlin – held firmly in his hand.

Archbishop Miles reflected on this in his words to the congregation at the end of the mass, during which he offered his thanks to all who had played a role in his ordination and appointment as papal ambassador, and to his family and friends for their support during his years of service to the Church.

Clearly emotional and at times fighting back tears, Archbishop Miles spoke about his love for Gibraltar and its people, and had some discrete words too about the forthcoming referendum on abortion.

“My thanks to Gibraltar as a whole,” he said, “for being a People that are warm.”

“They make me proud of saying I’m Gibraltarian.”

“Just as this Rock of Gibraltar reaches upwards and outwards, so too the hearts and generosity of Gibraltarians, qualities we’ve seen during the pandemic shown to the elderly and vulnerable members of our community.”

“And it is with the deepest respect to all who have a different view, that it is also my hope that the sentiments which underpin such generosity, care and concern toward the vulnerable, will continue to be expressed to all stages of human life in our community.” 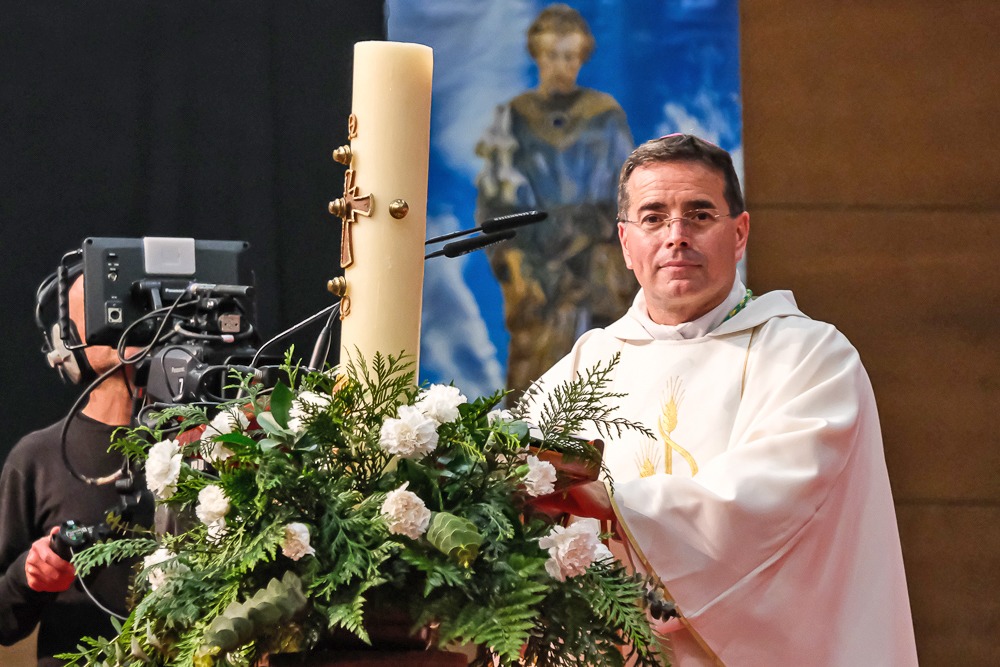 As he heads to his new mission in Benin and Togo – whose bishops sent warm messages of congratulation that were read during the service – there was no doubt that Archbishop Miles will carry Gibraltar with him in his heart.

He reflected on Gibraltar’s religious harmony and how people of different beliefs coexist peacefully here for the good of society as a whole.

“Gibraltar is an example of ecumenical and inter-religious cooperation and I hope that this trend will continue to be strengthened,” he said.

On Monday evening, Archbishop Miles will hold his first mass as Archbishop in the Cathedral of St Mary the Crowned, a service that will be open to the public.

He flies to Benin on May 3 to begin his new mission as the Pope’s ambassador to that country.