by Alice Mascarenhas and Eyleen Gomez

Legendary footballer from the golden era of football on the Rock, Albert Beiso, turned the grand old age of 100 yesterday.

A former fireman, one of the first civilian intakes of the late 1940s, the Gibraltar Fire and Rescue Service deployed to Bishop Canilla House yesterday at 2pm to wish him a Happy Birthday as he watched from his window with his daughter Gladys Beiso-Ryan.

The GFA President also sent him a letter with well wishes from the Rock’s football family. With everyone wanting to pass on their well wishes his home phone rang constantly throughout the day.

The Chronicle was one of those calls and speaking from his home Albert said he was overwhelmed by the outpour of well wishes and congratulations from family, friends and the community at large and was enjoying every moment of his special day. 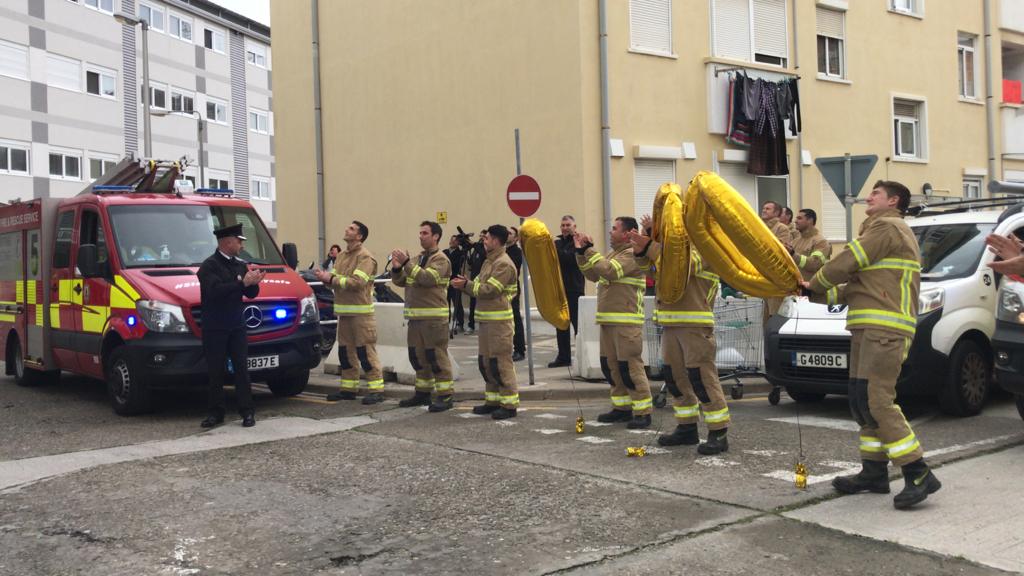 “I am crying all the time – I am a crier but this is just amazing, the many number of people who have remembered my birthday,” he said.

Although strictly keeping to the rules of isolation his daughter was the only person able to be with him so he could have his birthday cake.

“I am so surprised about all this,” he said.

“Especially the firefighters, I left the brigade in 1970, I don’t know any of them now, but they still remember me.”

“But so many people have called, and I am again really surprised that you and so many others have remembered to wish me well.”

“My message to everyone is thank you. Stay at home and like me keep smiling. Remember things will always get better,” he said. 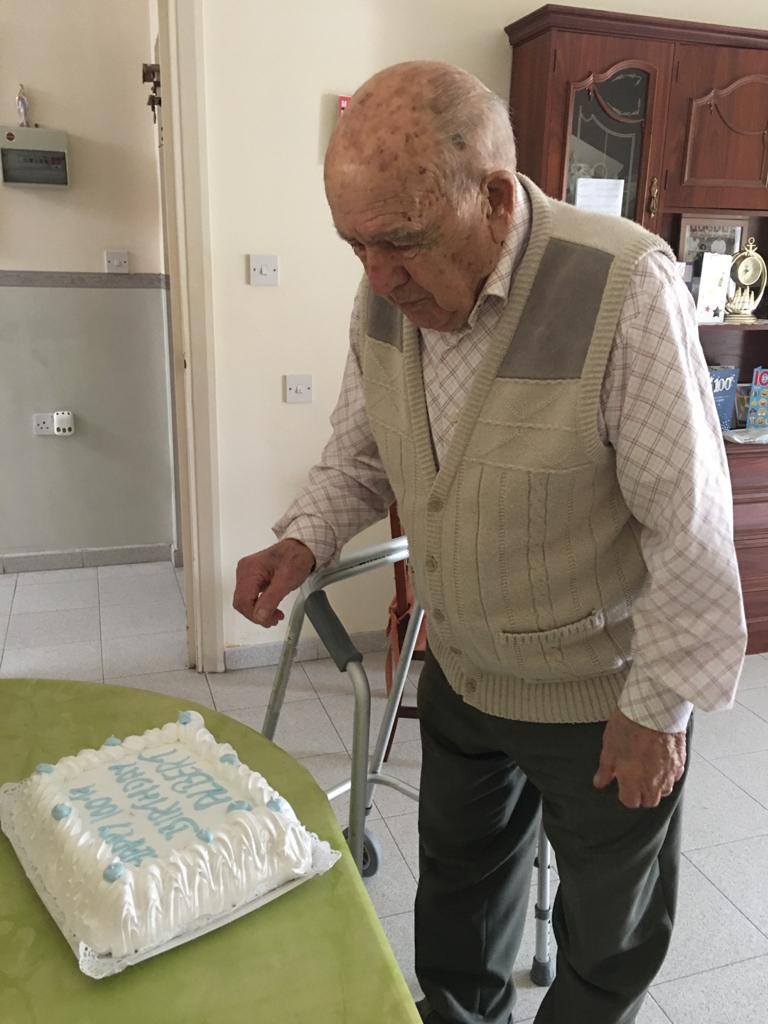 At 2pm exactly, members of the Gibraltar Fire and Rescue Service turned up with three fire engines and three balloons making up the number 100.

The emotional scene saw the firemen salute their former colleague as they applauded him from the street below singing Happy Birthday to be followed by clapping, whistles and cheers.

Others joined from their windows and other family members had timed their daily walk to be there and join in.

Also involved and present at 2pm was Deputy Chief Fire Officer, Matthew Payas, whose grandfather had worked with Beiso in the then City Fire Brigade.

As they could not have a coffee or cake with him, Mr Payas called to him from below, they would sing him Happy Birthday.

As they all joined in the lively birthday sing-a-long this was followed by three cheers and the sirens from their engines sounding. 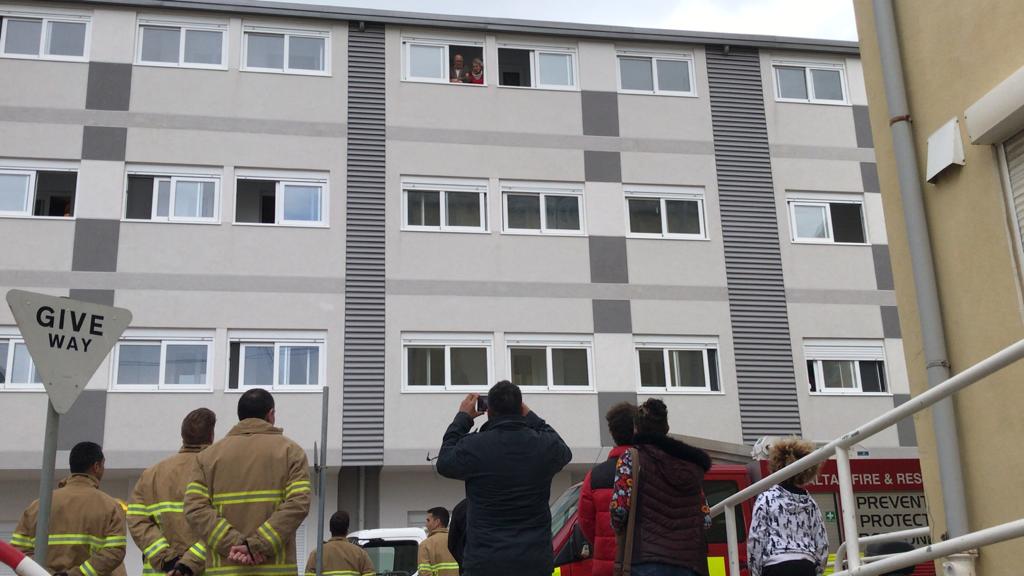 “Albert is my Great-Uncle and everyone has always known him as ‘Besio del football’ but few people knew he was a fireman. Everyone who knew him spoke of him as being humble and never taking credit for anything he did including being one of the people who built our training tower,” said Mr Abudarham.

Chief Fire Officer, Colin Ramirez, said Beiso had formed part of the unit in the early days and had served the community for many years and it felt right to also recognise his contribution.

“The word community has a lot more importance today because of what we are going through – people now more than ever need stories to inspire them and Albert Beiso was and is an inspiration to us all,” said Mr Ramirez.

“It is a very moving story to be 100, but especially now in these difficult days – this is an important and cheerful story in times of great tension and all we are currently going through in this community.”

Mrs Beiso-Ryan who was able to spend some time him on the day by taking extra care described it as a very emotional day.

“I am very emotional and feel very overwhelmed and blessed to have so much love and support from everybody – my family, friends and the community at large,” she said.

“My father has always been a very popular person – but what happened yesterday goes beyond anything I could have ever imagined. In these difficult times of turmoil, that people are still thinking about him is incredible.” 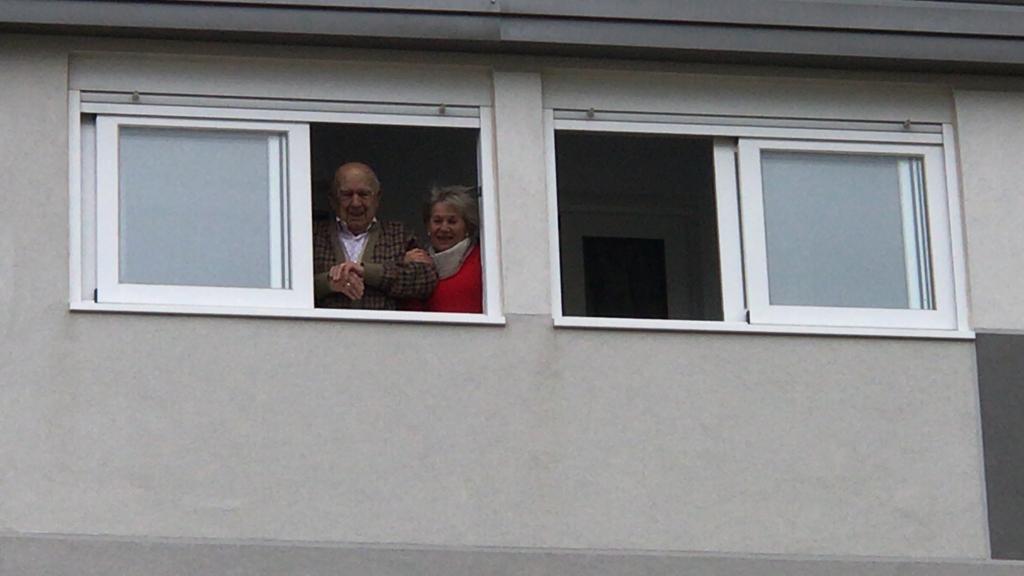 She had been planning for family and friends to visit him throughout the day to make his special day a whole day of celebration.

“I was planning - an open house - so people could come and in and out and he could have a full day of visitors. Of course, this has not been possible but people have gone out of their way to call him and celebrate with him and I am grateful to everyone,” she added.

And the football community did not forget Beiso’s special day either as early on the day he received a letter of congratulations from Gibraltar Football Association President Michael Llamas.

In the letter Mr Llamas wrote: “Well done! It is astonishing that, in the same year as the Gibraltar Football Association celebrates its 125th anniversary, you are celebrating your 100th year. Your life, your career as one of the best football players ever to grace the Gibraltar shirt, is intrinsically linked to the history of the GFA.

When people of different generations talk about Gibraltarian football, they always mention the name Albert Beiso. Albert, on behalf of all of us at the GFA, I wish you the very happiest of birthdays.”

Dennis Beiso, GFA Director of Strategy, said they had also printed a football shirt with ‘Beiso 100’ which would now be presented once this was all over.

“He is widely regarded as one of the best football players that Gibraltar has ever produced. Albert deserves the accolades and acclaims. He was a great footballer and is a fantastic person. Happy Birthday Albert.”