Entry into Gibraltar under the political framework agreement reached on New Year’s Eve will be “exclusively a matter for us”, Chief Minister Fabian Picardo has told the Chronicle.

Mr Picardo said Schengen checks by Frontex officers would be conducted “only once entry into Gibraltar has been granted” by BCA officers, while acknowledging Schengen checks would be “a purely European matter”.

Mr Picardo stressed Spanish law enforcement officers would not be present “at the port or airport”, adding Spain will guarantee its Schengen obligations “remotely”.

Mr Picardo was speaking after Spain’s Minister for Foreign Affairs, Arancha Gonzalez Laya, told El Pais in an interview that Spain would have “the last say” over who could enter Gibraltar.

The political agreement reached on New Year’s Eve paves the way for a UK/EU Treaty seeking "maximised unrestricted mobility" of persons and goods across Gibraltar’s border with Spain, avoiding a damaging hard Brexit for the Rock at midnight on New Year's Eve.

But the Gibraltar Government has repeatedly said the agreement does not breach Gibraltar's red lines on sovereignty, jurisdiction or control, and will allow Gibraltar to "reset" its relationship with Spain in a more positive light.

Under the agreement, Gibraltar’s closest Schengen member state, Spain, will take responsibility for ensuring Schengen checks are applied in Gibraltar.

But Mr Picardo said Gibraltar law would apply to anyone stopped entering or leaving the Rock.

He added that even in the four-year initial period envisaged by the agreement, Gibraltar “will not accept” Spanish law enforcement officials wearing an arm band as the Frontex force.

Mr Picardo said the agreement would strengthen security in Gibraltar by ensuring checks could be carried out against not just UK and Interpol databases, but EU ones too.

And he insisted too that after the four-year initial period, the UK and Gibraltar would have a veto on Spanish law enforcement ever coming into the terminal to carry out the checks themselves.

“We can, if necessary, terminate the agreement,” he added.

The Chief Minister said the political agreement meant Gibraltar had avoided the worst impacts of a hard Brexit at the border.

“We have avoided the UK having a deal and our being the only part of the continent of Europe without a legal relationship with the EU,” he said.

“We are hoping to cure decades of mobility issues and to deprive a future right wing Spanish government of the whip hand on the queues.”

Below is the full text of the interview with the Chief Minister, conducted on Saturday January 2: 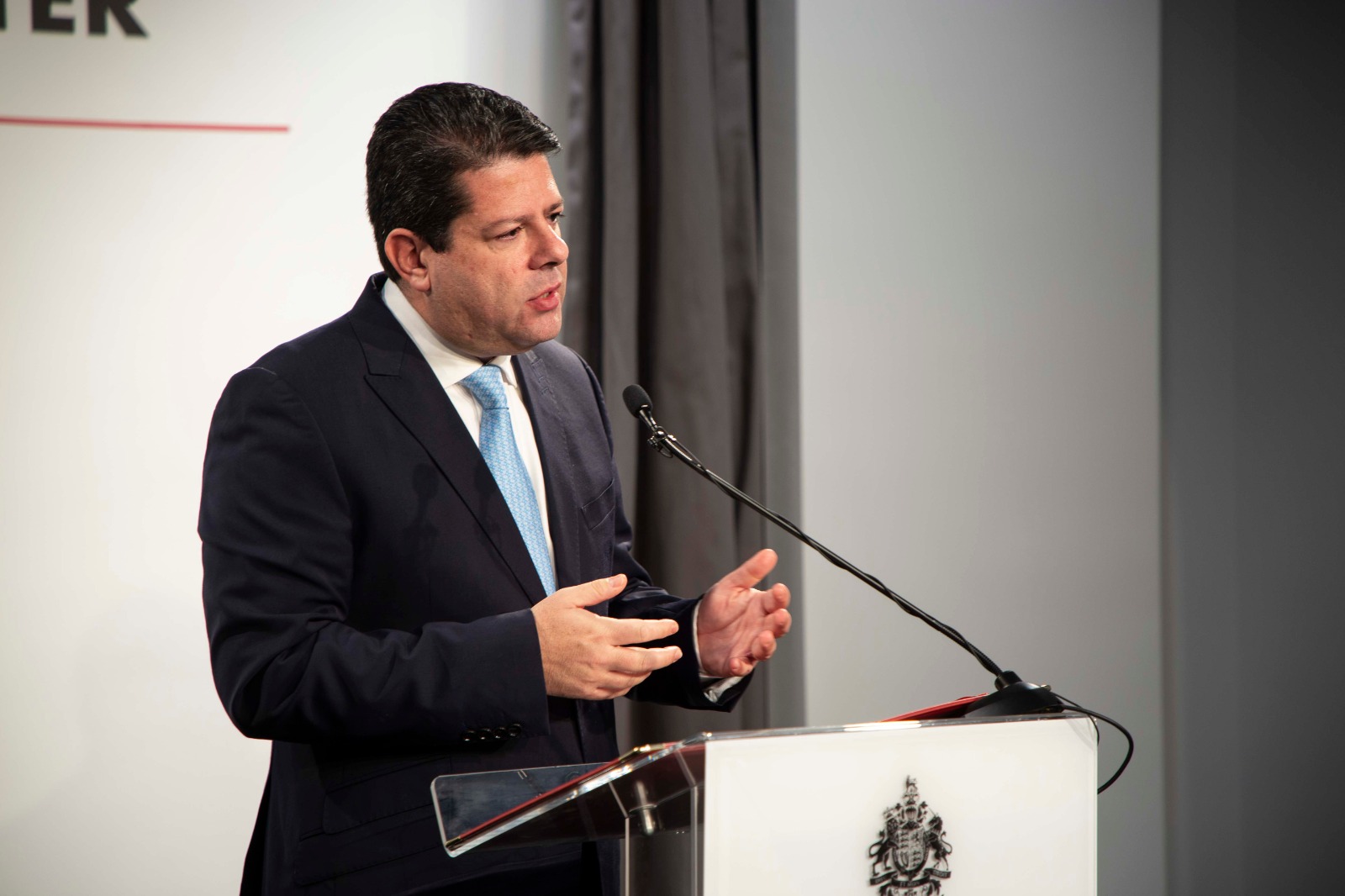 Q. Arancha Gonzalez Laya said in an interview on Saturday that Spain will be responsible for who can enter the Schengen area through Gibraltar, that Spain “will have the last say”. What is your understanding of what she means by this?

A. The New Year's Eve Agreement expressly provides that only Gibraltar will decide who is able to enter Gibraltar. Those decisions will be made exclusively by the Gibraltar Borders and Coastguard Agency [BCA] in keeping with Gibraltar immigration policy and the data available to them from our / UK security databases. Only once entry into Gibraltar has been granted by Gibraltar by the BCA, then entry into the Schengen area will be determined by Frontex officers who will be connected to the European Schengen Information System which will be remotely provided to the Frontex officers by Spain. To be clear though, Spanish law enforcement will not be at the port or airport.

Q. If Spain is responsible for application of Schengen checks in Gibraltar, how is this not ceding a degree of control? How is this acceptable?

A. The Schengen checks are related to the European Schengen Information System. Access through the Gibraltar frontier will be exclusively a matter for us. Access to Schengen is a purely European matter. Spain is a member state of Schengen. The choice really is whether you face those controls in the form of a Spanish officer at the land frontier with Spain or in the form of a Frontex officer at the port and airport, with Spain remotely providing the data to the Frontex officers. But let us be clear, the database is not a Spanish database, it is a European database which Spain feeds information into and can access, but Spain does not control the database.

Q. In practical terms, how will Spain exercise that responsibility under Schengen?

A. The answer is it will do so remotely. They will be providing access to the data base remotely to the Frontex officers.

Q. Whose laws will apply to anyone detained at the Schengen entry point in Gibraltar for whatever reason? How will that work in practice?

A. The only law and jurisdiction which will apply to anyone detained in Gibraltar will be Gibraltar law. Practical details will be set out in the Shared Prosperity Treaty we are going to start hammering out now.

Q. What commitments have been secured as to the nationality of the Frontex officers who will conduct Schengen checks in Gibraltar under the initial four-year period?

A. I have said repeatedly in Parliament that we will not accept Spanish law enforcement officials wearing an arm band as the Frontex force. We are referring to the Frontex Statutory Corps. The proportions of recruitment of those between the nationalities of the nations that make up Frontex are set out in the EU Regulation that establishes the Statutory Corps.

Q. Spell out what has been agreed in respect of who handles the Schengen role after four years are up. What safeguards are in place, given that Mrs Gonzalez Laya has stated explicitly that after four years, Spain’s expectation is that Frontex officers will become Spanish officers?

A. After four years, we will consult on what should happen next on the ground at the port and airport. I believe that Spain will in that period have grown in confidence and consider that it should be just our Gibraltar Borders and Coastguard agents who are the ones carrying out a consolidated Gibraltar and Schengen check. Our BCA officers would thus be able to apply the effect of our/UK databases and the information remotely provided to them by Spain in respect of the Schengen Information System.

If we cannot agree that or another acceptable system, the UK and Gibraltar have a veto on Spanish law enforcement ever coming into the terminal to carry out the checks themselves. We can, if necessary, terminate the agreement.

Q. What is being discussed in terms of mobility of goods and joining the Customs union? What would be the effect in Gibraltar?

A. This discussion is at an early stage. The Cabinet considered this carefully and we agreed we could have an arrangement with the Customs Union which was not membership of it but an agreement that could lead to the suppression of controls. This still requires discussion and negotiation and we may be able to suppress controls with a lighter agreement on the movement of goods than an adherence to the Customs Union. The views of the EU Commission on this, as the guardian of the Treaties, will be very important and I look forward to the discussion in coming weeks.

Q. In terms of the treaty text, is that a process that is already underway? How advanced is it? When will the public have sight of the detail of what has been agreed?

A. The drafting of the Shared Prosperity Treaty has not yet begun as we have not yet met for that purpose. The Gibraltar side has already been drafting what we think it looks like based on the discussion for the New Year's Eve Agreement. As ever, such a Treaty will be published once it is agreed.

Q. If we take a step back and look at this agreement broadly, what has been achieved? What does this mean for Gibraltar? Where has Gibraltar had to bend in order to achieve this?

A. Gibraltar has avoided a hard Brexit. We have avoided the UK having a deal and our being the only part of the Continent of Europe without a legal relationship with the EU. We are hoping to cure decades of mobility issues and to deprive a future right wing Spanish government of the whip hand on the queues. We have not ceded one iota of sovereignty, jurisdiction or control. We have, in some ways that will become apparent, cemented our position. For now, I must not say more, as I must make a statement in Parliament and we must yet negotiate the Treaty. Prudently, we will get there and achieve a final deal which will best be described as follows: "Sovereignty Safe, Prosperity Protected, Mobility Assured". But that is a long way off yet. There is still a lot to do and a Treaty to finalise. We may not get there in the end if there is any attempt to compromise the things that matter to us, but I am hopeful that we will.

EDITOR'S NOTE: Our reporters are working round-the-clock to bring you the latest news on Gibraltar and the Covid-19 crisis and Brexit. Our key coverage on these critical issues is available free outside the paywall. If you find it useful, please help us reach more people by sharing our journalism. And if you want to support our work further, please consider subscribing to the digital version of our daily newspaper and all our premium online content. You can subscribe via our website or for iOS devices via the iTunes store. Thank you.