A £1m revised outline planning application has been filed for a small rural hotel at Lewis Battery in the Upper Rock Nature Reserve, with the Environmental Safety Group (ESG) voicing its objection to the new plans.

The applicant is seeking permission to build a small scale hotel with reception, visitor’s centre, dining hall and multiple terraces that would provide a “unique experience of accommodating a small number of guests deep within the heart of the Gibraltar’s Upper Rock area.”

Last October the original outline planning application was discussed for the former pig and poultry farm at a virtual meeting of the Development and Planning Commission (DPC).

The points of concern raised by the DPC members resulted in the revised design.

According to the new application, the roof has been changed from a pitch roof to a flat one, with the aim of replicating the lost open space at ground level. The colour scheme has been modified to include greener tones thereby having the building blend into the surrounding trees and plants.

In a bid to break up the continuous lines from the development a green wall of creeper plants will be placed on either side of the central block.

“This creates an effect of having two independent buildings rather than a single ‘longer’ massing,” said the revised design statement filed.

Despite the changes taken onboard by the developer since the DPC meeting, on which a member of the ESG sits, the environmental safety group are holding their objection to the project as they did so in October last year. 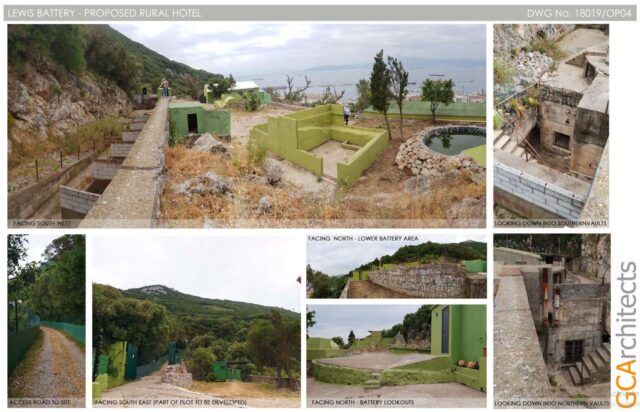 The group is urging the public to file objections before the deadline of September 16, 2021.

During the DPC meeting in October 2020 an objector said they were against the project due to the loss of habitat, increase of noise and light pollution, increase in traffic to the area and he was concerned it would set a precedent.

The ESG agreed with this objector, as did the Department of Environment and the Town Planner. Outlining the various clauses within the Gibraltar Development Plan and ecological reasons as to why.

“The ESG fully concurred with their advice believing we have sacred remaining pockets of habitat in our Reserve. Which must not only be preserved, but, in light of climate change, enhanced and expanded wherever possible,” said a statement from the group.

“This was the key point we raised at the DPC meeting. That, rather than build and develop a brown site of past human activity, in an otherwise rich, green and protected environment, that the correct action would be to re-landscape and reforest this site. Especially given the habitat loss suffered recently with the Old Casino Site, expansion of the top station and other excavation works related to development in areas near or buffering our Reserve.”

“The ESG is firmly opposed to commercial development of this type in our Nature Reserve that will see increased disturbance to our wildlife and believes many in our community share these views,” the statement added.

The application is available for viewing on the Government’s egov website.