The works of nine local artists who formed part of the ‘Gibraltar Our Sacred Earth, Our Sense of Place’ exhibition in Bermondsey, London are currently being exhibited in Gibraltar.

The artworks can be found in the vaults of the GEMA Gallery, in Montagu Bastion, and the works focus on the theme of Gibraltar.

The exhibition was first launched in London in early September with the aim being to export local talent, explore opportunities and network.

“It brought together artists of different ages and backgrounds all with different styles and ideas,” she said.

“I was thrilled to have my two works exhibited in London especially given the theme, but it feels extra special to have a piece now on show at GEMA.”

She exhibited two pieces, 'From Memory' and 'Holding on' which was her response to the theme and created for the exhibition.

“Both are based on memories linking my past with the present, not just narratives for sense of place but also a sense of belonging. Although quite personal I wanted to create something familiar and that others might identify with,” she said.

She added: “Extending the exhibition to GEMA is a great initiative giving everyone the opportunity to see the works from an exhibition with special meaning.”

Unfortunately, due to work and family commitments Sebastian Rodriguez could not attend the exhibition in London.

“I feel it is a great opportunity for Gibraltarians to exhibit in London and would like to thank Phillipa Beale and the Ministry of Culture for facilitating this. Equally, it is great to be able to share the same exhibition for everyone in Gibraltar to enjoy,” he said.

“It’s great to see the exhibition now on home soil. I particularly like the GEMA Gallery space.”

He created a collection of plein air paintings specifically for the exhibition, rather than selecting existing works.

“With the theme being ‘our sacred Gibraltar, a sense of space’ I wanted to convey a broad spectrum of local places that convey this,” he said.

“Places like Sacred Heart are more typically in line with the title, though I find Trafalgar Cemetery, The Dockyard and the Frontier just as fitting.”

“Trafalgar Cemetery has long been a place of personal respite as my place of work (Face Frames Gallery) is very nearby and I enjoy the sense of calm it provides.”

“As for the Dockyard, in terms of a sense of space, I have ways felt a childlike fascination for the empty dry dock. It is an open industrial space which is at odds with the rest of Gibraltar.”

“Also, though not sacred in the religious sense, for a long time it was the beating heart of Gibraltar's economy and so holds a special place for our community.”

“Finally, I chose the Frontier. Not only does it demarcate our space, but it is also a place all too familiar where Gibraltarians have to queue up and exercise patience.” 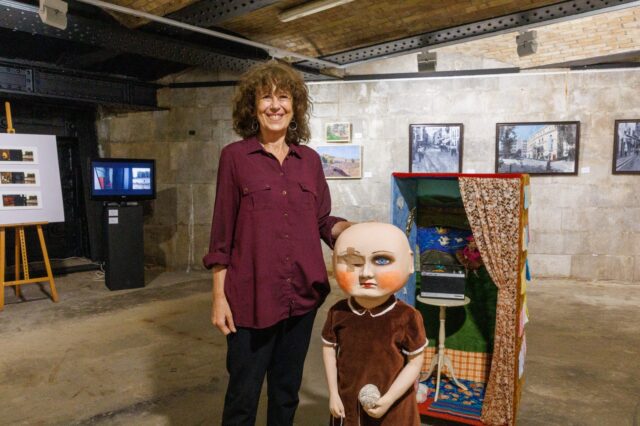 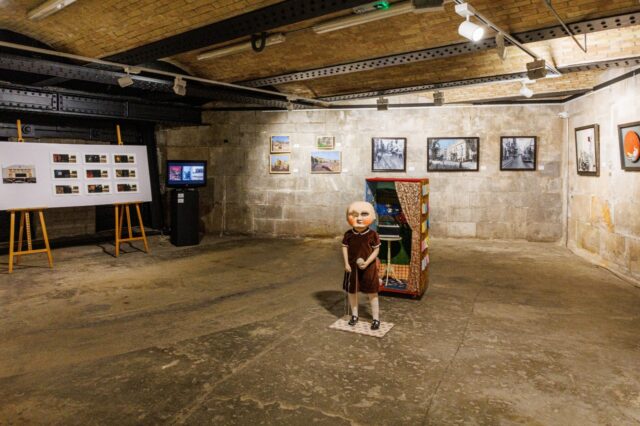 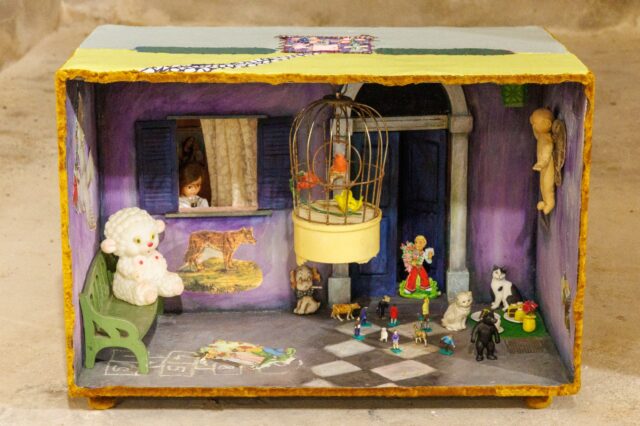 Shane Dalmedo said it was really exciting have her works exhibited in London and collaborate with other artists.

“It was important because we were all producing work for sort of the same sentiments and it was great to be there all together in a different perspective to see us all together instead of here, with the work there that represents here. So, it was it was really interesting,” she said.

It was not her first time exhibiting in Bermondsey and this time it was just two pieces.

Explaining her piece, she said: “The story is that she is supposed to be away from home. So, it is a bit different and now she is here the story is of a different narrative.”

“So now she's maybe this is where she is supposed to be her.”

Her other piece is a street scene piece with the typical doors seen in the older parts of Gibraltar together with shutters, a colourful piece that perhaps depicts the colourful life of the residents behind its doors.
Monica Popham also believed that the London exhibition was a success.

“It was lovely to meet other Gibraltarians who were based in the UK, and I suspect it was lovely for them too to have a bit of home away from home,” she said.

She added: “Originally the series was made up of 12 paintings, but I had sold a few in London so I decided to put up six as the two rows of two completed the size and subject of the paintings.”

Karl Ullger said the exhibition in Bermondsey was “very special.”

"Having a group show with eight fellow Gibraltarian artists was a very proud moment. Everyone offering a different slice of what Gibraltar is,” he said.

“Having the exhibition tour now back into Gibraltar at the GEMA gallery allows locals to view the work on home soil and is a great opportunity once again to promote Gibraltar art for any art loving tourists who may wander into the gallery.”

“Having my five paintings displayed in London for a month was a fantastic opportunity and for this I must thank not only the GCS team but Phillipa Beale for selecting me as one of her artists.”

Mr Ullger has worked with Ms Beale previously in 2018 and called her “an absolute professional and excellent artist in her own respect as well as curator.”

“The five pieces that got selected were all very strategically chosen by curator Phillipa Beale, UK renowned artist Matthew Collings and obviously my personal input.”

“The five paintings have clear visual and philosophical links to Gibraltar; from the towering Glacis Estate to the corner bins at St Johnstone’s passage famous for its fly-tipping and our beautiful secret patios.”

“The good, the bad and the ugly you could say that shadows and features in all our societies wherever you may be from. But at the end of the story, we are all proud of where we come from.” 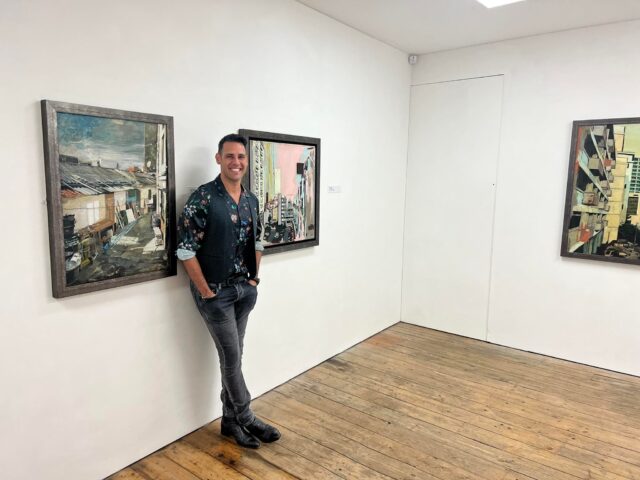 Mr Ullger called the overall two events a success because the more artists can expose their work, whether Gibraltar based or not, is good for Gibraltar’s culture and society.

“It is all about putting Gibraltar more and more on the map and especially with the abundance of culture talent we have in such as small place. Music, drama, authors, artists etc. the more events that are arranged can only be good for individuals and genres alike,” he said.

Naomi Duarte could not attend the opening of the exhibition in Bermondsey but was proud about being selected “among the incredible amount of talent”.

“I’m so grateful still, so seeing the exhibit on home soil really extends those feelings humbly,” she said.

“These initiatives are vital in supporting artists and it has been executed beautifully both in London and here. Because most importantly, locals can also be a part of this wonderful exhibition about our home.” 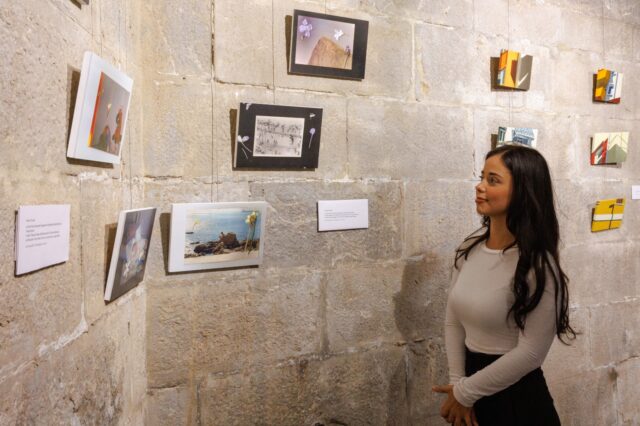 The process of selecting her work was a tumultuous one she said due to a combination of logistics and personal pressure, but she always had an idea of what she wanted to show.

“Specifics changed and adapted with the meeting of Matthew Collings which was an absolute treasure. His insights were gold and really nourished artistic growth in me,” she said.

“Reflecting back, I think I would’ve exhibited differently but I reckon that’s just development and exploration talking after a few months of selection.”

“My practice is very varied so I’m constantly working on new art which would work well in a gallery space should I be fortunate enough to get chosen again.”

She also noted that any event that is created in relation to art and culture, be it exposed locally or abroad is triumphant, no matter the reception.

“That is, as long as it is founded and executed with good values which of course happens every time with GCS,” she said.

“I understand that the true “success” falls in exhibitions being a kind of gift - for the artists and public to share and receive interchangeably.”

“Furthermore, it extends personally, with every exhibition my confidence and knowledge grows.”

“So, I think that yes they’re a success, even the events I’m not featured in because fundamentally, in the end, art flourishes.”

Alan Perez said it was great to have different artistic disciplines in the same room and viewing their unique responses to the brief.

He added it was great to see Gibraltar portrayed in different perspectives, and the exhibition was important for Gibraltarian art.

Mr Perez said bringing the exhibition back home was an opportunity to show Gibraltarians what they were working on and the response has been largely positive. 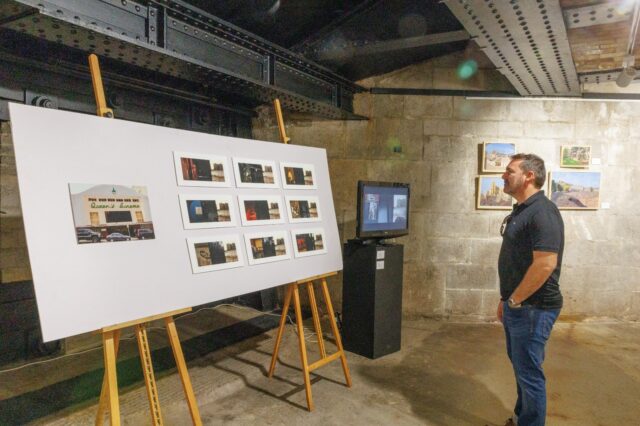 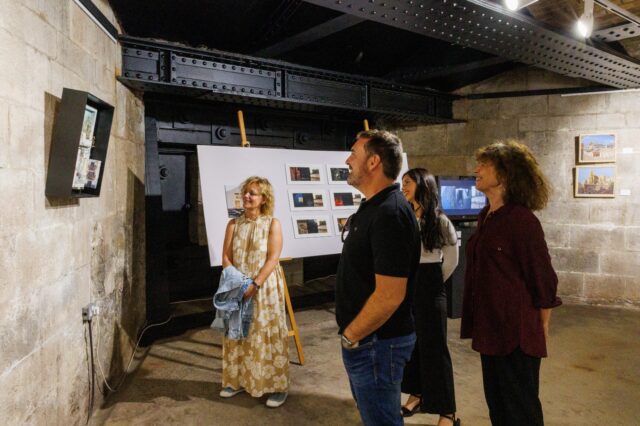 His piece, 'Queen's Cinema', came from an idea which struck him a few years ago, having visited the site before it was demolished.

He later videoed the car park which is now there in its place, and contemplated "culture versus progress" and profit.

"It was a place you used to go on Saturday's when you were younger, it was a place maybe where you had your first kiss, it was a place where people of all ages during the closed frontier escaped from reality," he said.
He said the collaboration with Stephane Dominicy and his music was vital to the piece.

Mr Perez added the exhibition was a success as a stepping stone for future projects.