“Words cannot express the joy we feel today”, said the chairman of GHITA, Edgar Triay, following news that the Gibraltar Government plans to make British Sign Language an official language on the Rock.

“We are eternally grateful to all involved. This decision will benefit existing and future generations of deaf BSL users,” he added.

He also noted that the charity was honoured to have worked with David Buxton, Chair of the British Deaf Association, and the whole BSL Act Now! Campaign team to push for this change and increase awareness.

“Our grateful thanks to them all for support and advice for our own BSL Act campaign,” he said.

Mr Buxton congratulated Mr Triay and GHITA, noting he was glad to have helped them with their campaigning for a number of years.

Gibraltar is the first country of the fourteen British Overseas Territories to introduce a new BSL Bill.

Mr Triay highlighted the impact of the rally held by GHITA on March 18 outside No.6 Convent Place lobbying for the change in law. The event mirrored exactly what was happening in Trafalgar Square, where thousands of deaf people gathered.

“I would like to take this opportunity to also thank Elliott Phillips and the GSD for filing the motion to recognise BSL and its provisioning back in February 2022 and to everyone who supported and attended our BSL Rally, with special mention to our fellow members from the Gibraltar Disability Rights Federation,” said Mr Triay.

“The Chief Minister has swiftly published a BSL Bill, which is a great step forward and is quite like the UK Parliament’s own BSL Bill. For this we are forever thankful.”

“We will continue to press the Chief Minister to set up a BSL Advisory Group to advise the Minister for Equality on implementing the future BSL Act,” he added.

The reaction to the news caught a lot of attention from various organisations or entities outside of Gibraltar.

Gill Earl from Signcode UK stated it was fantastic news and congratulated the Government for acknowledging that BSL was a language and deciding to make it official.

Craig Crowley from Action Deafness in the UK also congratulated GHITA and the Government for its work and the former chair of the British Deaf Association Jeff McWhinney twitted, “Brilliant news, Gibraltar's going to recognise BSL as an official language in Gibraltar, more powerful than our BSL bill as it covers more than just the Government.”

GHITA has been campaigning on the Rock for many years and Mr Triay credits social media for moving things faster today than back in 2008.

“The more GHITA has increased its presence and networked with other organisations and experts, the more we have learned and the more awareness we have raised,” he said. 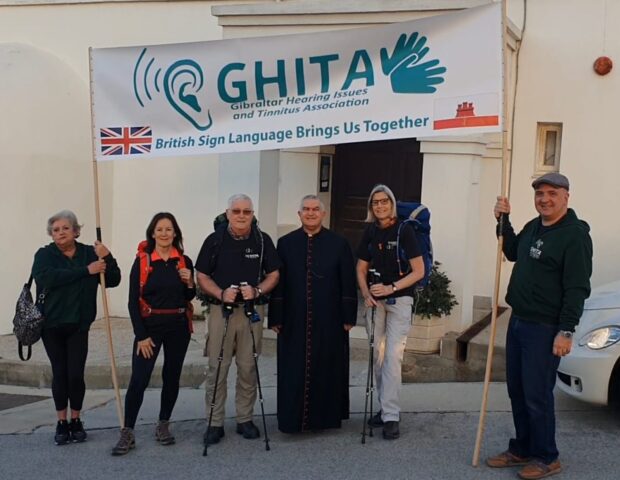 The news of the Bill came on the same weekend that couple Robert and Ana Maria Gomez left Gibraltar to commence their 1,000 mile walk in a bid to raise funds for GHITA.

To support them, donate via https://www.justgiving.com/crowdfunding/longwalkfromgib

To support GHITA directly you can do so via dialling 8980 from any Gibtelecom landline and mobile number.