Friend of the Sea has recently launched a new worldwide campaign where it is asking the shipping and cruises industries to help save whales from the deadly threat of collisions.

Research is showing that globally more than 20,000 whales are killed every year due to ship strikes. 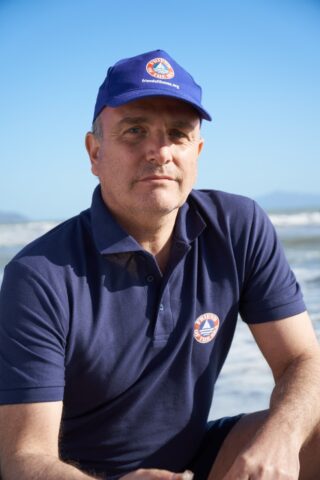 The director for Friend of the Sea, Paolo Bray, spoke to the Chronicle about the campaign and why Gibraltar is significant.

“The Mediterranean is very crowded with shipping vessels in general and according to the data we have about 220,000 vessels and this number is expected to increase three fold in the next 20 years,” said Mr Bray.

According to research the number of whales has dropped by two thirds in the past 20 to 30 years.

This is not just due to ship strikes but also the stress whales endure due to increased shipping activity in their areas.

“They waste so much more energy in not being able to reach the areas where they reproduce or feed and consequently this causes a dramatic decrease in terms of reproduction and presence in the Mediterranean,” Mr Bray said.

“This needs to be taken into account, it is not just a case of reducing the mortality but also taking into consideration the needs of whales. If we want to save these animals we have to go and set up an international effort and initiative which rapidly year by year tries to approach this issue and provide sanctuaries, but real sanctuaries not like the ones only on paper.”

“In particular in Gibraltar from the data that was provided to me there are sperm whales and fin whales which are both considered vulnerable and are found to be impacted by whale ship strikes over the years, as well as killer whales and long fin pilot whales where are now critically endangered.” 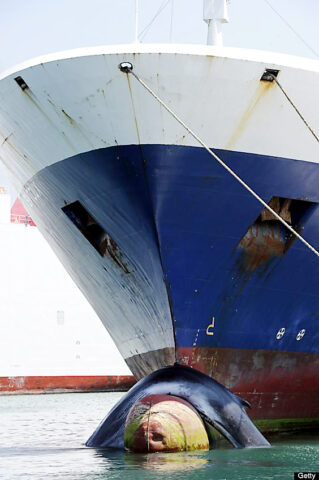 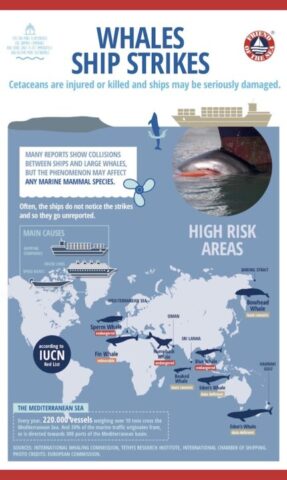 He noted that the presence of whales is not just good for the marine environment, but also local revenue from tourists or naturists who take trips out to see them.

Mr Bray has been involved in the conservation of marine life since the early 1990s when he began working on the dolphin safe tuna project and said this project has led to the reduction in dolphin morality in the tropical Pacific by 98%.

This project was the precursor to the sustainable seafood movement and other certifications.

“In the year 2000 fishing activities reached the maximum number of catches from the sea of about 100 million tonnes of captures and most of the stocks were overexploited and aquaculture compensated mostly the growing demand,” he said.

“The catches are gradually decreasing and most of the stocks are over exploited even though there has been a lot of good initiatives undertaken and there has been positive results from more sustainable fishing initiatives.”

In 2008 Mr Bray launched Friend of the Sea in the knowledge that certifications are needed to achieve conservation results.

“Friend of the Sea has mainly been certification of a product and sustainable fisheries and it then expanded to certify other products and services which respect the marine habitat so we also service sustainable shipping activity, sustainable ports, sustainable UV creams which do not impact coral reefs,” he said.

“At the same time we dedicate about 35% of our budget to conservation projects and campaigns. Among which the reintroduction of the almost endangered sturgeon individuals in the European rivers and other initiatives including the wet safe programme which is a mixture of conservation, certification or rewarding to motivate the industry to tackle an issue. The issue of whales and ship strikes.”

At present there are about 12 species of whales in 23 independent populations and half of them are considered to be endangered at some level and those that are most endangered are the right whales with only approximately 800 individuals left. Other species such as the blue whales or the sperm whales are also affected.

“For many years the disturbance to the populations and there cause of death or mortality has been in the whaling industry. Which led for example to a decrease in 99% of the blue whales population,” said Mr Bray.

“Currently the whaling which still goes on by choice of some nations like Japan, Norway and so on is causing the mortality of approximately 1,000 whales. Which dwarfs in comparison to the estimated mortality caused by whale ship strikes and also a incomparable mortality caused by entanglement in fishing gears whether actively or lost gear.”

“Both score an estimated mortality of about 20,000 whales so each of these causes is 20 times bigger than whaling.”

“When you consider some whales populations like the right whale are only 800 individuals it is clear that on a yearly basis these mortalities can lead to a quick extinction of some of these species. So one needs to do something to try and tackle this,” he added. 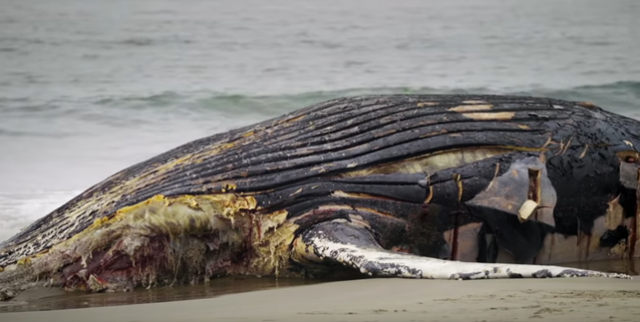 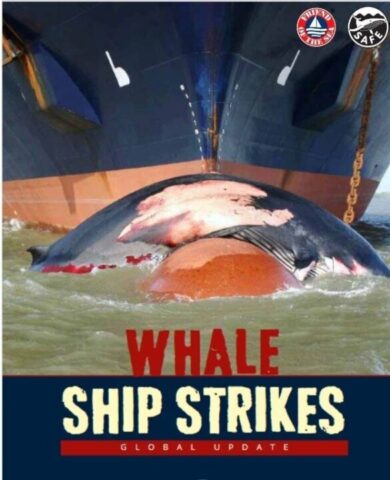 According to Mr Bray reports of whale strikes usually come from yachts, small boats and whale watching operators, and very rarely from the bigger shipping vessels or cruise liners.

He believes this is because the larger ships do not realise they are colliding with whales as on average they travel about three times faster than a whale.

“They don’t realise unless they find a whale on the bow of the ship when they return to the harbour,” he said.

“Sometimes they do not report when this happens. They claim it is not their fault, the whale was already dead or something like this.”

“The problem is that scientists estimate that only five to ten percent of dead whales strand at the beaches so that an autopsy can be carried out to find the origin. Because most of their carcass falls down and sinks to the bottom of sea to the sea bed.”

“So we have extrapolated from all of the available information at country level and internationally and the outcome is that the estimated mortality due to whales ship strikes of approximately between 18,000 and 25,000 per year. That is why the most likely number is 20,000 per year."

Various solutions to reduce this number have been developed with some of them being implemented.

The most effective one is moving the shipping lanes away from the areas where whales are found at higher concentrations.

Mr Bray gives an example where in the south of Sri Lanka in a dense marine traffic highway moving goods from west to east and east to west there is also a high concentration of blue whales. These blue whales use the area for feeding or are permanently living in the area.

“It is estimated that by moving the shipping lanes 15 miles south of their current position the risk of mortality or ship strikes would be lowered by 94%,” he said.

“We have done our best to convince the local Government, the Sri Lankan Government, we had a meeting with the world shipping council and this council was willing to move the lanes but this must come as a request to the International Marine Organisation coming from Sri Lankan. This never came so the situation has been unmoved for a number of years.”

While moving the shipping lanes is the best option, slow down areas are also effective and have been created near harbours in north America as an example.

In this areas there is ongoing monitoring and some companies are more respectful to these areas which are not stipulated in law and are voluntary.

Friend of the Sea collated designed a ranking system for areas where companies adhere to reducing ship strikes and also highlights those who are at the bottom.

Mr Bray said the highest ranking was 65% and acknowledged that there is room for improvement.

“More work could be done such as identifying more slow down areas and propose them, moving the shipping lanes, equipping the companies and the vessels with full time observation technology like infra-red cameras and also networking them with platforms that are already available linking them with the presence of whales so that vessels behind them in the lanes can action some measures to reduce the risk, like slowing down or moving slightly from the area,” he said.

Mr Bray is calling on individuals to approach their local Government or Port Authorities asking them to implement or support legislation that will help the whales while also contacting various companies such as cruise ships and ask them to reduce the risk to whales.

He added that Friend of the Sea can help with any campaign or meeting a person wishes to undertake.

“We are not trying to point the finger at anyone. Many shipping companies are aware of their environmental impact so all in all it is a good industry. Particularly the European one so we should constructively work together,” said Mr Bray.

“If anybody feels that they are able to support these efforts they should let us know,” he added.