NHS worker Julia Preece walks through the arrivals door at the airport having arrived on the Rock for a holiday on Monday morning. Pic by Johnny Bugeja

Gibraltar will continue to test travellers arriving from the UK against the backdrop of concern about the Indian variant of Covid-19.

Passengers arriving on the Rock will be required to take a lateral flow test within 24 hours, with testing to be offered for free by the Gibraltar Government. 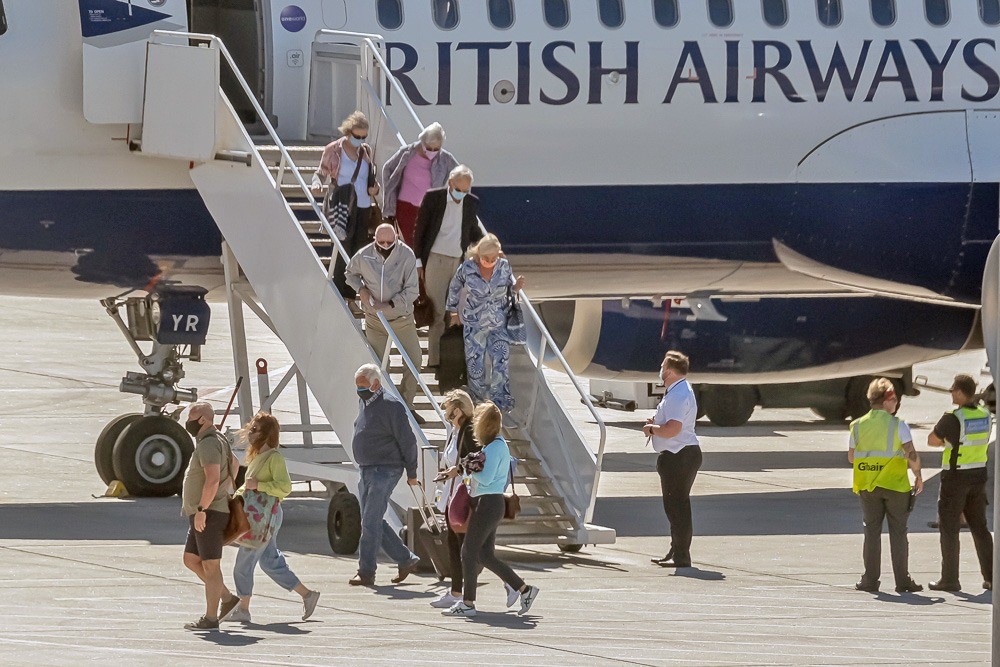 The decision to continue testing was taken on Monday as the UK Government lifted its ban on non-essential foreign travel, with Britons now able to go on holiday to “green list” countries, including Gibraltar, without having to quarantine on their return, provided they take one post-arrival test.

Gibraltar had signalled last week that it would not be requiring testing for air travellers arriving on the Rock, but reversed that decision on Monday morning following reports at the weekend of the spread of the Indian, or [B.1.617.2, ] variant in the UK.

Chief Minister Fabian Picardo referred to statements by Prime Minister Boris Johnson, who, over the weekend, cited scientific advice that the variant was present in the UK and spreads more easily than other strains.

On Monday, UK Health Minister Matt Hancock said a total of 2,323 cases of the Indian coronavirus variant had been reported in the UK.

Mr Hancock revealed there are 86 local authority areas where there are five or more confirmed cases of the variant - and said that surge testing will take place in Bedford following a rise in cases.

In Bolton and Bolton and Blackburn with Darwen, cases of the variant have doubled in the last week and are rising in all age groups.

The Gibraltar Government met with the GHA’s Consultant Microbiologist, Dr Nick Cortes, on Monday morning to discuss the latest developments.

The advice from Dr Cortes was that the Indian variant is expected to become more prevalent than the Kent strain.

“The UK is clearly in a race between the virus and the vaccine,” Mr Picardo told Parliament.

“The much-awaited easing of restrictions in the UK today, coupled with a more transmissible variant, will mean that the virus will move even faster.”

“There is still no clarity about exactly how much faster the B.1.617.2 variant spreads.”

“The UK government's scientific advisory group for emergencies says there is a ‘realistic possibility’ it could spread 50% faster. There are some higher estimates of 60% from India.”

“Anything which is more than 40% more transmissible than the Kent variant could once again unleash issues of resurgences of hospitalisations if the variant is resistant to vaccines.”

“For us, it is more about potential resistance to the Pfizer vaccine in particular, as the vast majority of our population have had that inoculation. There is no clear science on that yet.” 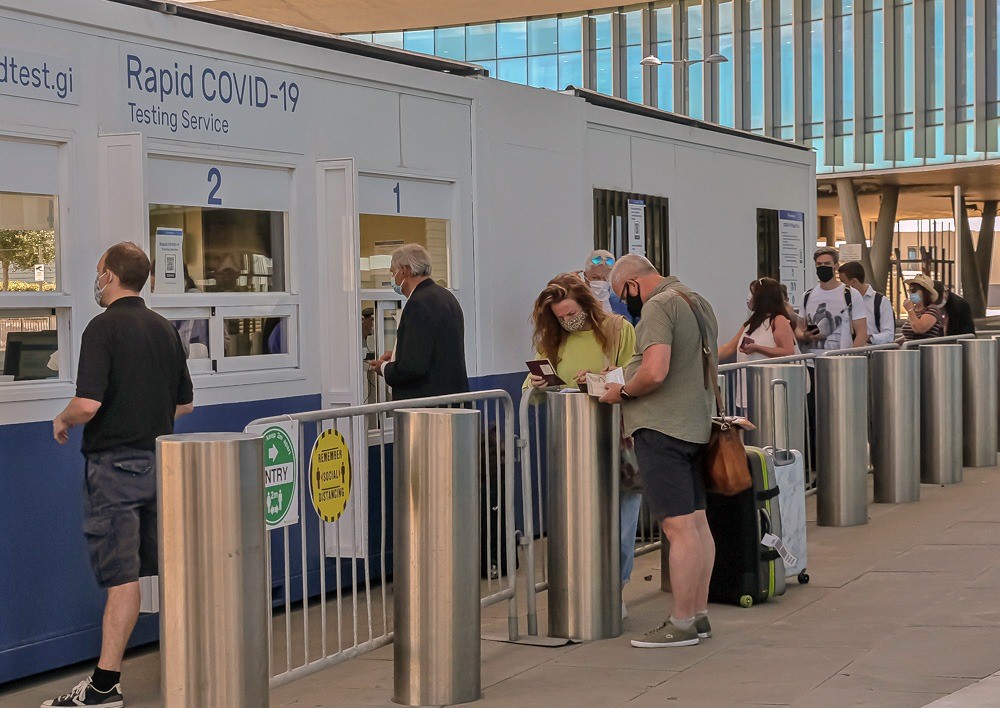 In his briefing, Dr Cortes had referred ministers to anecdotal evidence from the US where the Centre for Disease Control reported two hospitalised cases in people who had received the Pfizer jab.

Additionally, there is one case reported in the UK of a post-vaccination hospitalisation with the Indian variant.

Mr Picardo said the scientific data was not yet reliable but that there was a need for caution as Gibraltar welcomed visitors from the UK.

“We therefore need to be cautious in our approach and remain vigilant in the regime we have in place for arrivals at Gibraltar Airport,” Mr Picardo said.

The decision to continue with testing was approved by the Cabinet unanimously and was welcomed by the Opposition.

“This will continue whilst more information on the effect of the Indian variant is assessed,” Mr Picardo said.

“The application of the precautionary principle must prevail, whilst we will continue to be as welcoming of our kith and kin from the United Kingdom.”

The cost of the free lateral flow tests will be covered by the £30 fee charged for tests for passengers travelling to the UK, who under UK Government rules require a negative PCR test.

While lateral flow tests are not as accurate as PCR tests, they are faster and can detect people with a high viral load of Covid.

The decision to continue testing was communicated to passengers arriving from the UK on the first flight since the lifting of restrictions on foreign travel from England.

Staff at the airport were told of the development just moments before the first commercial flight of the day, the British Airways from London Heathrow, landed.

There were 127 adults and three children on board the flight.

Although the lateral flow tests will be offered for free, the website provided to passengers to register for testing was not working on Monday morning, according to passengers.

Most had travelled in the belief they would not have to be tested. While surprised by the news, they welcomed it. 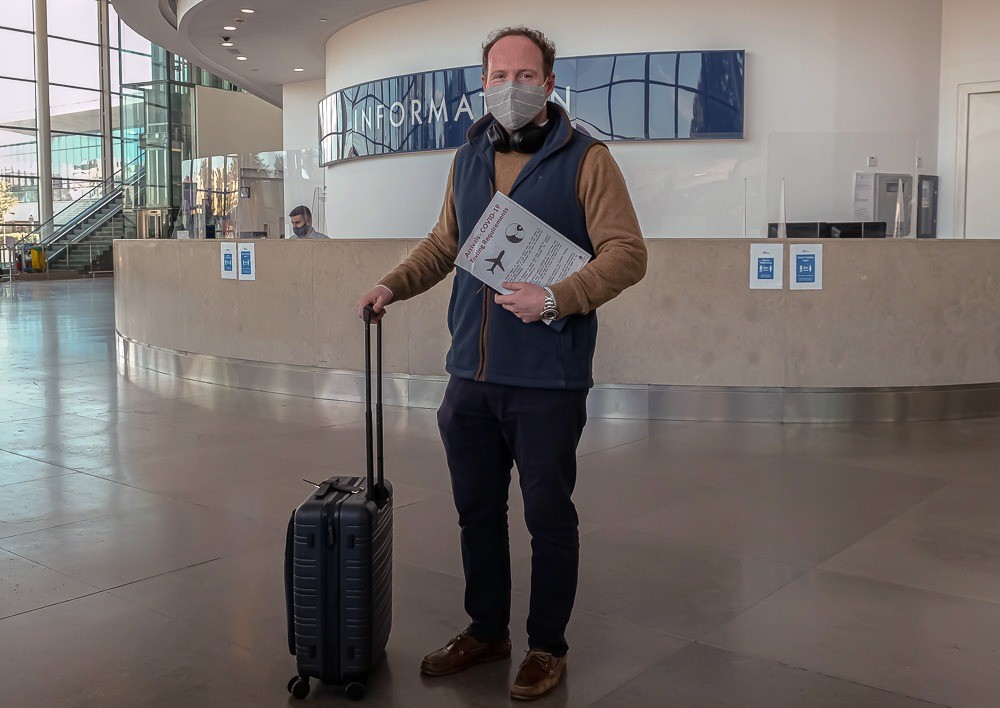 Andrew Welsh, one of the first passengers off the flight, walked out of the arrivals hall with a newly-printed information leaflet on Covid-19 testing held in his hand.

“When I checked online it said arrivals from the UK should not need to have a PCR test in the last 72 hours. But, having arrived, I was just handed a leaflet telling me I needed a lateral flow test,” he said.

“I have already filled in the passenger locater form and then everyone is now being stopped and is filling out another form to book a free lateral flow test.”

“It was a surprise, but it is just teething problems. The first day for everyone."

Julie Preece was returning to the Rock for the tenth time and will be taking a much-needed break in Both Worlds.

Ms Preece has been working in the palliative care section of the NHS and has had to watch many families suffer the consequences of the pandemic.

“It is what it is and we have to accept it,” she said, when asked about the sudden change in test requirements.

“I don’t mind taking the test,” he said, adding it offered peace of mind for him and his family members.

Pervander and Meet Choper, a couple who are in Gibraltar for three days, took a similar view.

“To be honest it is for everyone’s safety,” Mr Choper said.

“I think it is a good thing they are doing testing, because if somebody is actually positive it is bad for the people around them.”

“So it is a good thing, better safer than sorry.”

Jason Shaw and Chris Melling, who travelled to Gibraltar to take part in a pool tournament, will be staying until May 26.

“We are here under sports athlete [rules] so we are with a company and we have to go to the hotel and be in a bubble for a little while and do a test there under the company,” Mr Shaw said.

“Our driver is here to pick us up.” 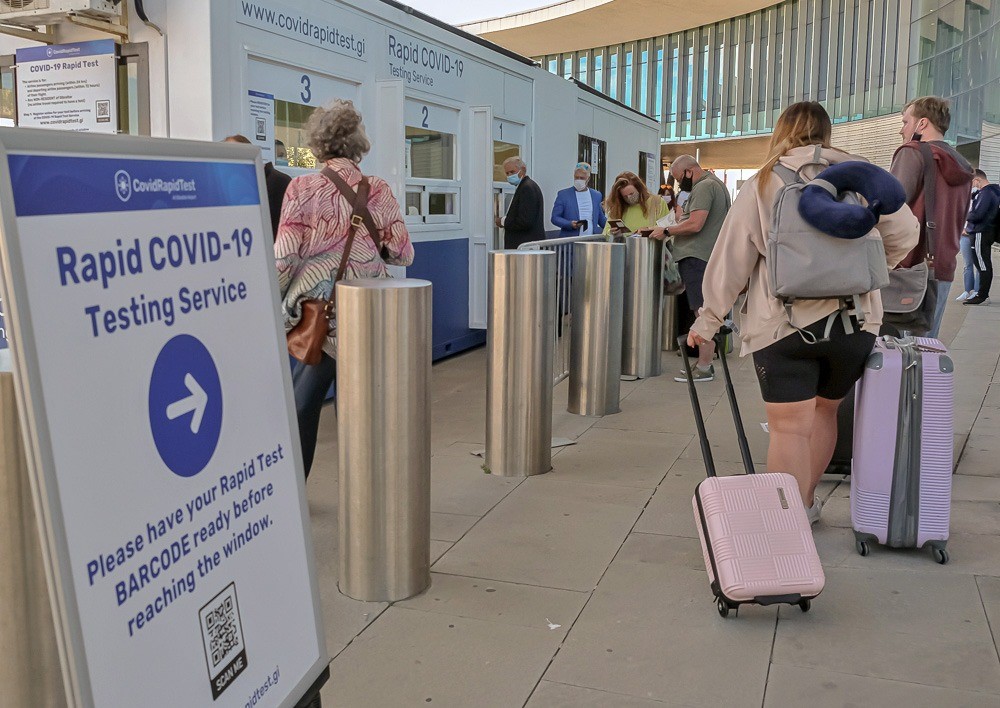