Gibraltar is encouraged by Spain’s “pragmatism” on its key demand that the border remain fully open after the Brexit transition period expires at the end of 2020, Deputy Chief Minister Dr Joseph Garcia said yesterday.

Dr Garcia told delegates at a briefing in the European Policy Centre in Brussels that ensuring border fluidity for residents, tourists and workers alike would mean greater prosperity for all.

“There are those who say that Spain must capitalise on the apparently historic opportunity she now has to recover sovereignty over Gibraltar after 300 years,” he told the conference in Brussels, refer-ring to Brexit.

But Dr Garcia said the centre-left government of Spanish Prime Minister Pedro Sanchez did not seem inclined to take that line.

“Sanchez has himself called for a different approach, one which puts a historic sovereignty question to one side and focuses on the opportunity we now have to create an area of shared prosperity on both sides of the border,” Dr Garcia told delegates.

“We will not agree on every- thing, but it is this pragmatism that creates the space in which we can talk,” he added.

Dr Garcia noted that the European Union had com- mon travel areas agreed with the likes of Switzerland and Iceland.

“There is no need to reinvent the wheel,” he said. 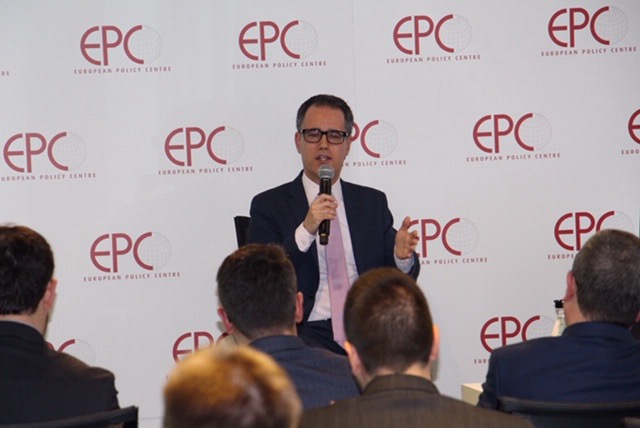 Dr Garcia arrived in Brussels late on Sunday night for two days of meetings and engagements.

He was speaking to a high- profile audience of diplomats, journalists, representatives of the institutions of the European Union and others in a well-at- tended briefing for which over 150 delegates had registered.

The subject of the briefing was “Brexit’s other land border: Gibraltar and the future of the UK-EU relationship”.

Dr Garcia said that EU at- tempts to “bully” Gibraltar have done nothing to build confidence, trust or goodwill going forward.

He said that the people of Gibraltar often felt “hard done by” and called for the politics of “conflict and confrontation” to give way to “dialogue and cooperation”.

ing the negotiations to leave the European Union and since.

When it comes to Gibraltar, he said, “anything goes” and added that this “represented no more than the bullying of a tiny territory by a huge supranational organisation”.

Dr Garcia also outlined the historical position of Gibraltar since January 1, 1973 when Gibraltar joined the European Economic Community, as it was then, as a European territory for whose external relations a Member State is responsible.

He emphasised Gibraltar’s terms of membership and referred to the border with Spain, making the point that at the time of the Rock’s accession the frontier was closed.

“The people of Gibraltar faced up to the Spanish dictator and endured nearly sixteen years locked up in a few square kilo- metres”, he explained. “This cannot be allowed to happen ever again.”

He told the audience that life for Gibraltar in Europe was uneventful until Spain joined in 1986 and started to use this membership to advance her claim.

The re-opening of the border, he said, set the foundations for the development of a close economic inter-relationship be- tween the two sides.

This had thrived while Gibraltar was in the European Union and it should not be placed in jeopardy at the end of the transition period.

He explained the positive economic impact that Gibraltar represented for the neighbouring region of Spain.

This included residents of Gibraltar spending money in Spain, over 14,000 frontier workers and over 1.5 billion euros in the value of annual exports from Spain to Gibraltar.

prosperity that already exists,” Dr Garcia said, adding that there were solutions in existence already which would allow for continued frontier fluidity.

He floated the idea of a common travel area between Gibraltar and the European Union as a possible way forward.

The message, the Deputy Chief Minister stressed, was that border fluidity for all, for residents, tourists and workers, equals greater prosperity for all.

The European Policy Centre was founded in 1997 and is the most important think-tank in Brussels.

It describes its role as engaging partners, stakeholders and citizens in EU policy making and in the debate about the future of the EU.

Reuters contributed reporting to this article.