Gibraltar frees Iranian supertanker Grace 1, despite US move to seize

The Gibraltar Government on Thursday released the Iranian supertanker Grace 1, which was seized on July 4 on suspicion it was shipping 2.1m barrels of crude oil to Syria in breach of EU sanctions.
Gibraltar said it had evidence the ship was bound for Syria when it was detained, but that Iran had now provided formal diplomatic assurances it would sail to another destination.
The authorities in Gibraltar also released the captain of the Grace 1 and three officers who had been arrested and bailed without charge pending the outcome of the investigation.
The decision to release the ship was taken hours after the US launched a separate last-minute legal move to detain the vessel and its cargo, which is owned by the National Iranian Oil Company and is worth $140m.
At a short hearing on Thursday, the Supreme Court was told the Gibraltar Government had received a request from the US Department of Justice for mutual legal assistance to commence new proceedings in a bid to seize the ship.
The basis for the request was not revealed in court but must now be assessed by the Ministry for Justice and the Government Law Offices in Gibraltar, which will then decide how to proceed.
In court, Chief Justice Anthony Dudley said there was no formal US application currently before him to seize the vessel.
“That’s not before me,” he said.
“There are no applications in relation to the US letters of request [for mutual legal assistance].”
On hearing that the Gibraltar Government was no longer seeking to detain the tanker under sanctions legislation, Mr Justice Dudley added: "She is no longer a specified ship...and no longer subject to detention."
Chief Minister Fabian Picardo said Gibraltar's mutual legal assistance authorities would now make "an objective, legal determination" of the US request for legal proceedings.
But as of Thursday afternoon, barring any fresh application before the court, he was clear the Grace 1 was free to sail from Gibraltar.
"The Grace 1 is therefore now released from detention under the Sanctions Act by operation of law as confirmed this afternoon by the Chief Justice of the Supreme Court," Mr Picardo said, insisting that the detention of the ship had stopped a valuable economic resource from reaching the regime of Bashar al Assad in Syria.
"The net effect is that this operation has become the most successful implementation of the European sanctions regime to date."
"It also amounts to a demonstration that Gibraltar is a jurisdiction that acts in keeping with the law and is committed to the rules based, international legal order."
"Gibraltar can be proud of the role it has discharged in guarding the entrance to the Mediterranean and enforcing EU sanctions."

DETAILED REASONS
Iran had repeatedly denied Gibraltar’s claims that the tanker was bound for Syria’s Baniyas refinery, which is the subject of EU economic sanctions targeting the regime of Bashar al Assad.
Just this week, Iran’s Ports and Maritime Organisation’s boss Jalil Eslami accused Britain of holding Grace 1 “on false allegations”.
But Gibraltar said it had solid evidence of the ship’s initial destination, while the UK has supported Gibraltar’s action to enforce EU sanctions.
After the hearing on Thursday, the Government of Gibraltar published detailed reasons for its decision to release the ship.
It said it had solid documentary evidence the vessel was bound for Syria when it was detained after entering British Gibraltar territorial waters for stores and spares.
Police investigating the case seized documentation on the ship including the vessel’s voyage plan, navigation charts and cargo loading plan that showed the Grace 1 was heading to the Syrian port of Baniyas.
The authorities also seized email communications between the captain of the Grace 1 and the vessel’s managers with multiple references to Syria as the port of discharge, the Gibraltar Government document stated.
But after weeks of talks to de-escalate the situation, Mr Picardo said he received written assurances from the Islamic Republic of Iran on August 13 that the ship, now re-flagged and insured in Iran, would not sail to any destination subject to EU sanctions if released.
"In light of the Islamic Republic of Iran’s undertaking, which I welcome and accept in good faith, and which, in my view, presents an important and significant change to the destination of the Vessel from that which is demonstrated by the evidence…I consider that there are no longer reasonable grounds to suspect that the detention of the vessel is required to ensure compliance with the EU regulation," Mr Picardo said in the detailed statement setting out the reasons for his decision.
"Furthermore, since compliance with the EU regulation has been enforced, [the Gibraltar Government] does not consider it to be in the public interest to seek to forfeit the vessel or its cargo." 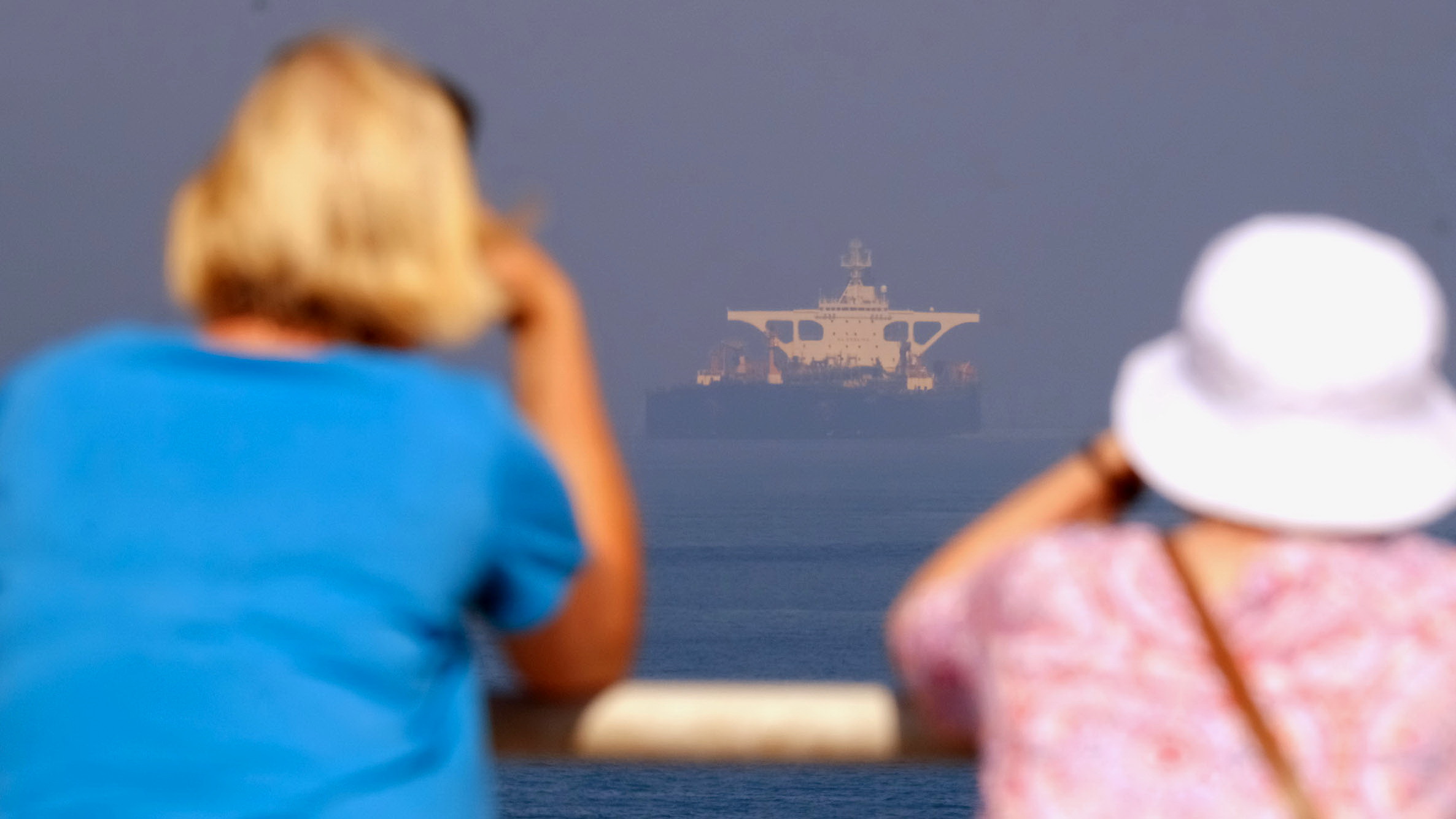 UK REACTION
The UK Government noted the conclusion of Gibraltar’s legal proceedings and the steps Gibraltar’s authorities had taken to prevent the ship’s cargo from reaching Syria.
"We note the Government of Gibraltar has received assurances from Iran that the Grace 1 will not proceed to Syria," a Foreign & Commonwealth Office spokesperson said.
"Iran must abide by the assurances they have provided."
"We will not stand by and allow Iran – or anyone – to bypass vital EU sanctions on a regime that has deployed chemical weapons against its own people."
Foreign Office minister Andrew Murrison said Iran must be held to its assurances that Grace 1 does not end up supplying Bashar Assad's regime in Syria.
Commenting on the release of the supertanker, Dr Murrison said: "I hope very much that the written assurances that Iran have given about the destiny of Grace 1 will be supported and that we will not end up with Grace 1 ending up in an entity that has been the subject of sanctions by the European Union.
"We would want to hold Iran to that and ensure that, indeed, Grace 1 does not end up supplying Bashar al-Assad's regime."
Britain has been in a delicate diplomatic position since seizing the ship.
The US is its closest ally, but like other European countries it disagrees with President Donald Trump's hardline policy on Iran, after Trump pulled out of a nuclear deal between Iran and world powers last year.
Several diplomatic sources have said Britain seized the vessel at the request of the United States, although Gibraltar denies that it was ordered to do so.
MAJOR SHIFT
The release of the Grace 1 is a major shift in a six-week stand-off that has further soured relations between Iran and the West, which were already strained after the US pulled out of an international agreement which curbed the Islamic Republic’s nuclear programme in return for an easing of economic sanctions.
The UK and Gibraltar insisted throughout that the Grace 1 was stopped because of its destination and not because of the Iranian origin of its cargo. EU sanctions prohibit the direct or indirect supply of any economic resources including crude oil to Syria.
But two weeks after the Grace 1 was boarded by Gibraltar law enforcement agencies supported by British Royal Marines, Iran’s Revolutionary Guards seized a British tanker, the Stena Impero, near the Strait of Hormuz.
The UK saw that as a tit-for-tat move and said there was no parallel between the “lawful” detention of the Grace 1 in British waters and Iran’s “unlawful” decision to capture the Stena Impero in international waters.
"There is no comparison or linkage between Iran’s unacceptable and illegal seizure of, and attacks on, commercial shipping vessels in the Strait of Hormuz and the enforcement of EU Syria sanctions by the Government of Gibraltar," the Foreign Office spokesman said.
"Freedom of navigation for commercial shipping must be respected and international law upheld."
Foreign Office minister Andrew Murrison has said Iran must be held to its assurances that Grace 1 does not end up supplying Bashar Assad's regime in Syria.
On Thursday it was not clear when the Grace 1 would sail from Gibraltar, or whether the US would seek to prevent it from doing so beforehand.
Iran said the ship would sail shortly. Foreign Minister Mohammad Javad Zarif characterised the U.S. bid to prevent it from leaving as "piracy".
"America desperately tried to block the release of the tanker at the last minute, but faced a miserable defeat," Iran's ambassador to London, Hamid Baeidinejad, said on Twitter.
"All preparations are done for the tanker to sail into open waters, and the vessel will soon leave Gibraltar."
Lina Khatib, head of the Middle East and North Africa programme at Chatham House, said the US request on the Grace 1 was based on its own imposed sanctions on Iran, and not the EU's sanctions on oil exports to Syria.
"Although the US expects its European allies to abide by these sanctions, it is up to the Gibraltar authorities to assess the allegations presented by the US," Ms Khatib said.
The US has been asking its allies to take part in a naval mission to protect shipping in the strategic Strait of Hormuz, at the mouth of the Persian Gulf, though European nations have been reluctant.
Britain has so far been the only one to express willingness to join a maritime security mission. It has also been giving UK-flagged vessels a naval escort since the Iranian Revolutionary Guard's seizure of the Stena Impero.

Reuters and PA Media contributed reporting to this article.