The Gibraltar Government has completed the first phase of the restoration of Grand Battery, adding that works will continue throughout the result of the site.

The first phase of the works included the removal of a World War Two blast wall, which exposed a series of 18th century fire steps hidden behind it along the northern defensive wall.

Further proposed works will continue to focus on the repairs and reconstruction of those damaged and missing fire steps.

Balustrades will be added along specific areas and any trees which are damaging the monument will be pruned or removed to expose the true scale of this defensive platform. 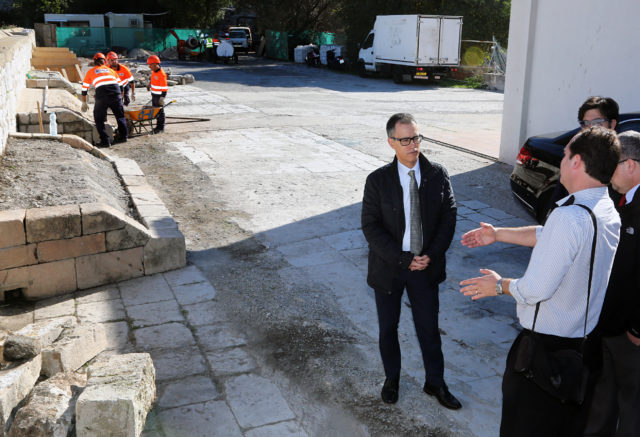 Given that the site is right next to Casemates Square, the area once cleared, will provide a site for the exhibition to the public of some of Royal Gibraltar Regiment’s own artillery pieces.

In a statement the Government explained that this was part of its policy of restoration and investment in Gibraltar’s important historic sites.

Together with the Kings and Queens Lines, these defences are impressive for any visitor to behold and is testament of the ingenuity of its creators over the centuries where architectural elements from several periods of occupation are evident, the Government said in a statement.

The Deputy Chief Minister Dr Joseph Garcia added: “I was delighted to visit the site and to be briefed on the ongoing works by the Project Manager Carl Viagas.”

“This was an area that we have been tackling at the same time as works on the Northern Defences have progressed. It is all a huge project which will see the restoration of the network of defensive structures that protected Gibraltar for centuries against a land attack from the north.”