The Governor Sir David Steel, continued his familiarisation visits to local services on the Rock by calling on the Borders and Coastguard Agency and the Ministry for Sport and the Bayside Sports Complex.

The Governor was introduced to various members of the Borders and Coastguard Agency during the initial part of his visit to the HQ where he was briefed on Aviation Security and Immigration matters. Sir David was later accompanied towards the Land Frontier where he was provided an insight as to the operational responsibility held by the Agency at said location. 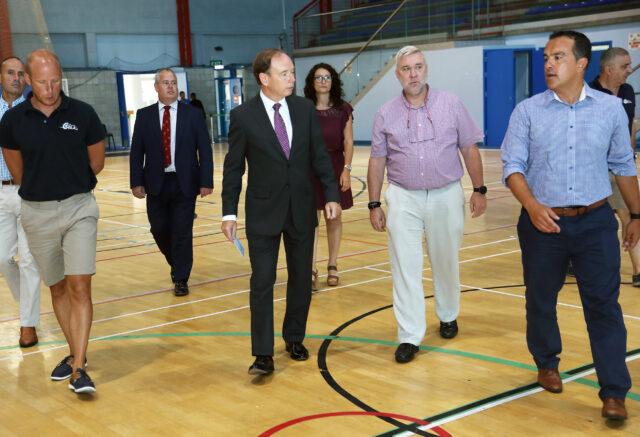 Chief Executive Officer Aaron Chipol was pleased with how the visit went.

“It was a privilege to be able to welcome Sir David at the Agency’s HQ this morning,” Mr Chipol said.

“Upon being briefed on our intricate roles and responsibilities, the Governor expressed his interest in understanding the procedures put in place to ensure the secure running of operations.”

“We appreciate Sir David for visiting us and we hope to be able to build on this by forging a resilient working relationship.”

On a separate tour he also visited the Ministry for Sport and the Bayside Sports Complex
Sir David Steele was greeted by the Minister for Sport, Steven Linares and was also introduced to Ministry staff before meeting the GSLA management team as well as other GSLA staff from the relevant departments.

Apart from been shown around the facilities, Sir David had a chance to see some sports associations in action as well as visiting the elements of the Stay and Play programme that are based at the Bayside Sports Complex.