The Governor, Vice Admiral Sir David Steel, formally opened the North Dispersal area of the Gibraltar airfield at a ceremony on the site on Thursday afternoon.

Dispersal is the military term for apron, the area of an airport where planes are parked. While it was being resurfaced C17s aircraft were being parked on the civilian apron.

“I have never been asked to attend the opening of a piece of ground,” the Governor joked.

“And when I said to Dominic my Aide De Camp ‘what do you think I should do? Do I sit down and touch or kiss the ground?’, he said: ‘Sir you are the Governor, not the Pope.”

‘So, I won’t be doing that this afternoon,” he added, laughing.

Sir David instead reflected on the runway’s history.

He told everyone gathered that they were sitting in an amazing position because in 1939 the airport first opened for sea planes before it became RAF Gibraltar.

And, since then, there have been massive changes in the airport to bring it to what it is today, an international airport servicing well over half a million passengers a year.

“As well as being a vital element for the Royal Air Force bringing in their C17s and all the other aircraft for their missions in North Africa and of course in Gibraltar,” said the Governor.

“To have this dispersal area is absolutely vital for the RAF because the C17s park themselves here on a very frequent basis and I would like to say thank you to all those who have been involved in this project. For being able to deliver it so quickly and within the constraints of Covid.”

He recalled that in 2016 the runway was resurfaced at night and how efficiently that was done in an airfield that was in constant use.

“The efficiency of delivering this is a model of cooperation between the contractor, between Gibraltar International Airport Ltd and of course between the RAF,” he said, noting a special thanks to Terence Lopez from the airport for the cooperation he provided to the Royal Air Force while the work was being carried out.

“It gives me great pleasure to be here this afternoon on this wonderful new dispersal. So ladies and gentlemen thank you very much indeed and I think this is a big moment for RAF Gibraltar and Gibraltar International Airport and I am glad we are all here to share it,” he added. 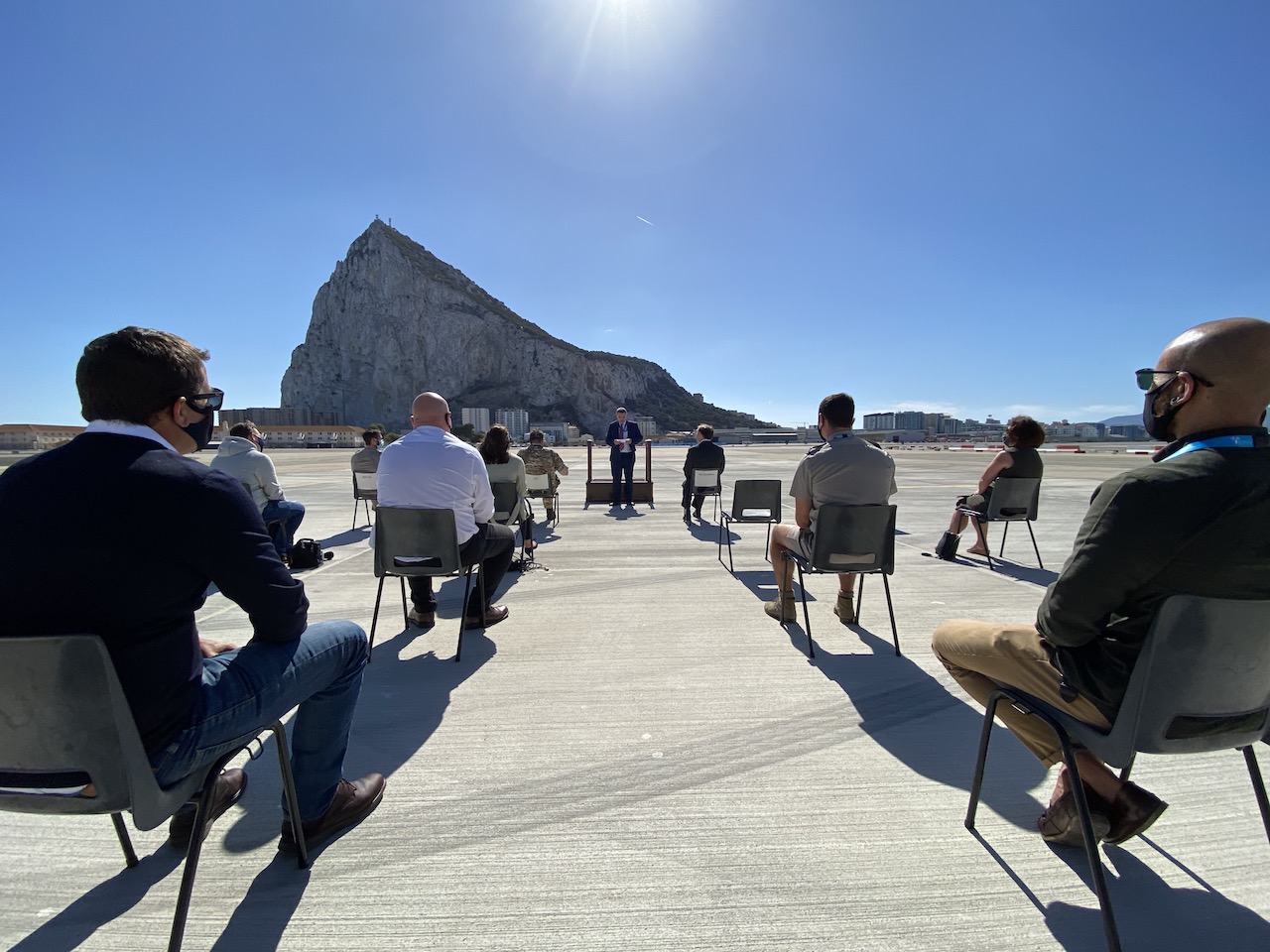 British Forces Gibraltar Chief of Staff Col Robert Lindsay also gave thanks and congratulations to everyone involved in the project and gave particular thanks to Interserve and the Gibraltar Air Terminal Ltd.

“To all of you who assisted many thanks indeed and although it is just a bit of tarmac [concrete] it is going to have great utility and help us to develop things further as British Forces Gibraltar,” he said.

Director of the air terminal Terence Lopez reflected on the year so far at the airport.

He spoke about how during lockdown the airport stayed open to bring people home and essential medical workers or supplies in, as well as the swabs that were being sent to the UK for testing before testing was brought about locally.

He also noted the links the airport had to the Port of Gibraltar and the assistance it gave crews on various ships under strict rules and regulations.

“When it comes to working together, considering the already existing high level of cooperation between the military and civilian organisations on the airfield, we saw a major effort to continue with our service delivery and ensure our civilian and military operations continued,” he said.

“I think it is a bit of a complete success story to be honest in the midst of negative news.”

“But, even saying that I am very happy to see this dispersal open again as all spaces are premium in Gibraltar and that includes the airfield and I know that the Station Commander and her team have been performing all sorts of miracles and juggling acts to accommodate aircraft in the last few months.”

“Of course, the use of our stands will always remain as an option should you require them again in the future. But, who knows I might be knocking on your door one day asking for the use of the North Dispersal,” he added.