The salvage operation on the wreck of the OS 35 suffered a setback on Saturday afternoon after the ship’s engine room flooded, preventing salvors from using onboard equipment to help extract remaining quantities of heavy fuel oil.

As clean-up operations continued at sea and additional booms were laid around the wreck, the Gibraltar Government warned further pollution was likely "unavoidable".

Dive teams were investigating the source of the water ingress and the pumping operation continued using equipment on vessels involved in the salvage operation, albeit at a slower pace.

At the same time, salvors were working to slow the flooding and try to empty the engine room, with some success.

Mechanical equipment on the OS 35 that could add to the pollution due to oily residues in the engine room were also being removed where possible.

Overnight, teams working on the wreck had managed to empty most of the heavy fuel in the aft storage tank of the OS 35, having previously removed all quantities of diesel on board.

But there are still about 126 tonnes of heavy fuel oil in the foreward tank of the OS 35, an area of the wreck that is submerged. 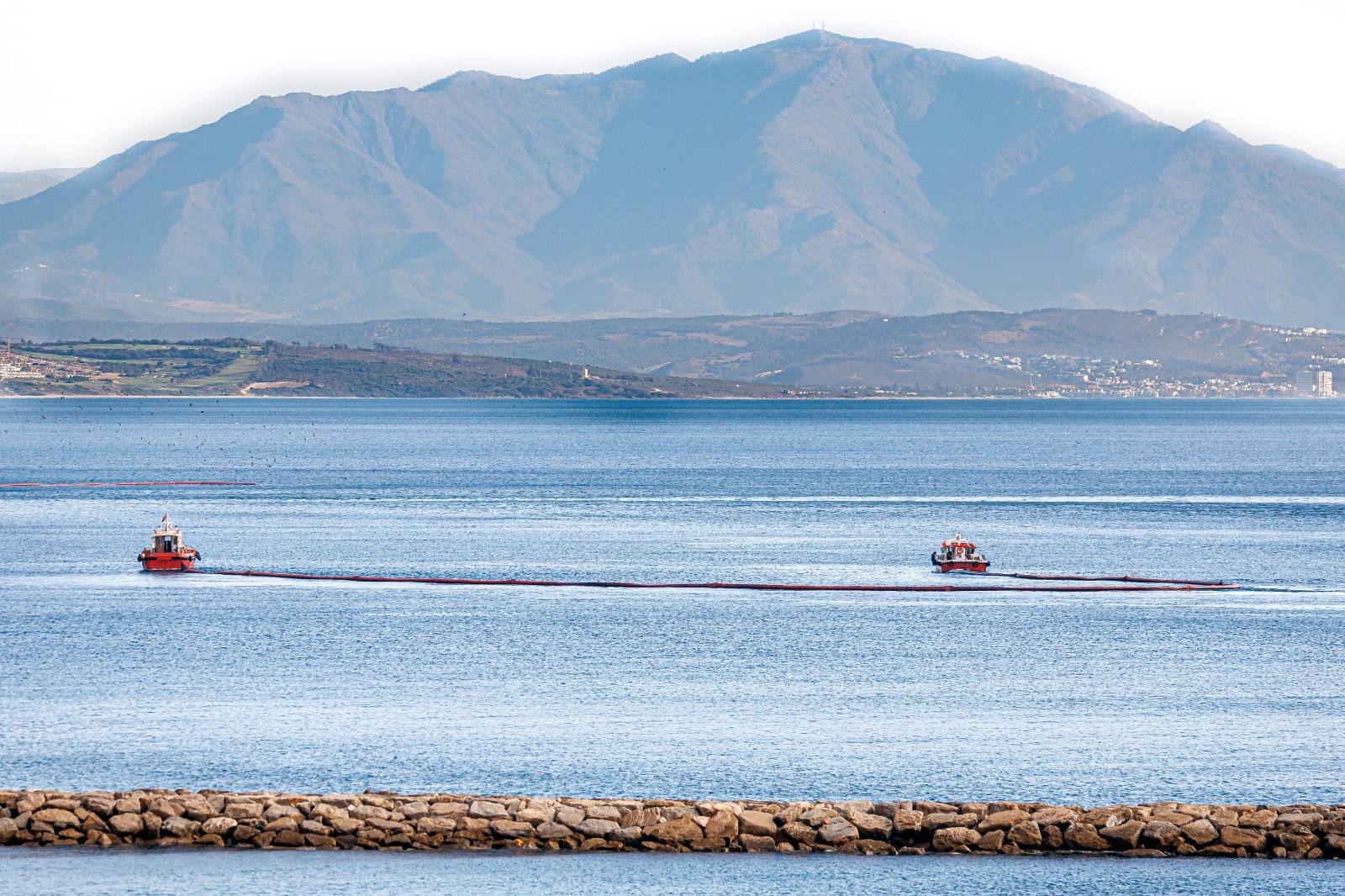 That means it will prove more complicated to empty this tank, with salvors considering different options to tap into the area and extract the fuel oil in the coming days.

The OS 35 was carrying 215 tonnes of heavy fuel oil, 250 tonnes of diesel fuel and 27 tonnes of lubricant oil when it was beached 700m off Catalan Bay on Tuesday morning to prevent it sinking after its hull was damaged in a collision with the liquefied natural gas carrier Adam LNG.

As well as the remaining fuel oil, the wreck still holds the lubricant oils as well as a cargo of steel bars.

The Adam LNG, which suffered only minor damage to its bulbous bow in the collision, is currently berthed in the Crinavis shipyard in Campamento for repairs. 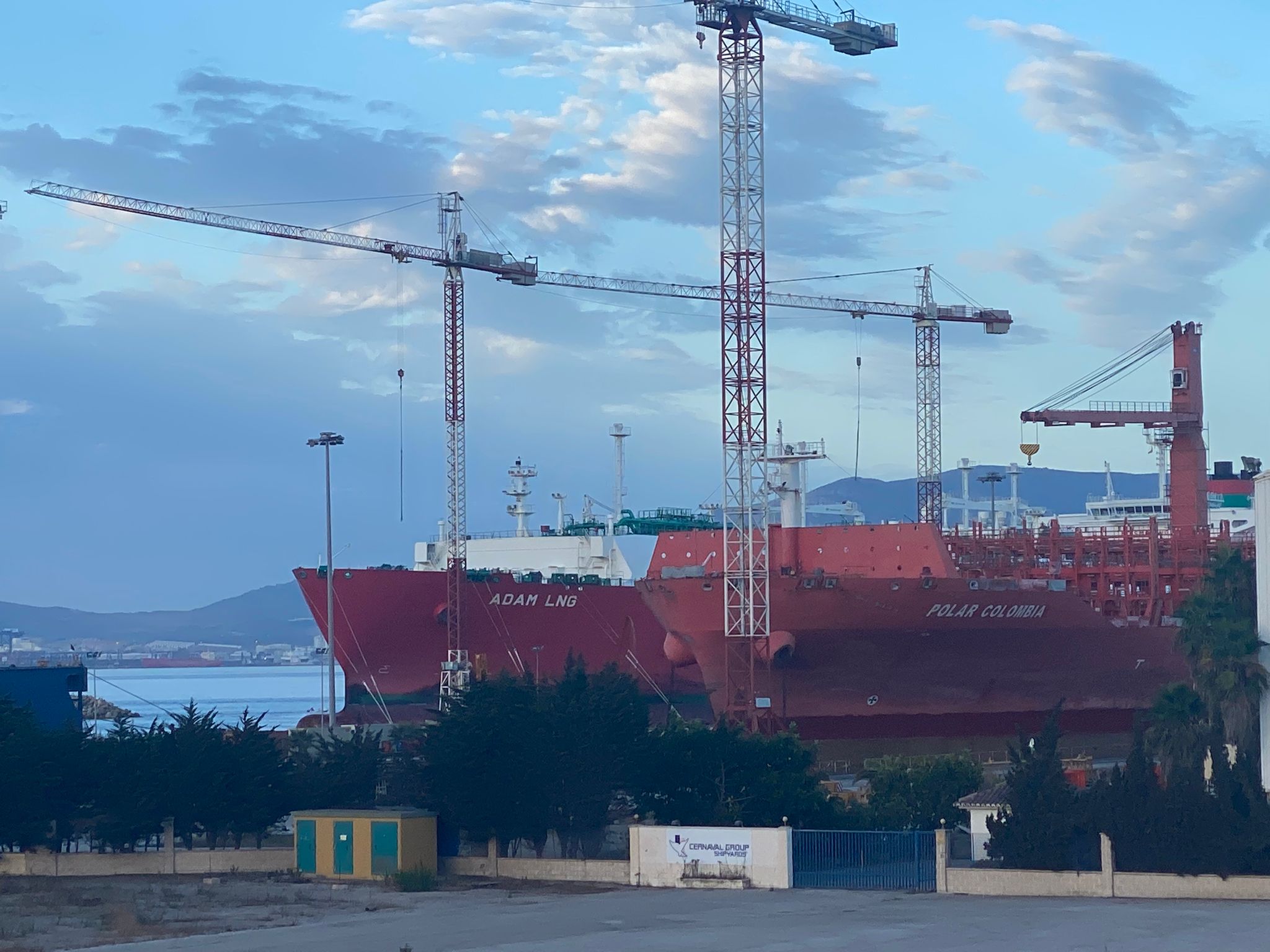 On Saturday afternoon, the Gibraltar Government issued a stark warning that the operation in the coming days would be complex and dynamic, and that further pollution was likely despite efforts to contain any spillage into the sea.

Even after the tanks are emptied, residual quantities of fuel oil and the vessel’s “crumpled” hull mean continued seepage of small quantities of pollutants are “almost entirely unavoidable” until the vessel is removed.

“The deployment of booms in layers around the vessel will prevent to the highest possible level the amount of seepage into open water but they will not provide a watertight layer of containment, which it is not technologically possible to provide,” the Gibraltar Government said in its latest update. 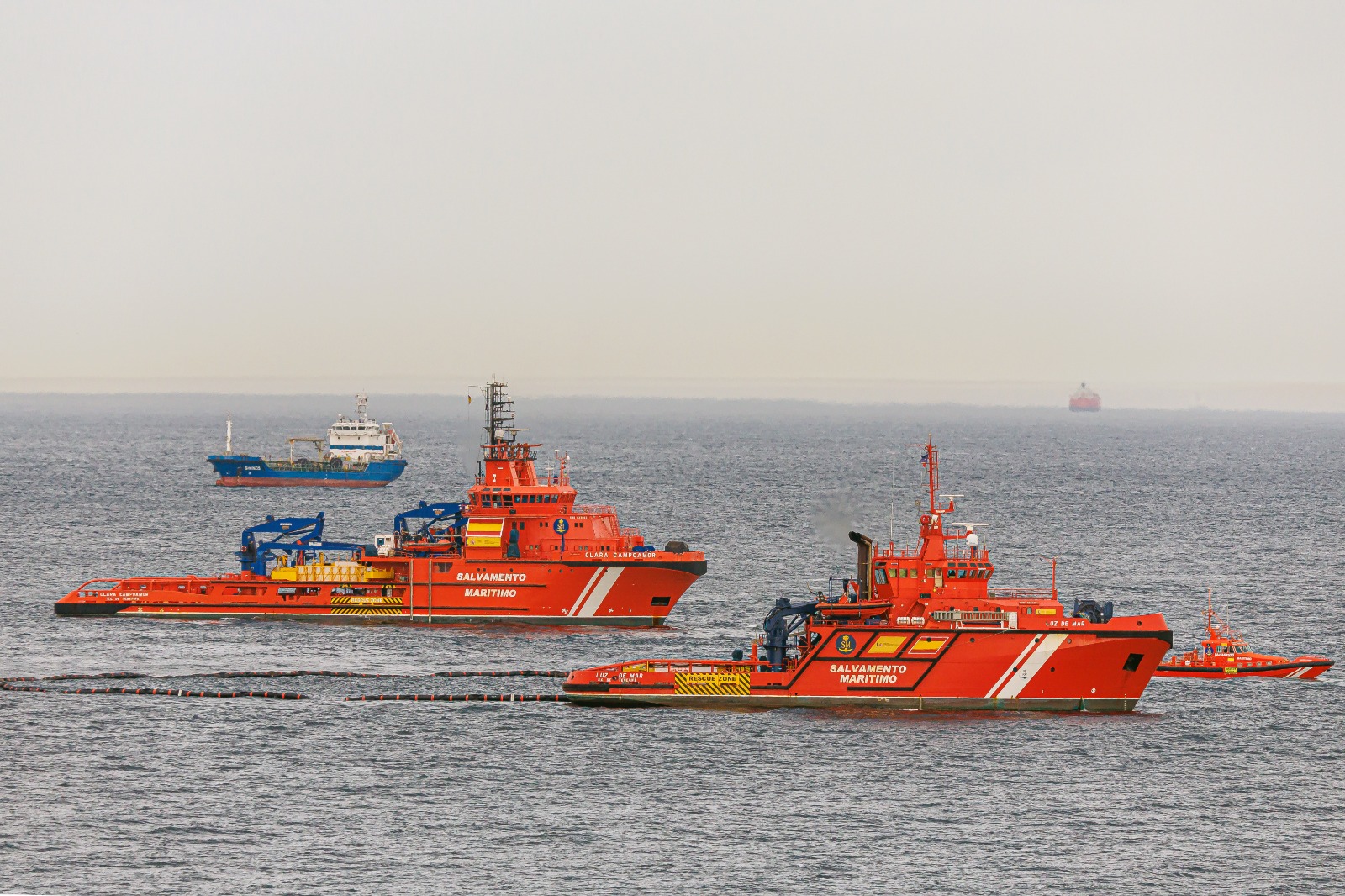 An additional 1km boom was being deployed on Saturday to surround the vessel.

The boom was being deployed by the Spanish state maritime salvage vessel Clara Campoamor, which has joined another Spanish vessel, the Luz de Mar, which has been on site since Tuesday.

Further booming operations will continue around the OS 35 and elsewhere in the vicinity of the vessel and any areas which require additional protection as soon as operationally possible.

The key priority in preparation for the operation for the extraction of heavy fuel oil from foreward tank of the OS 35 is to have successful layered containment to the highest possible level around the ship.

The aim is to avoid the release of as much free-floating oil as possible. 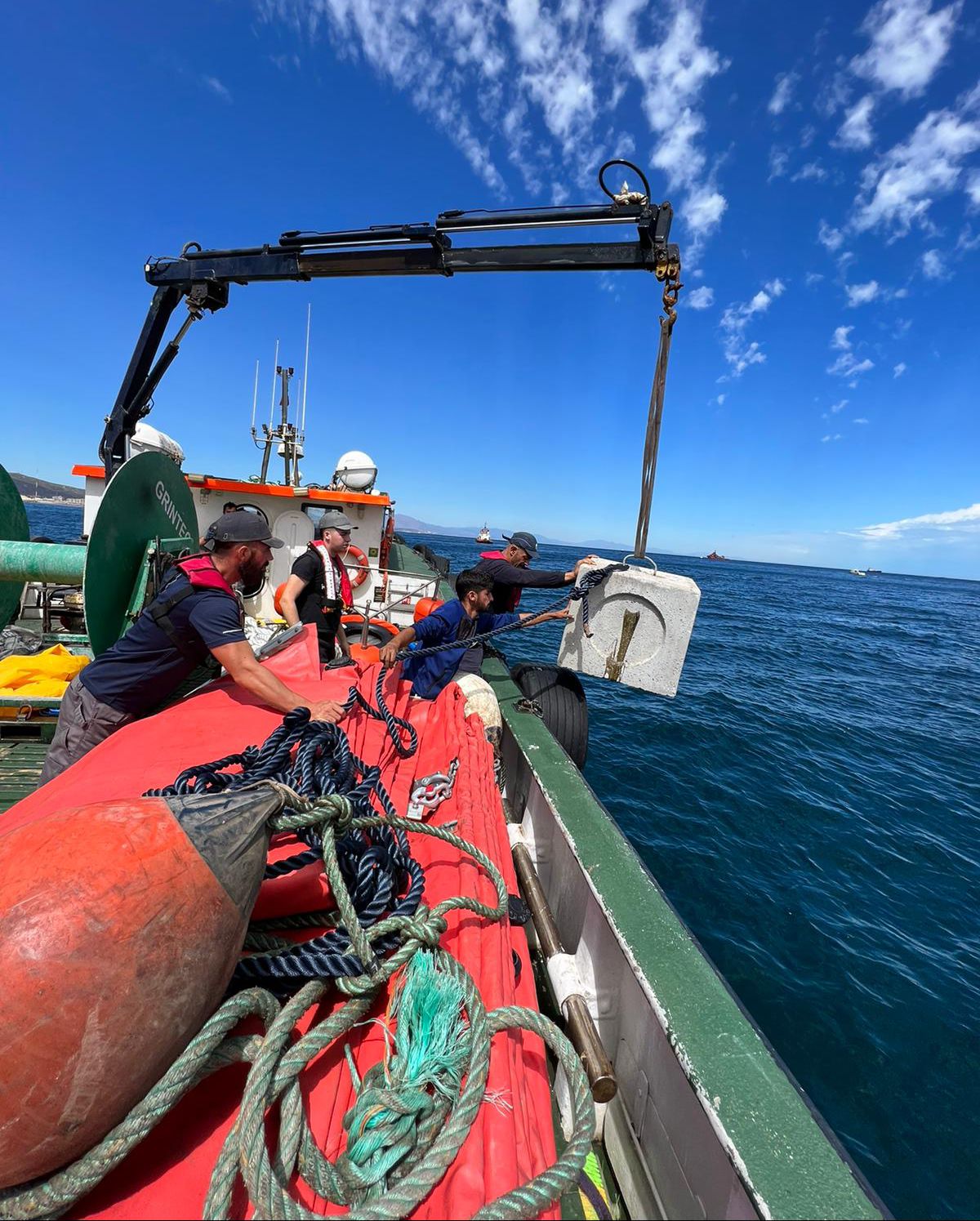 The operation to remove the fuel from the foreward tank will not commence until that additional boom is in place.

At sea, skimming operations have continued but the government acknowledged they are “limited in what they can achieve”.

The sheen is light, which means it has to be corralled into denser patches for collection.

To assist in these operations, a purpose built, small catamaran launch that can operate 24/7 is en route from Cadiz with a double crew and is expected to arrive and be operational later on Saturday.

This vessel is able to skim any oil that it encounters directly, including light sheen in open water.

It will be directed to areas of sheen identified by the overflights being conducted to assist the GPA by the Ministry of the Environment and a Spanish helicopter which is deployed by Port of Algeciras in support of ongoing operations.

“The GPA are marshalling all available resources that can assist the operational tasking required by the Captain of the Port in support of the ongoing salvage and pollution prevention and control operations,” the Gibraltar Government said.

“The Port of Algeciras continues working in close coordination with the GPA in order to establish if any of the assets available to them are suitable and to ascertain timelines for deployment.”

Spanish maritime authorities have been liaising closely with their Gibraltarian counterparts since shortly after the collision on Tuesday.

On Saturday, against the background of some criticism of Gibraltar’s response to the incident, the Spanish Government’s top maritime official praised Gibraltar’s decision to ground the OS 35 in shallow water on the east side of the Rock.

In an interview with El Pais, he said beaching the vessel had been the correct decision and meant salvage and anti-pollution operations would be easier.

“We can talk about details, but the manoeuvre was not incorrect,” he told El Pais.

“Everything is easier when it’s close, the same when it comes to containing pollution.”

“The visuals are more dramatic and troublesome, but it’s better.” 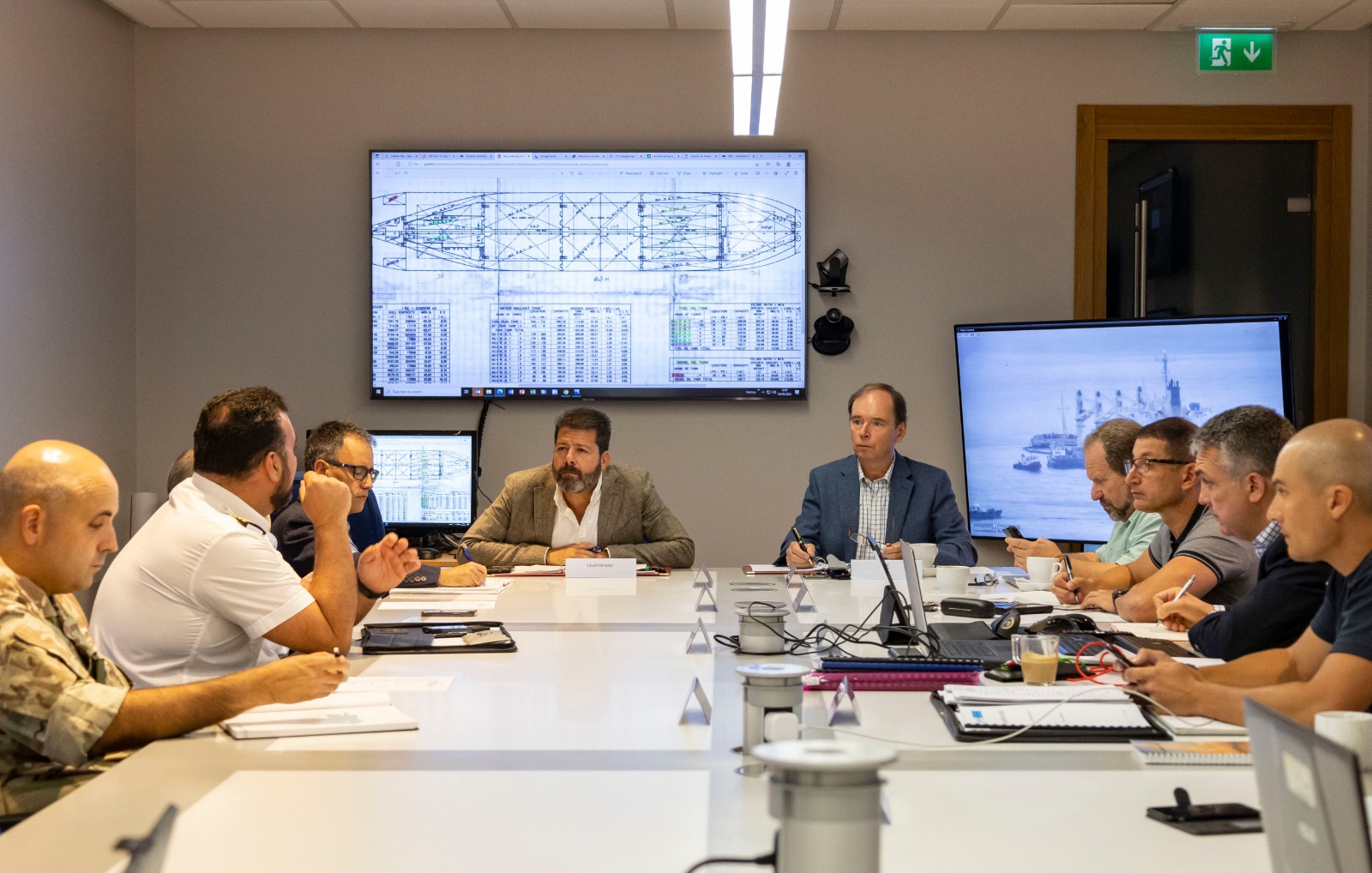 Spanish tugs and aerial surveillance assets have been working closely with Gibraltarian authorities and helping to contain pollution at sea to minimise the amount of oil reaching shore.

“We offered and they accepted,” Mr Nuñez said, describing how Gibraltar’s Captain of the Port, John Ghio, had contacted his counterpart in Algeciras, Karim Breir, shortly after the collision.

“They’ve had a very constructive attitude.”

“Gibraltar has made an effort to provide information.”

Mr Nuñez said it was important to draw lessons from incidents such as this but that it was too soon to reach any conclusion on what had led to the collision.

“I’m not one for quick value judgements without rigorous analysis, without having all the elements,” he said.

“As with every accident there will be all the necessary investigations and, from there, conclusions will be drawn.”

On land, the Department of Environment is leading on land-based clean-up operations and is actively working with volunteers and non-governmental organisations in order to co-ordinate and safely manage the efforts to clean the shoreline.

Lewis Stagnetto, the founder of the marine conservation charity The Nautilus Project, said teams of volunteers had monitored the coastline on both sides of the Rock since very early morning.

The reports coming in were “fluid”, he said, and while there was some evidence of oil and some sightings of tarred birdlife, most areas were relatively clear at this stage and the impact on wildlife limited. 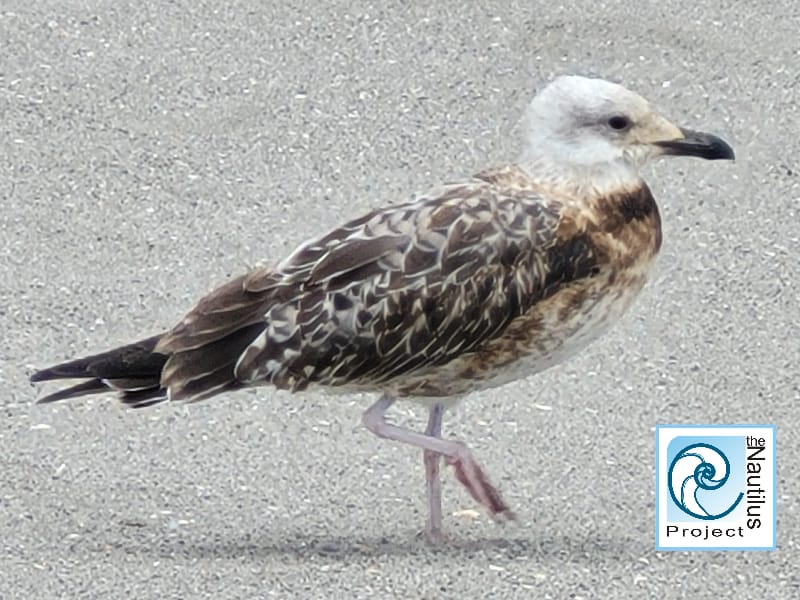 The concern, however, is how the situation will evolve in the coming days.

Amid wide public concern about the impact on the environment, a shoreline clean is being planned to take place on Sunday in conjunction with the ESG, GONHS and the Nautilus Project. 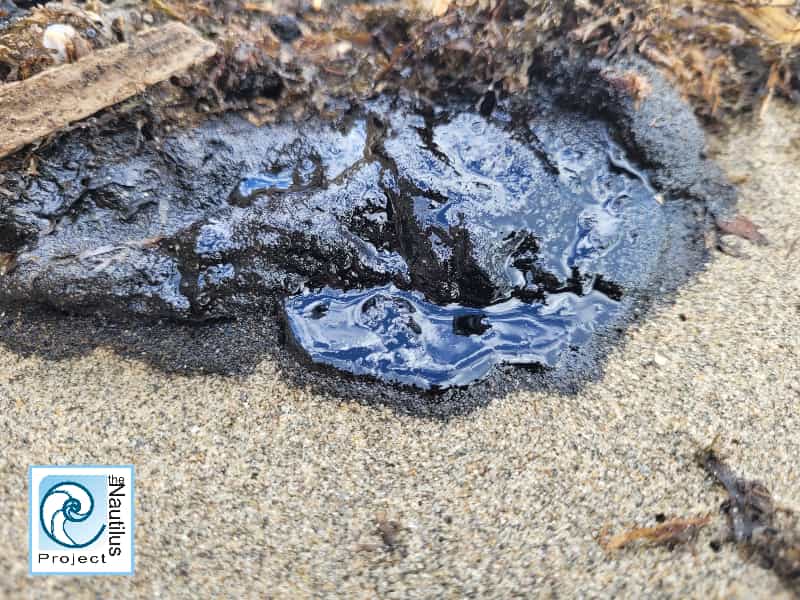 Those wishing to volunteer should write to the Department of the Environment on info.environment@gibraltar.gov.gi with their name, contact details and any particular skills or experience which might be relevant.

Any sightings of oiled seabirds should be reported to the EPRU on 58009620.