The GONHS Raptor Rescue Unit has released a wild Griffon Vulture that had been brought down by Yellow-legged Gulls earlier this month.

The vulture had landed on a cliff in the South District and was being “mobbed by gulls.”

It was exhausted after making the tiring crossing of the Strait and was in distress. 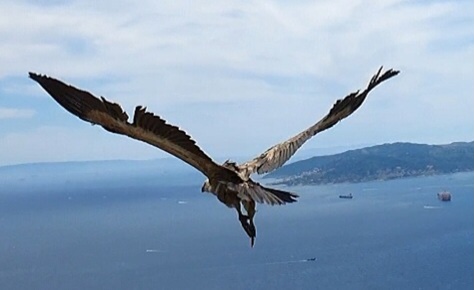 GONHS rescued the bird after gaining access to the difficult area where it had fallen.

“This was achieved thanks to the assistance of the neighbours of the adjacent estate,” GONHS said in a statement.

“After a couple of weeks of rest and rehabilitation at the GONHS raptor rescue centre under the care of the Vincent Robba and his team, the Griffon Vulture was successfully released and flew north into Spain.”

GONHS thanked Isobel Ellul, who initially reported the vulture, as well as all other neighbours who assisted in its rescue.

This is a time of year when immature Griffon Vultures return to Europe from Africa.

GONHS added vultures are ill-suited to crossing expanses of water, even those as narrow as the Strait.

One of the main hazards when they arrive in Gibraltar are the Yellow-legged Gull, which attack larger raptors during their nesting season, especially once the gulls’ chicks have hatched.

Vultures frequently land and rest around the Rock during this period, particularly on cliff faces or buildings.

“On most occasions they will fly off again and continue their journey north towards Spain safely,” GONHS said.
“However, some require rescuing.”

The GONHS has warned the public if you see a vulture at rest in Gibraltar, do not approach or disturb it. Anyone concerned about a vulture’s welfare should contact the GONHS Raptor Rescue Unit.