The afternoon sun pierces through the canopy of trees above me, casting a golden dappled light on the narrow track ahead. As a tree root comes into view, I hear my tour guide's voice repeating in my head: "These bikes can go over anything on the trails!"

But when a long black object slinks onto the path, I hit the brakes, nearly ejecting myself over the handle bars. My heart thuds. It's a Northern Black Racer snake, unfazed by the near miss.

I'm guessing my guide wasn't referring to snakes in her remit, so I wait for it to cross, in all its silken splendour.

I'm in the Capital Region USA, an area encompassing Maryland, Virginia and Washington DC (the gateway to the region). The landscape is diverse; horses graze peacefully on emerald pastures, and lush, fertile hills roll into mountains, with dense forests covering their rugged terrain. Outdoor pursuits are limitless and include hiking, horse-riding and biking trails.

Virginia's Blue Ridge (or VBR as it's known by the locals), is a mountain biker's paradise. Bordered by the Appalachian Mountains to the west and the Allegheny Mountains to the east, it's recently been designated a Silver-Level Ride Centre by the International Mountain Bicycling Association (IMBA), and draws thousands of global biking enthusiasts to its trails each year. 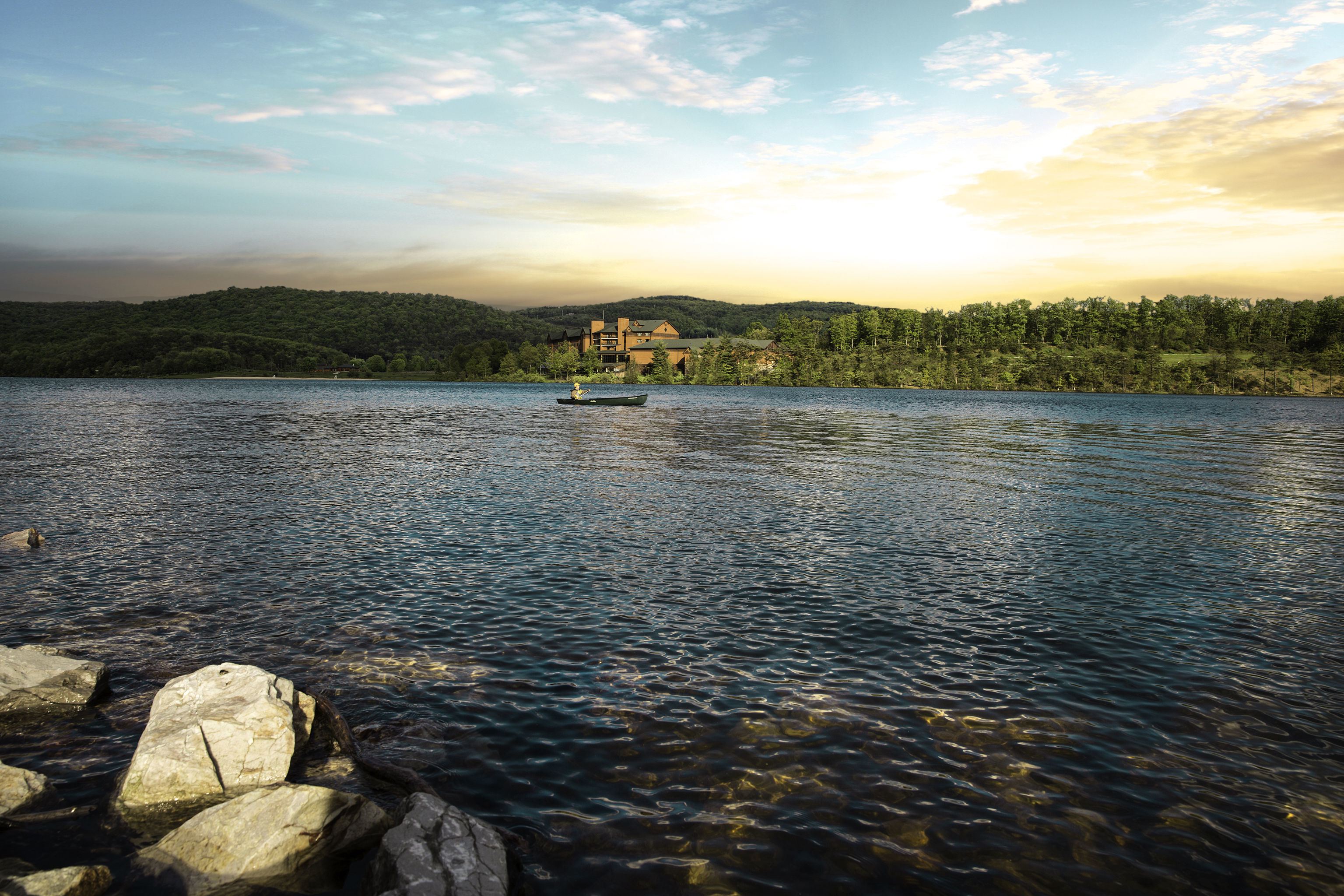 Carvins Cove in VBR is the second largest municipal park in the USA, and boasts 40 miles of multi-use trails for all abilities. I pick up my bike from Roanoke Mountain Adventures (roanokemountainadventures.com) and begin by tackling The Enchanted Forest, a half-mile single-track trail with conditions as charming as its name. Pine needles scatter the dusty surface in a thick blanket, perfect for cushioning your landing, should a particularly large tree root knock you off balance.

I continue my ride keeping my eyes peeled for black bears and bald eagles who call the area home (sightings are rare but not unheard of), as well as the more common serpentine sorts nestling in the undergrowth.

Roanoke, VA is the largest city and main hub of the VBR region, with an excellent selection of restaurants and bars - perfect for refuelling after a long day on the bike.

It's also home to the Hotel Roanoke (hotelroanoke.com), a historic hotel with 330 rooms recently restored to their original 19th century splendour. Unsure where to find it? No fear, locals will point you there with pinpoint accuracy - it's towered over the city since 1882 and is a treasured landmark. Make sure to dine in their opulent Regency Room, the perfect setting to try peanut soup and spoon bread. Peanuts are one of Virginia's most illustrious exports, and rumour has it that the hotel's soup recipe has remained unchanged for over 100 years.

For picture-perfect views of the city, hike the 1.3-mile Star Trail up Mill Mountain to The Roanoke Star, the iconic symbol of Virginia's Blue Ridge. Originally built in 1949, it's the largest free-standing star in the world and is illuminated every night, casting a yellow glow across the hillside. (Your visit to VBR isn't complete without a game of 'spot the star' from downtown Roanoke). Once at the top, I admire the panoramic view of the sprawling city below, lovingly embraced by the surrounding mountains.

All this exploring is making me hungry, so I head for an early dinner at El Jefe (eljefesalem.com), in Salem, VA (a 20-minute drive from Downtown Roanoke). Their cinnamon-braised pork carnitas are spicy, succulent and delicious. I pair them with a jalapeno cucumber margarita while stretching out my aching legs in the warm evening sun.

Sundowners at Twin Creeks Distillery (twincreeksdistillery.com) in Franklin County, VA, are perfect to offset all the exercise. After all, life's about balance, right? Franklin County, aka the 'moonshine capital of the world', got it's nickname during 1920s Prohibition, and it was rumoured that most residents were tied up in the illegal moonshine industry, distilling and distributing hundreds of thousands of gallons of the corn-based alcohol across a five-year period. 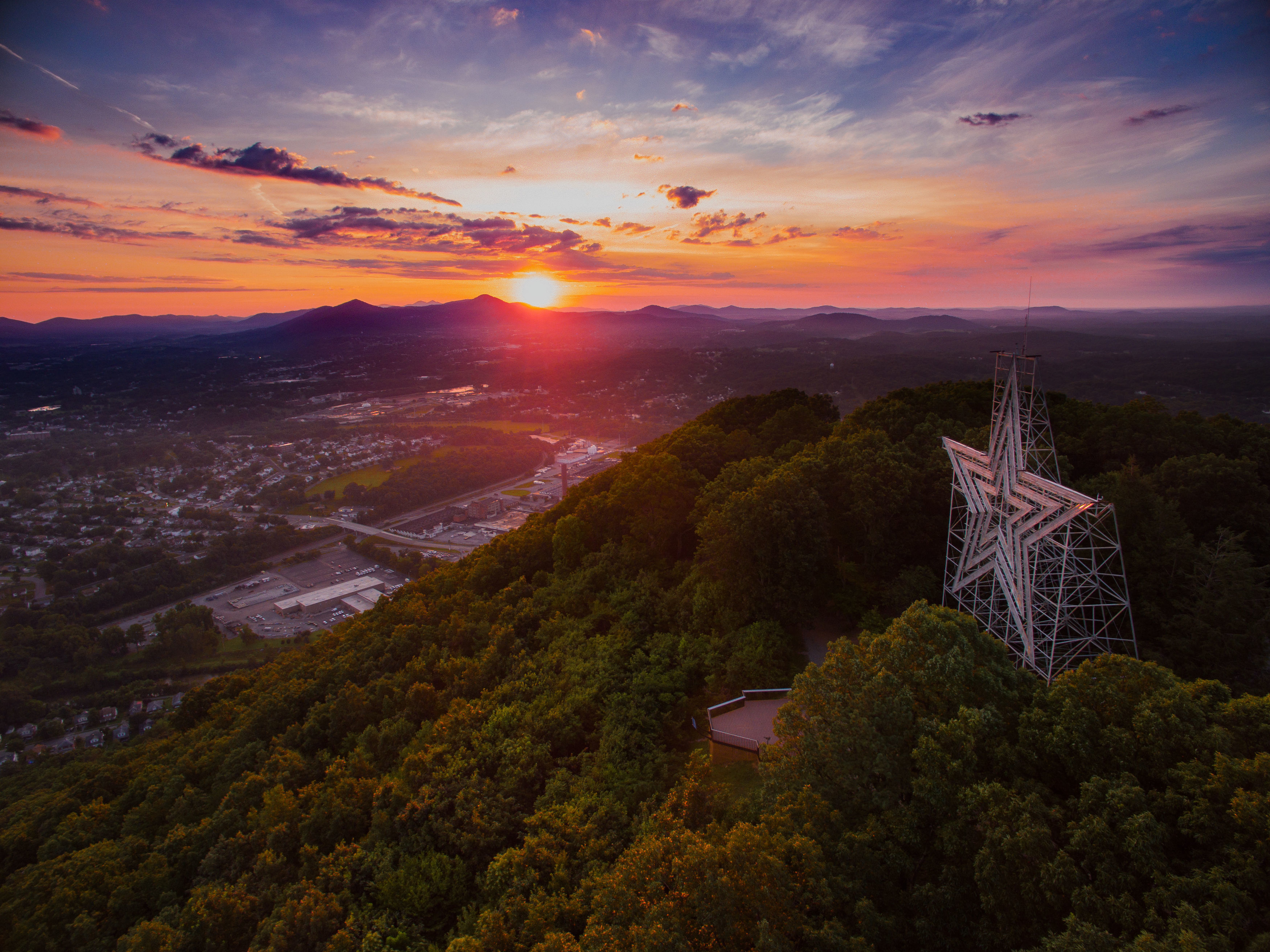 Gaining his licence to distil in 2015, Chris was the first person to sell a legal bottle of moonshine in the county. The irony isn't lost on him and he delights in sharing anecdotes with me throughout the evening.

Bright and early the next morning, I'm crossing the state border into Allegany County, Maryland, zipping past eastern red bud trees which line the highway, their blossom reminding me of candy floss on wooden sticks (good timing - I'm told they're only in bloom for two weeks of the year in May).

Kitted out by Get Out & Play Outfitters (getoutandplayoutfitters.com), I spend the afternoon riding a section of the Great Allegheny Passage. Advanced riders can tackle the 150-mile ride from Pittsburgh, Pennsylvania, to Cumberland, Maryland, but I'm after a relaxed amble.

The path is paved smooth for most of the ride, and I'm flanked by a gentle stream, its trickle providing a peaceful soundtrack to my exploration. I glide into the town of Frostburg, MD, an hour later, having crossed both the Eastern Continental Divide and the Mason-Dixon Line (the original boundary of the Northern and Southern US states).

It would be easy to while away an afternoon exploring Frostburg's historic downtown, admiring the church spires which tower over the brown stone buildings and enjoying it's fresh mountain air. But I'm here for caffeine - a pick-me-up ahead of our next expedition. There are no Starbucks to be found here, because the downtown is a hub of family-owned businesses, and the cosy Clatter Coffee (15 S Broadway), owned by friendly John and his wife Lesley, is just the ticket. Not for the first time, I relish in the community spirit running through this town's veins - just like the caffeine working its way through mine.

The clock rolls round for the next activity, but this time, I ditch my wheels and head on foot to explore the Lakeside Loop Trail at Rocky Gap State Park. I mosey along the scenic quarter-mile route to the Canyon Overlook. The vista at the top is a treat, revealing mountains covered in dense hemlock forest stretching to the horizon. Turkey vultures glide above like kites, occasionally diving back to earth for a lunchtime snack.

Back on the Loop Trail, I'm captivated by the brilliant blue waters of Lake Habeeb, glistening in the late afternoon sun. An impromptu dip is tempting, but I resist. There's been quite enough exercise this week, I conclude, continuing my stroll and breathing in the now familiar smells of the forest.
(PA)