The Gibraltar Government has said it is probable the hull of cargo ship OS 35 has not broken apart but has crumpled, and works will take longer than a few weeks.

The announcement came late in the evening, after the Captain of the Port John Ghio updated a Civil Contingencies meeting, chaired by the Chief Minister Fabian Picardo and the Governor Vice Admiral Sir David Steel on the evening’s developments. 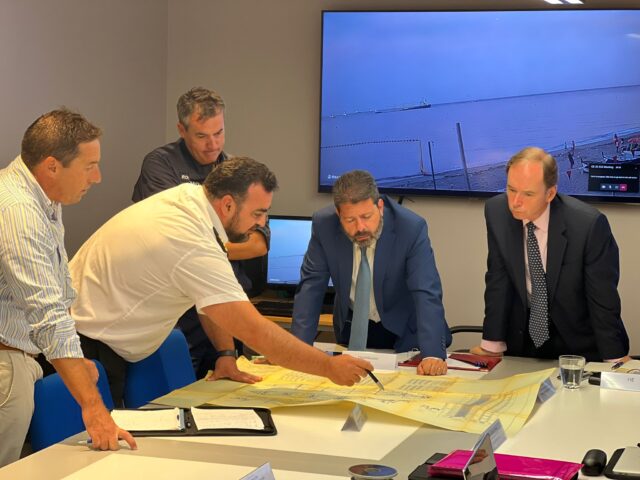 The Government said the first concern is the offloading of the amount low sulphur heavy fuel oil onboard as soon as possible, followed by diesel and then lube oil.

"The fuel will now be dealt with as waste and will likely be sent for recycling," the Government said.

"Current evidence suggests that the fuel onboard is well contained and it is hoped that offloading can begin tomorrow morning."

"The Government said public should be reassured that there has been no way to remove the fuels in question from the vessel any sooner in a manner that was not a risk to the environment. If such an option had been available with any resources at hand in the area, it would have been taken."

"The ongoing plans to remove the oil are the best possible plans for removal of the fuels in question in a manner that is clean and will not risk lasting environmental damage to Catalan Bay, our wider coast or the our neighbour’s coasts."

"The boom in place on the port side of the vessel’s hull is being separated from the hull to avoid any potential oil seeping outside."

"A further inflatable boom will be deployed tonight in J formation to collate any oil that may seep overnight."

"At least 3 further booms will be ready to be deployed in J formations by tomorrow. A foam-filled boom will be placed at Catalan Bay as a tertiary precautionary measure to protect the beach."

The Government added additional oil spill equipment has been procured from the UK and is expected to arrive in Gibraltar on Sunday.

"The Department of Environment has staff qualified in oil spill response on standby to manage any response," the Government said,

"Environmental sensibility mapping is underway to determine the most placements for preventive booms along Gibraltar’s coastline and to protect both Gibraltar’s beaches and those in neighbouring Spain."

"As a result of the further break experienced this afternoon, the salvage of the hull of the OS 35 is now likely to require a longer term plan."

The Government said the timeframe for this is now likely extended past the previous expectation of a few weeks.

"The floating of the vessel by installing a cofferdam is likely no longer a viable option for its salvage," the Government said.

"These issues will, however, not be clarified until a dive team is able to inspect the damage in the morning."

"There will be a blue-light presence on the water to provide security overnight."

At 7am the salvage master and P&I will board the vessel.

"A dive team will conduct an external survey and determine the extent of any break," the Government said.

"It is hoped that it will be possible to begin to pump out fuel from the vessel."

Early this morning the Government said, the situation has remained stable overnight.

“Continuous monitoring has been in place throughout the night, with presence on-scene by anti-pollution assets,” the Government said.

“Additional monitoring by drone and land based thermal imaging assets have revealed no significant changes to the situation.”

“The Salvage team is onboard the vessel to continue assessing and planning the way forward, and divers will be in attendance shortly to conduct external hull survey.”

“During the course of the morning, the Gibraltar Port Authority will continue with deployments of equipment and preparations for further operations.”

The Gibraltar Contingency Council will convene at 12.30pm.

The Foreign Secretary, Liz Truss, has been in contact with the Chief Minister to offer UK support for the operations if necessary.

The Chief Minister has expressed the gratitude of the People of Gibraltar to Ms Truss who has taken time out from the last throes of the Conservative leadership election to be in contact with the Chief Minister.

The Government announced a major incident on Wednesday evening, with the concern now on oil spills, and its impact on local and neighbouring coastlines.

“There has been a substance leak from the vessel as a result of the movement arising from its break,” the Government said.

“Initial investigations indicate that this is lube oil. This lube oil is currently contained within the primary boom and all efforts will be made to remove it from the sea using a skimmer and sludge barge before it is able to leak from within the boom.”

“The salvage master has confirmed to the Captain of the Port that all fuel valves were isolated before the break occurred.”

The Government said their priority and of the Captain of the Port is to mitigate and minimise any environmental impact.

"There was a clear risk that this would occur. It was for this reason that urgent attempts were being made to remove fuel from the vessel," the Government said.

"This has not yet been possible."

"The OS 35 is already surrounded by an ocean boom that should contain any spill of oil which may occur."

The major incident has resulted in all other day-to-day operations at Gibraltar Port paused to ensure availability of resources.

“All GPA service craft are on standby; all booms at the GPA’s disposal have been mobilised; 2 vessels will be deployed in U formations with booms to start corralling any oil that might spill from the vessel and that might leak from the primary boom; an additional boom will be deployed along the coastline that is at risk of direct impact; and the salvage master has been authorised by the Captain of the Port to re-board the vessel to gather facts, together with the P&I on-scene commander,” the Government said.

A meeting of the Gibraltar Contingency Council chaired by the Chief Minister, Fabian Picardo, and the Governor, Vice Admiral Sir David Steel was convened as soon as the news of the vessels circumstances was confirmed.

"The Captain of the Port is taking action to ensure that any environmental impact is minimised," the Government said.
"All persons on board, a total of 24 crew and 6 surveyors who were on board at the time, have been evacuated safely."

"All operations at Gibraltar Port are currently suspended to concentrate all resources on this emergency."

The Chief Minister has briefed the Leader of the Opposition on the latest developments and the declaration of the Major Incident.

This post will be updated as further information becomes available.