In October 1963 the world premiere of ‘From Russia With Love’ was held at the Odeon cinema in London’s Leicester Square. The second James Bond film (‘Dr. No’ had appeared a year earlier), it set one record after another, earning fantastic sums in ticket sales. A few advance prints of the film were sent to America; one was screened privately at The White House, where President John F Kennedy watched it. Kennedy was a fan of Bond author Ian Fleming; the two men had met in Washington, and in 1961 Kennedy had included ‘From Russia With Love’ among his top ten books. A matter of days after seeing the film (which was not shown in American cinemas until April 1964) the President made his fateful journey to Dallas, Texas. The film, famously starring the late Sean Connery as agent 007, is therefore likely to have been the last which Kennedy saw.

There is an obvious link between Sir Sean and Gibraltar: he was married here twice! His first wedding, in 1962, was to Australian actress Diane Cilento; thirteen years later he was back on the Rock, this time to marry Micheline Roquebrune. Sean and Micheline stayed together for 45 years.

‘From Russia With Love’ begins with a dramatic opening scene (which precedes the titles); until its trick ending we think Bond has been killed. We next see an exterior shot of Venice and its gondolas on the water, before the camera’s perspective shifts inside, to...a chess match! A notice reads “Venice International Grandmasters’ Championship.” Two men are playing chess on a circular stage in front of a large audience, their moves relayed on a giant demonstration board behind them. The names on this board inform us that Kronsteen (Czechoslovakia) has White against Macadams (Canada). The match is tied: 11,5-11,5. A waiter brings Kronsteen a glass of water. Under the glass, on a small paper mat, is a hidden message: ‘You Are Required At Once.’ Luckily Kronsteen has a won game; Macadams moves his king out of danger, but Kronsteen immediately checks again with his queen. After a few moments Macadams tips his king over. “My congratulations, Sir. A brilliant coup.”

The large room is elegant, with paintings and columns, flags, and an arbiters’ table. A sign reads: Silence. The stage is set on a carpet of alternate blue and gold squares. The audience is quiet until a move is made, then there is a gentle murmur. Kronsteen smokes. You hear the ticking of the chess clock. Both men wear suits; Kronsteen wears a dark bow tie. As he leaves the hall after winning there is loud applause. This magnificent and expensive set was built at Pinewood Studios in England.

It was apparently Sean Connery who recommended his Polish friend Vladek Sheybal for the role of the villainous Kronsteen. From the chess match the viewer is whisked off to a luxury yacht, where Kronsteen (“number five”) is seeing his boss Blofeld (“number one”), and fellow conspirator Rosa Klebb (“number three”). “I hope Kronsteen’s efforts as Director of Planning will continue to be as successful as his chess”, says Blofeld, gently stroking the white Persian cat in his lap. Reading more about the making of the film, I was intrigued to learn that the editor, Peter Hunt, switched around the order of the first four scenes. For dramatic tension he moved the chess match from a lower slot in the narrative arc right up to the start.

Looking around online I discovered pages of Vladek Sheybal’s memoirs. Of his time on this film, he writes that he had a “sort of disagreement” with producer Harry Saltzman, who announced in front of the crew that Sheybal would never again work in one of his films. Five years later Sheybal appeared in ‘Billion Dollar Brain’, alongside Michael Caine. The film was produced by Saltzman.

Just as Sean Connery has Gibraltar links, so too does Bond’s creator Ian Fleming, who came to the Rock in February 1941. He was here in connection with his work for British Naval Intelligence, secretly preparing the ground for an operation code-named ‘Goldeneye.’ When he later built his home in Jamaica he gave it this same name; all the Bond novels were written there.

Sean Connery’s last outing as 007 was ‘Never Say Never Again’, itself an unlikely return to the role: there had been a protracted legal dispute over rights, and in the same year (1983) Roger Moore - he and Connery were good friends - starred as the “official” James Bond in ‘Octopussy.’ Both films did well at the box office. Sean Connery worked for some months as consultant on “his” Bond before being persuaded to play the lead. He also worked on the script with thriller writer Len Deighton, who had (perhaps not coincidentally) been an early script writer for ‘From Russia With Love.’ Summing up his experience on what he must have known would be his last time as 007 Sean Connery said, “It should have been a great deal more pleasure than it was.”

I am not the right person to judge if today’s puzzle is hard or easy, or if it even makes much sense, but (for better or worse) I did compose it. Black’s king has fallen off the board, perhaps knocked over by a confident opponent reaching (à la Bond) for his vodka martini. The king stood on the only square where the White player could give checkmate in one move. Which square was it, and what would be the killer blow? Clearly Black’s king cannot already be in check. The solution is below.

In a curious parallel with the Kronsteen versus Macadams game described above, ‘Never Say Never Again’ also has two men playing chess right at the start. This time the setting is a house in what could be called a tropical-looking forest. The premises are some sort of stronghold for a gang; Bond throws a bomb down from the roof and brings the chess game to a sudden conclusion (before going on to rescue a kidnapped woman). Unfortunately, no-one told the actors that the chess board was placed the wrong way round: a silly error for such a big project. Ian Fleming would not have been amused. 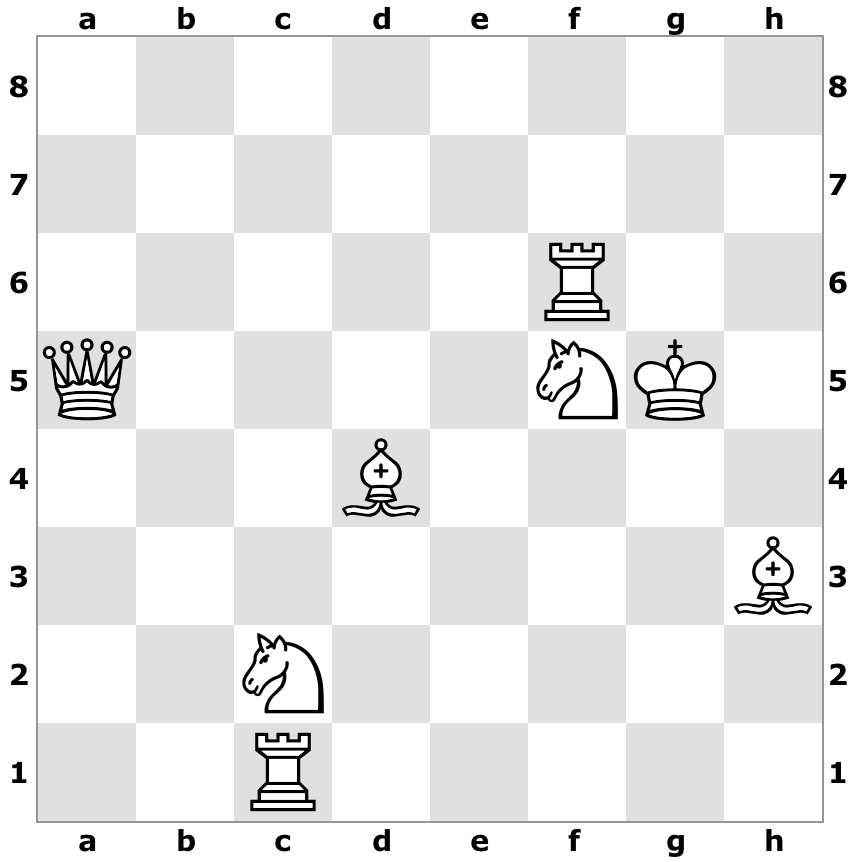 Solution: Black’s king stood on b3, when knight c2 to a1 is checkmate.