Into the Brexit unknown, a dis-United Kingdom exits the European Union

By Guy Faulconbridge and Andrew MacAskill

The United Kingdom left the European Union an hour before midnight on Friday, casting off into an uncertain Brexit future that also challenges Europe's post-World War Two project of forging unity from the ruins of conflict.

After the twists and turns of the Brexit crisis, the country's most significant geopolitical move since the loss of empire could be an anticlimax of sorts: a transition period preserves membership in all but name until the end of 2020.

Prime Minister Boris Johnson has given little clue to what the future holds, promising only to restore confidence for people and businesses.

"We'll be out of the EU, free to chart our own course as a sovereign nation," said Mr Johnson, the New York-born face of the campaign to leave the EU.

But the June 2016 Brexit referendum showed a nation divided about more than Europe and triggered soul-searching about everything from secession and immigration to capitalism, empire and modern Britishness.

Strains exacerbated by Brexit could even lead to the break-up of the United Kingdom: England and Wales voted to leave the bloc but Scotland and Northern Ireland voted to stay.

The EU, meanwhile, must bid farewell to 15% of its economy, its biggest military spender and the City of London, the world's international financial capital.

Some will celebrate Brexit, some will weep -- but many Britons will do neither.

At home, government advertisements proclaim the January 31 exit date while a newly minted 50-pence coin celebrates the end of 47 years of membership by imploring "peace, prosperity and friendship with all nations".

Brexiteers wanted bells to toll across the land but Big Ben will stand silent after a campaign to get it to 'bong for Brexit' failed; it was too expensive given repair work.

The protracted Brexit meltdown -- some say breakdown -- has left allies and investors puzzled by a country that was for decades touted as a confident pillar of Western economic and political stability. 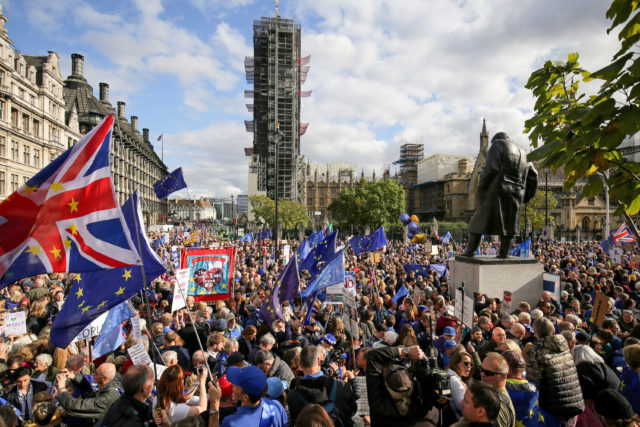 BREXIT FOREVER?
Leaving the EU was once far-fetched: the UK joined in 1973 as "the sick man of Europe" and less than two decades ago British leaders were arguing about whether to join the euro.

But the turmoil of the euro zone crisis, fears about mass immigration and a series of miscalculations by former Prime Minister David Cameron prompted the 52 to 48 percent vote to go.

For proponents, Brexit is a dream "independence day" for a United Kingdom escaping what they cast as a doomed German-dominated project that is failing its 500 million population.

"A very major country is leaving and maybe people should start to think about why that is," said Nigel Farage, who along with Johnson was one of the main leaders of the 2016 Brexit campaign.

"This European project wants to become an empire."

U.S. President Donald Trump has praised Brexit as a "great thing" and a smart move.

Some European leaders have suggested the United Kingdom might one day change its mind.

After the repeated failure of "Remainers" to unite, organise or win elections, the main hope of europhiles is that the economic impact of leaving will convince a new generation to plot a way back into the fold.

'A BETTER ENGLAND'
In east London's Dagenham, overwhelmingly pro-Brexit in 2016, Tommy Smith, 63, will celebrate with a dram of whisky on Brexit night.

"It is about time. I am hoping for a better England," the former delivery driver said.

"Hopefully it will reduce immigration and stop people coming here robbing the country and going home millionaires. There are too many immigrants," said Mr Smith, who said he hoped the government would spend more to help people like him.

The future, though, is unclear.

"Brexit is a reconceptualisation of our country, of our politics and of our place in the world," said Anand Menon, director of The UK in a Changing Europe think-tank.

"It is the most significant thing certainly to have happened in our history since the Second World War."

Opponents see leaving as a step back from the world that imperils both the United Kingdom and the European project that united a continent of democracies after millennia of conflict.

A diminished United Kingdom, they say, will still have to juggle the 21st Century rivalry between the United States and China -- but as a $2.7 trillion economy rather than as a leading member of the $18.3 trillion EU.

Trade talks with every major power -- including the EU -- loom while there is little clarity on what the United Kingdom's pitch to global investors will be.

For many, Brexit fatigue has set in already.

"Well I am not ready at all because I did not vote for it and I did not want it to happen, but now I just want it over," said Judith Miller, a resident of London.

"I am tired, I have had enough, I am sick of it on the news and we are just going to have to deal with it.”
(REUTERS)