Iran's President Hassan Rouhani said on Wednesday Britain would face "consequences" over the seizure of an Iranian oil tanker in British waters off Gibraltar.
Iran has demanded the immediate release of the Grace 1, which was boarded and seized last week by Gibraltar's law enforcement agencies and British Royal Marines on suspicion that it was breaking sanctions by taking oil to Syria.
"You (Britain) are the initiator of insecurity and you will realise the consequences later," President Rouhani said after a cabinet meeting, in remarks carried by Iranian state television.
"Now you are so hopeless that, when one of your tankers wants to move in the region, you have to bring your frigates (to escort it) because you are scared."
"Then why do you commit such acts (seizure)? You should instead allow navigation to be safe."
The Iranian president's comments are the late in a string of angry statements by Iranian officials following the detention of the Grace 1, which remains anchored in British waters under police guard off the east side of the Rock.
Earlier this week Iran's armed forces chief of staff, Major General Mohammad Bagheri, said the seizure of the vessel was "based on fabricated excuses" and would not go "unanswered", adding that Iran would give " give an appropriate answer" when necessary.
Last week Mousavi Jazayeri, an influential Iranian cleric and member of the powerful clerical body the Assembly of Experts, "Britain should be scared of Iran's retaliatory measures" over what he described as the "illegal" detention of the vessel.
The tanker's detention comes at a particularly sensitive time as tensions between the US and Iran grow over the unravelling of a 2015 nuclear deal, which President Donald Trump withdrew from last year. 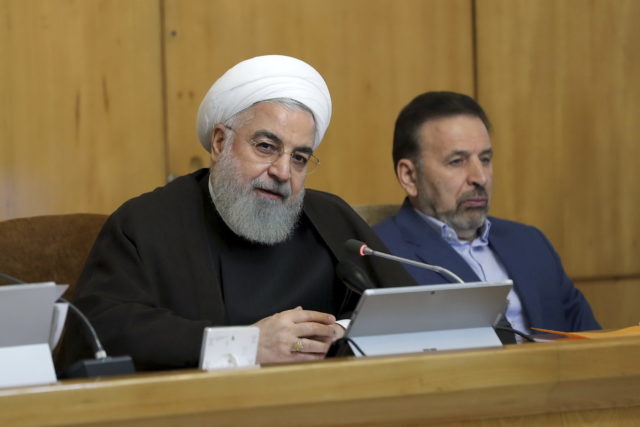 On Wednesday President Rouhani said Iran's decision to increase uranium enrichment would produce fuel for power plants and serve other peaceful aims, and that it was within the framework of Iran's 2015 nuclear deal with world powers.
He was speaking a day after European powers accused Iran of "pursuing activities inconsistent with its commitments" under the nuclear deal and called for an urgent meeting of the parties to the agreement.
"You (Europeans) do not need to worry about Iran, your concern must be over the United States, which has violated this whole commitment and undermined international obligations," he said.
Britain, Germany, France, Russia, China and Iran are the remaining parties to the deal, which the United States abandoned last year.
Hours later, as the UN nuclear watchdog held an emergency meeting on Tehran's breach of the nuclear deal, US President Donald Trump accused Iran of secretly enriching uranium for a long time and warned that US sanctions will be increased soon.
"Iran has long been secretly 'enriching,' in total violation of the terrible 150 Billion Dollar deal made by John Kerry and the Obama Administration. Remember, that deal was to expire in a short number of years. Sanctions will soon be increased, substantially!" President Trump said on Twitter.

Government launches phase two of the One Stop Shop for Business