Cyclists from the Windmill Wheelers Cycling Club completed the fourth leg of their journey from Roscommon in the West of Ireland to the Rock of Gibraltar yesterday.

They were raising money and awareness for a charity called Western Alzheimers, which provides help and respite care to families affected by Alzheimers/Dementia in the Western Region of Ireland.

The 19 cyclists left Madrid last Friday and made their way down through Spain, stopping in Consuegra, Almodóvar del Campo, Córdoba, Martín de la Jara and Gaucin.

The cycle has been done over the past four years, a leg of the journey each summer. Each year the number of cyclists grew with 11 of the original men being accompanied by eight other cyclists and their van driver. Some of the men have done two or three of the sections.

The original plan was not to cycle from Roscommon to Gibraltar, but lead cyclist John Murray explained how the destination of the Rock came to be.

“Well we just decided that we would cycle to Paris first and it sort of worked out so we said we would keep it going,” he said.

“From there we went from Paris to Lourdes and then we said, ‘where else could we head?’”

“Gibraltar was one of the most southern parts of Europe that we could get to fairly easily so we decided to go from Lourdes to Madrid the third year crossing the Pyrenees.”

“We have done about five days every year,” he added.

He admits that the cyclists found the final leg of their four-year journey tough.

The heat and the hill” were the biggest challenges for the cyclists who rode up to 150km each day with the distance covered depending on the heat and the mountains.

“It was one day that the heat was getting very bad so we started off at 5.45am, we had nearly two hours of cycling in the dark,” he said.

“That day when we reached Córdoba it was 40 degrees, which can be very dangerous.”

In previous years, some of the cyclists were hospitalised suffering from dehydration and this was something they vowed to avoid again.

The cyclists have raised money for different charities over the years, including raising €37,000 for a hospice. So far this year they will raise between €15,000 to €20,000.

“I chose this charity because Alzheimer’s has not got a lot of publicity in Ireland and the issue is getting bigger and bigger. My own Grandmother died from Alzheimer’s, everybody has someone that has been affected,” he said.

“I think for people who are at home minding someone with Alzheimer’s it is a very daunting task.”

“For Western Alzheimer’s to send out a nurse for two hours a day might not sound much but if you are sitting in minding somebody, it would be an essential outlet,” he added.

The men making up the cyclist range in age, with one being in his 70s, and who was more than able to raise the bike over his head in triumph as he reached Europa Point. 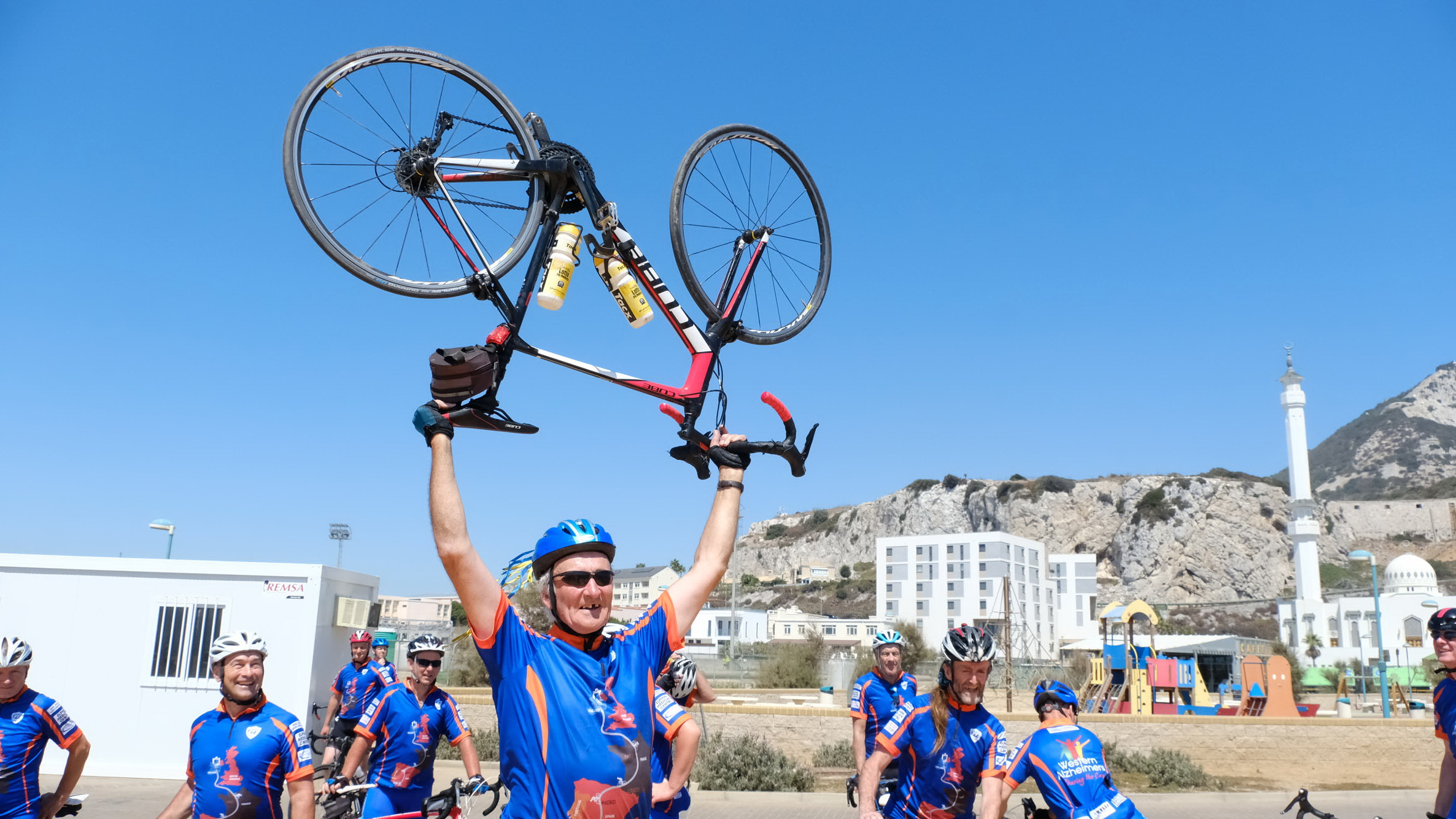 In addition, forming part of the team was a young man who is now 16 but he started the journey with his father four years ago when he was 13.

To support the cause go to https://www.idonate.ie/fundraiser/11380042_windmill-wheelers-cycling-club.html?fbclid=IwAR3G8yBKqKr2iAYzXPDSyFd5JH_xRv_Z7aWxdykHl6X0EqTW5UIlFnmwRR4