Changeable tides, hypothermia and even heart attacks are among the risks posed to those taking on the crossing between England and France.

Loretta Cox, a specialist trainer at the Channel Swimming Academy, said an average of 300 people a year attempt the 21-mile challenge, with many taking part in relay teams and needing up to two years to prepare.

The 63-year-old, who lives in Cornwall, said that on an average single crossing, a swimmer will make 55,000 strokes over the course of 15 hours.

"It's very unusual for people to do more than two crossings," she said.

"Two is exceptional, three, it was just about heard of, four is just mind-blowing, simply because you've got to be awake for so many hours.

"Most people would go into delirium, it's really exceptional to put your body through that kind of stress."

Ms Cox, who filmed Ms Thomas's final approach to shore at Dover, added: "One crossing, it's like doing three marathons back to back if you were running."

A successful English Channel swimmer herself, Ms Cox has achieved the triple crown, which also includes the 20-mile channel between Santa Catalina Island and the Californian mainland in the US and the 28.5-mile circumnavigation of Manhattan Island in New York.

She said the English Channel crossing is known as "the Everest of channel swimming" due its technical difficulty and cold water.

The swimming season typically runs between the second week of June to the start of October, with water temperatures ranging from 14C to 18C.

Swimmers need skilful senior boat pilots to time the start of a swim when there is flat water conditions and the tide is not ebbing or flowing - or risk battling strong currents, Ms Cox said.

She recommends trainees to use front crawl and to take on just 300ml of liquid nutrients thrown to them from a support boat every hour. 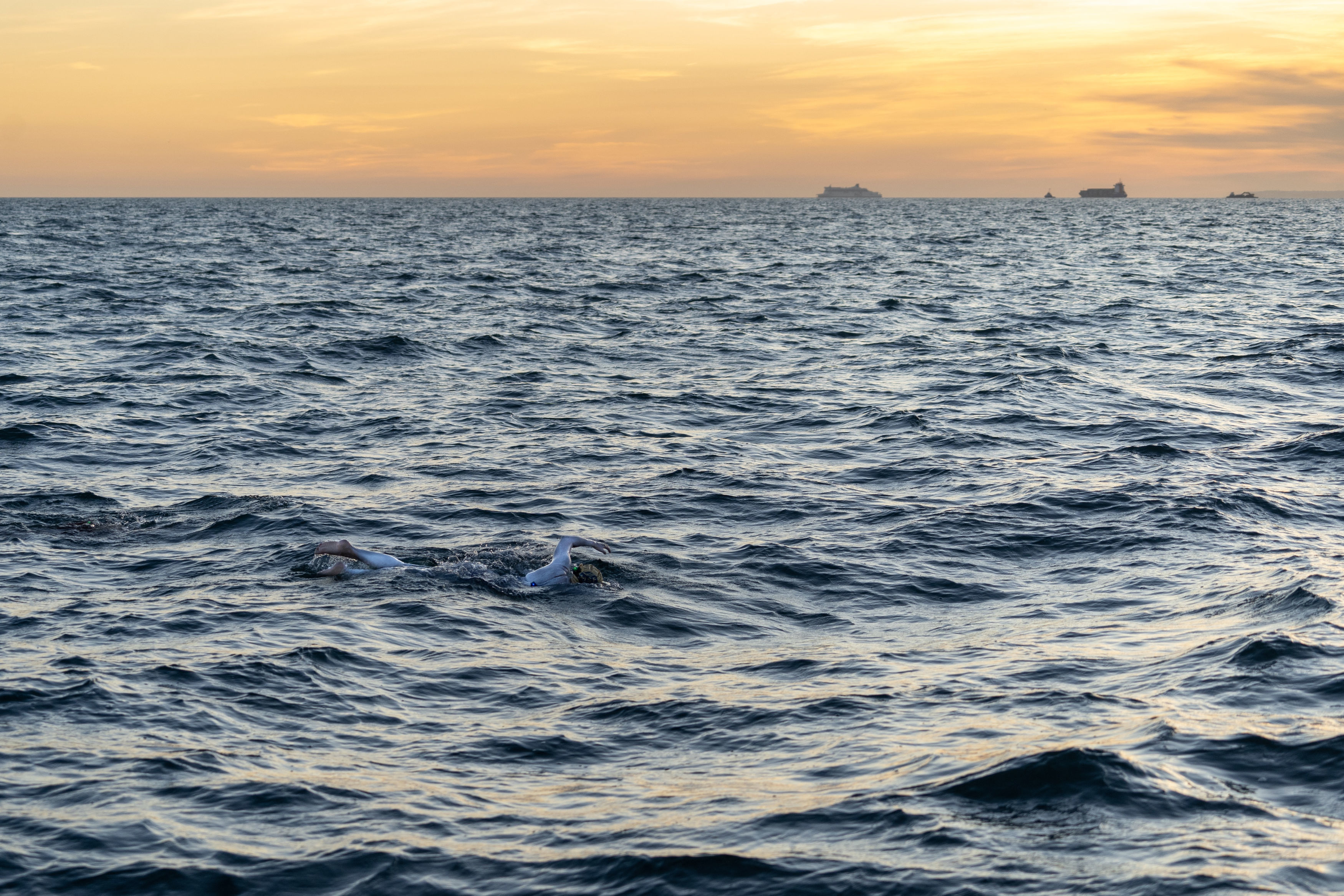 Ms Cox said swimmers have 15 seconds to swallow a drink, with just a one minute pause to feed causing them to lose 65 metres in progress.

"So you're going to want to use the stroke with the maximum amount of glide with the least amount of effort.

An ideal route for swimmers is to set out at night from the Samphire Hoe nature reserve in Kent and head towards Cap Gris-Nez in France.

Swimmers can pass seaweed mats full of jellyfish and floating waste - Ms Cox said she once even saw a fridge.

"There's nothing really untoward out there, occasionally you see the odd porpoise," she said.

Jellyfish leave "a nettle rash" type sting and water visibility can be as good as 20 to 30ft in open water, Ms Cox explained.

Busy shipping lanes, kept informed of swimmers by the coastguard, are also a challenge. She said: "It's like crossing a motorway... some of the boats are massive.

"Some of them can be 300 metres long and you're a speck in comparison."

Swimmers typically cover their necks, under arms and swim suit edges with grease to protect against the sun and salt water friction burns.

Lactic acid can build up behind googles leaving swimmers with puffy eyes after completing the challenge.

Ms Cox highlighted that swimmers can die during a crossing from "massive heart attacks", despite medical checks and qualifying swims being required beforehand.

"We do have people die. It's extremely sad when it does happen," she said. "If you're the person who is piloting or crew, it stays with you for life. It's horrible."

She added: "People who aren't aware of what they are doing, if they overstay their welcome they can succumb to hypothermia."

After describing all the combined risks and difficulties involved in a crossing, Ms Cox emphasised the scale of Ms Thomas's achievement.

"The fact that she has done this over the last couple of days is awesome," she said.