Karl Ullger in next round of Jackson’s Painting Prize

Local artist Karl Ullger has been selected for the second round of the Jackson Painting Prize, an international competition judged by leading figures in the contemporary art world.

Two of Mr Ullger’s artworks have proceeded to Round 2: Longlist Round, with the competition whittled down from 8949 artists to 400.

The Jackson’s Painting Prize competition promotes artists with a range of disciplines and styles with regards to fine art works in any painting or drawing media.

“I’m over the moon with the news as to be accepted a second year running is just overwhelming but especially with a star studded panel of judges and household names in the art world,” Mr Ullger said.

“The added bonus of also having two works accepted is just emotional and humbled at the same time to be drafted into the second round after competing against 8949 other artists and now there are only 400 of us.”

“Just feeling grateful already to be at this stage. Hopefully one or both works can squeeze itself into the last round although I know that is going to be hard seeing the calibre in this round.”

“The next round is withered down to 100 and from there the judges select their category winners.”

There are six different categories within the competition: Animals, Portrait/Figure, Landscape, Still Life, Abstract and Scenes of Everyday life.

“Last year my painting ‘Los Glacis’ got accepted for the first time making me the first Gibraltarian to have been accepted into the Jackson Painting Prize,” Mr Ullger said.

“This year I have had two paintings accepted for two different categories, Landscape and Scenes of Everyday Life.”
“My landscape painting is ‘Castle Steps Patio’ and my Scenes of Everyday life piece is titled, ‘Waiting for No One’.”

The painting is based on a hidden patio around Castle Steps in Gibraltar.

“An area of Gib that I walk and pass by every single day,” he said.

“It was during a warm October day which the sun light rays grabbed my attention on the side of my eye as I passed a rundown doorway.”

“One of the beautiful things about Gibraltar is its hidden patios and old town.”

“I adore just getting lost and exploring around the old town, whether being to plein air sketch or photograph.”

The second painting selected ‘Waiting for no one’ in the A Scene of Everyday Life Category is an oil painting on Moleskin Paper. 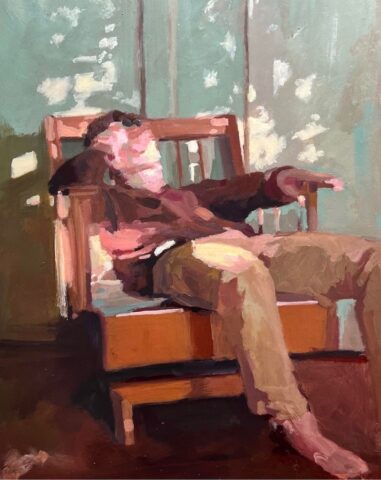 “A figure oil painting of a man lazing on a chair with the sun hitting his face causing an element of abstraction with the distortion of the face made of the extreme beautiful sun light,” Mr Ullger said.

“You can feel the heat and warmth on his face and in the room.”

“This piece sort of represented for me some of those moments this past year where we have been stuck at home sitting looking out of our windows waiting for those long lockdown days to pass.”