By Tony Jones
The Duchess of Cambridge revealed the majority of her trips outside her home have been to shop for food, as she carried out her first public engagement since lockdown began.

Kate toured Fakenham Garden Centre near her Norfolk home of Anmer Hall home on Thursday, and as a keen gardener wanted to learn how the coronavirus outbreak had affected the family-run independent business.

“They love it,” she said with a smile, adding: “It’s such a great space for children and families to come to garden centres.

“I’ve been food shopping but I have to say I haven’t been out a huge amount more but it’s good and so important, now as things start to ease, people know they can go out and particularly to places like this.”

The Cambridges have spent much of the lockdown at Anmer Hall with their children, and while unable to attend their usual royal events have been holding virtual visits to care centres and hospitals via video calls.

Kate also said she and William had found the social effects of the pandemic unsettling: “When we do our food shopping we notice that everyone keeps their head down and it’s hard for that social interaction.”

She also revealed that George loved to play with Venus flytrap plants at garden centres, and while at home the three children have been growing tomato plants.

“They were very excited to grow them from seeds and now they’re as tall as them,” Kate said.

Kate’s trip to the garden centre was followed by the Duke of Cambridge visiting Smiths the Bakers on Friday, which has been serving King’s Lynn for 50 years and reopened their premises on Monday after 11 weeks in lockdown.

Spending time outdoors is a cornerstone of the duchess’s work with youngsters, and something she encourages her children to do as much as possible.

She said: “It’s come up in so many different conversations whether it’s food, volunteering, and in all the mental health work that we’ve been doing, about how everyone is benefiting from being outside.

“So yes, they’ve been in lockdown but loads of families have been out on walks, more than they would do, outside.”

Mr Turner told her about some of the difficulties his garden centre, in Fakenham near King’s Lynn, had faced over the last three months.

“This has been the most challenging thing we’ve ever experienced. We completely shut until after Easter and then we opened for some collections and deliveries in the car park,” he told the duchess.

“We have 50 staff and we had to furlough around 15 due to closing the coffee shop and family members shielding or childcare issues. Four or five people have very unfortunately had to be made redundant, as going forward we can’t sustain them.”

But once they started to trade again three weeks ago, he said people had been keen to buy plants, to which Kate said: “There’s been a massive upsurge hasn’t there as people have been spending so much time outdoors and in their gardens.”

The duchess was delighted when Mr Turner told her that they had seen a lot of people who had never gardened before.
She said: “Really, that’s great, and now people have the time to do it.

“For those who are keen gardeners, have they struggled not being able to come in and maybe look or buy things?”
Mr Turner agreed and said one of the most difficult things had been trying to get hold of compost as it had been so popular.

The duchess asked: “What are people buying now? Is it vegetables or flowers or plants?” and nodded as she was told “annuals”. 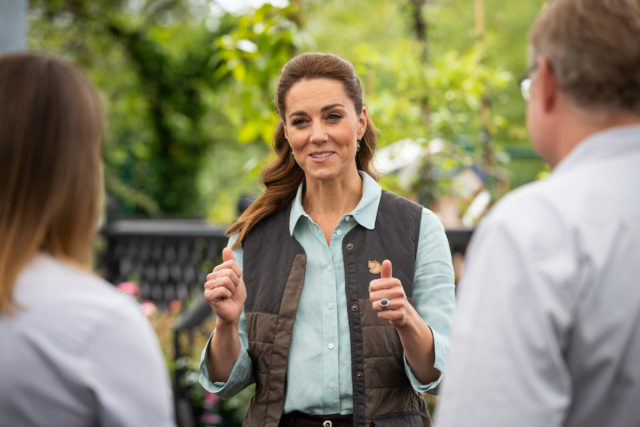 Kate, 38, respected social distancing guidelines during the visit and was casually dressed in Superga khaki trainers, brown jeans and a padded hunting waistcoat.

Meeting garden workers Michaela Giura, 35, from Norwich, and Tobias Davies, 47, she asked if they were glad to be back – smiling in agreement when they asked if she was too.

“It’s good to get a structure and a routine back isn’t it?”

The duchess also met Sam Wade, 53, from Fakenham, who had been working in the coffee shop but was retrained by daughter Polly Wade, 25, to use the tills.

Mr Wade said: “It’s amazing that Kate came and showed everyone we’re open for business. That’s exactly what the royals should be doing.”
(PA)

Names and people who live on in your memory, people like Mary Dolding