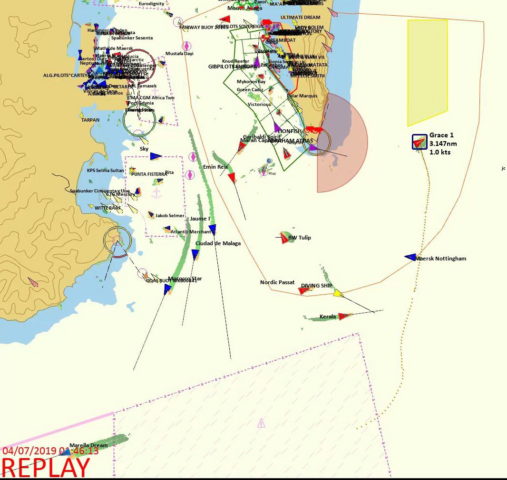 The Gibraltar Government has not commented on the origin of the crude, but Iran has confirmed that it is Iranian crude and has reacted angrily to what it described as an act of piracy.
"Iran is neither a member of the EU nor subject to any European oil embargo. Last I checked, EU was against extraterritoriality. UK's unlawful seizure of a tanker with Iranian oil on behalf of #B_Team is piracy, pure and simple," Iran's Foreign Minister Mohammad Javad Zarif tweeted on Monday, using 'B team' as a derisory term for the Trump administration.
Spain said last week that the UK had intercepted the ship at the request of the US.
But the Gibraltar Government said there had been no political request and that it had been legally obliged to detain the vessel because of its cargo and suspicions about its final destination, believed to be the Banyas refinery in Syria.
That refinery is owned by the Banyas Oil Refinery Company, which is the subject of EU sanctions under EU Regulation 36/2012. Those sanctions are directly applicable in Gibraltar.
The ship is currently detained off the east side of the Rock and members of its crew are being interviewed as witnesses.
Last Friday, Gibraltar's Supreme Court granted an extension allowing Gibraltarian authorities to detain the ship until July 19.