The RGP are currently recruiting for new Police Constables, exactly a year after the last intake started their recruit training. Those twenty recruits have now had about eight months’ experience of walking the beat so we asked three of them how things were going.

After leaving Westside School, PC Kianna Costa had been working in Child Care jobs whilst studying for an online degree in Business Studies.

‘But I had friends who were already enjoying life in the RGP and, when I saw the vacancy advertised, I thought that the job would suit me. I am a very determined person which is just as well because life in the police isn’t for everyone.’

‘I joined at the age of 24 which I think is the perfect age – it is really useful to have had a bit of life experience when you start your police career.’

As with all other recruits, she spent the first four months in Training School.

‘The Training Staff did an excellent job. They are very dedicated and they helped us as individuals. The training is tough but enjoyable and you make great friends while you are on the course.’

‘Since I finished my original training, I have also completed courses in Response (‘Blue Light’) Driving, in working in the Control Room and to be a Tutor Constable.

‘The highlight of my time so far has been to help a young boy who was living in some very difficult conditions. I can’t say any more because it’s an ongoing case.

‘One of the odd things is that you can arrest someone today and be behind them in a Morrison’s queue tomorrow. I know a lot of people in Gibraltar – and a lot of people know me!

‘It’s still early days in my career, but, so far, I’m loving it. It’s another world and every day is different. My family are so proud of me.’ 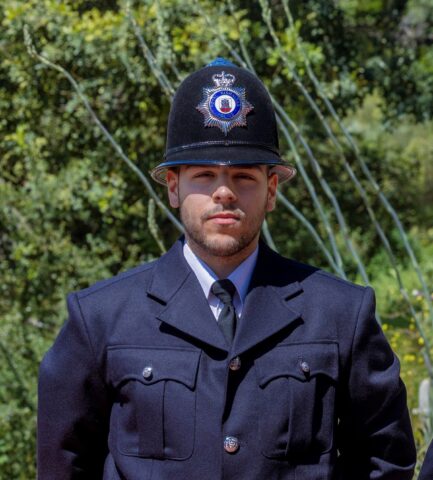 PC William Danino’s father and grandfather were both police officers in Gibraltar so perhaps it was natural that he should have wanted to join the RGP.

‘I wanted a job with real responsibility and I wanted to be ‘out and about’ every day. You have really got to want to do this job – it’s a more of a vocation rather than just a job because you can’t just switch off the moment you finish your shift.

‘In my case, the selection system dragged on and on because of Covid and then, once I’d been selected, Covid also affected our training. For instance, we couldn’t just go into town to walk along Main Street and talk to members of the public. We did lots of role-playing but it can never be the same as the real thing.

‘The Training staff were really excellent. They hit me hard with police discipline right at the start but they were always helpful and approachable.

‘Of course, once you’ve qualified, there’s a real adrenaline-rush when you get your first ‘blue light’ run into town. My first one was to sort out a fight in Ocean Village but there are lots of tasks that don’t fit quite so easily into the RGP job description. Members of the public turn to you for advice on a whole range of things but I love being out there talking to people and helping them – it’s brilliant. I see this as my job for life. When the time comes, I’d love to go for promotion because I take so much pride in the job I do!’ 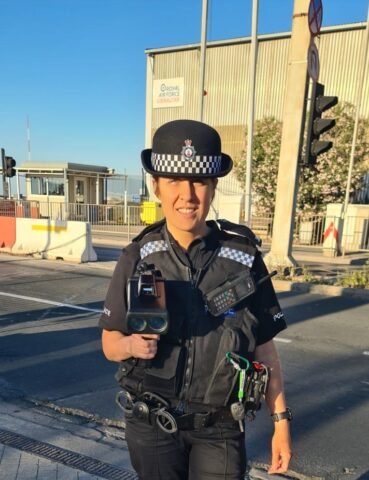 Someone else whose father and great grandfather were police officers is PC Polly O’Neil who grew up in Greater Manchester and, after graduating in Psychology, first joined Merseyside Police.

After 12 years in Liverpool, she applied to join the RGP and found that she had to start again as a raw recruit.
‘It was a bit of a shock after being a senior Constable to start right at the bottom again. But Gibraltar’s laws are slightly different to those in UK and I made lots of new friends so I’m glad that I had to do the Recruits’ course. I had some massive advantages over the others but I still had to prepare for the weekly test and make sure that I always passed it.

‘I find that, after UK, the standards are higher in the RGP. Our appearance must always be spot-on, officers must have greater knowledge of the law and there is more emphasis on punctuality – for absolutely everything!’

How has she found her first year on the beat in Gibraltar?
‘Well. For a start, it was unusual actually to be on the beat. In Merseyside we were always in cars and we hardly ever walked the streets – and now, I find that I actually enjoy meeting people and having a chat. Dealing with the public here is so much nicer and much less confrontational. Even the bad guys say ‘Hello’ to you!!

‘The RGP has much more of a family atmosphere. We all help each other and, if someone needs support, we all get stuck in. You quickly get to know everyone and everyone gets to know you. And the senior officers here are really approachable.

‘As soon as I finished Training School, I qualified as a Response Driver so I regularly respond to serious events and, as a woman, I can honestly say, that I am never treated any differently than my male colleagues.

‘On the downside, I don’t speak Spanish which does mean that I sometimes need help from one of my colleagues.

Another downside is the huge amount of paperwork in this job. It can be a pain and you need to be very organised to keep on top of it.

‘But I love the lifestyle in Gibraltar and I have already suggested to some of my friends in UK that they might want to consider moving out here.’

So, it seems that last year’s recruits have quickly settled into life at New Mole House and that they will soon be passing on the value of their experience to this year’s new kids on the block.