Lego lockdown creativity goes on show as from next week

Brick by brick, many Rock residents created unique pieces as well as kit pieces of Lego which will be on display in an exhibition at the John Mackintosh Hall next Tuesday.

The Creatives Exhibition with Lego Bricks consists of approximately 160 different pieces, ranging in a variety of sizes from just centimetres to several feet high.

Giovi Viñales from Gibraltar Culture Services explained that the exhibition is a result of an expression of interest they issued during lockdown earlier this year.

“We heard that apart from the Lego enthusiasts who are building all year around, there were people at home during lockdown and getting into Lego,” she said.

“We put it out there and we got quite a good bit of interest to be honest.” 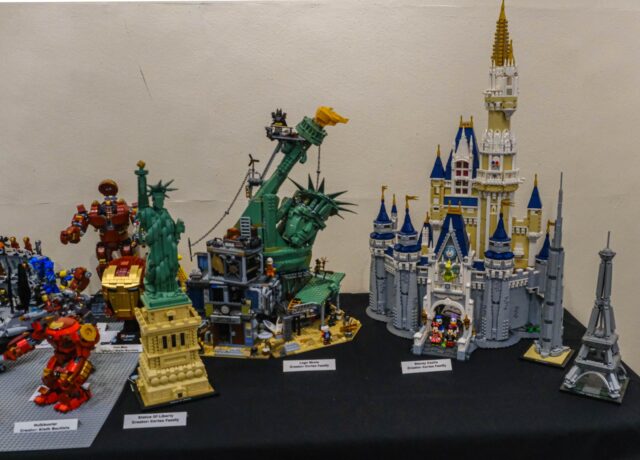 GCSoriginally wanted to launch the exhibition during National Week but due to Lego copyright needing to be cleared, they would not have had all the necessary approvals in time.

“We had to obtain permission from Lego itself because of the trademark,” she said.

“So Minister John Cortes was the one who actually contacted their CEO and they were really pleased that Gibraltar was holding an exhibition."

“And all we had to do is get our promotional material okayed by them because we were using the Lego logo.”

“The first sample of the poster we sent they absolutely loved, there was no problem or no hesitation whatsoever.”

Following on from the expression of interest and approval from Lego, GCS launched the invite for people to take part in the exhibition.

All week people, of all ages have been dropping off their creations to the John Mackintosh Hall for it to be laid out and ready for the opening of the exhibition next Tuesday.

Due to the fact that some pieces are rare, collectors’ items, unique and also given the fact that Lego itself is not cheap, there will be a security guard on the door from 9am to 7pm while the exhibition is open.

In addition, people will not be allowed to touch the displays as they are cordoned off with rope. There will be a maximum capacity of 16 people in the room at any one time, in line with Covid-19 restrictions.

“The turnout has been way more than we thought, we have over 160 pieces,” she said.

“There arealso a few Rocks of Gibraltar as well, and of course the normal Star Wars, Harry Potter and Disney castle a wide variety.”

She said that the enthusiasm from people has been amazing and that even though the exhibition has not opened yet people are already talking about next year.

“We don’t know if we will do one next year but gauging from the interest that we have had this year I keep my fingers crossed to turn it into an annual event,” she said.

“And, from year to year hopefully it will get bigger and better and from this year we can learn for next year.”

This year it is an exhibition but future events may be of a competition nature. GCS will wait and see how this year’s exhibition goes before committing to further events.

The exhibition runs from November 17 to December and is open 9am to 7pm at the John Mackintosh Hall.